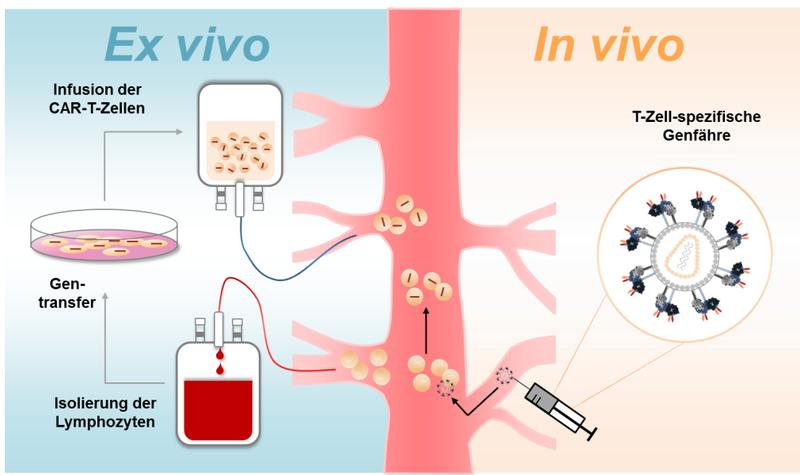 In August 2018, two CAR T cell therapeutics obtained marketing authorization from the European Commission. They provide efficacious treatment options for patients suffering from certain forms of leukemia and who have not responded to other treatment options. However, manufacturing CAR T cells that are composed of genetically engineered patient immune cells is laborious: the cells are taken from the patient, genetically modified with the CAR, multiplied and then reinfused. Researchers of the Paul-Ehrlich-Institut (PEI) succeeded in animal experiments to engineer CAR-T cells directly in the living organism. EMBO Mol Med reports on the research results in its online issue of 17 September 2018.

This therapy resulted in some patients, who had not profited from standard care, in the complete elimination of cancer cells and their absence over many years. Manufacturing such products is however laborious: The cells have to be harvested from the patient, must be genetically modified outside the body and then reinfused. Moreover, the distinct steps of this process can inadvertently alter the immune cells and their activities.

Researchers led by Prof Christian Buchholz at the Paul-Ehrlich-Institut, head of the research group „Molecular Biotechnology and Gene Therapy“ of the Paul-Ehrlich-Institut, succeeded within a research project funded by the German Cancer Aid together with collaboration partners, in achieving this genetic modification of human T cells directly in vivo, i.e in the living organism. The key factor for this success were specifically modified lentiviral vector particles transferring the CAR gene selectively into those T cell subtypes being responsible for cancer attack. For their proof-of-principle demonstration, the researchers used mice that had been equipped with human blood cells. A single intravenous injection of the vector particles was sufficient to generate sufficient numbers of CAR T cells that became detectable in blood and lymphatic organs. These in vivo generated CAR T cells proliferated upon antigen contact and eliminated CD19-positive cells. As observed in clinical applications, some animals experienced cytokine release syndrome and neurotoxicity.

This is the first proof-of-concept demonstration that human cytotoxic T cells can be reprogrammed into CAR T cells and kill target cells. The implications of these results are plentifold: The animal model will facilitate research into the side-effects caused by CAR T cell therapy. The technology of genetically modifying T cells in vivo will be potentially applied in other fields of immunotherapy. Finally, the results form the basis to transform the CAR T cell therapy from an individualized into an universally applicable therapy. This could impact the economic feasibility of this therapy enormously, but, requires, however, a series of preclinical studies first.

The Paul-Ehrlich-Institut, the Federal Institute for Vaccines and Biomedicines, in Langen near Frankfurt/Main is a senior federal authority reporting to the Federal Ministry of Health (Bundesministerium für Gesundheit, BMG). It is responsible for the research, assessment, and marketing authorisation of biomedicines for human use and immunological veterinary medicinal products. Its remit also includes the authorisation of clinical trials and pharmacovigilance, i.e. recording and evaluation of potential adverse effects.

Other duties of the institute include official batch control, scientific advice and inspections. In-house experimental research in the field of biomedicines and life science form an indispensable basis for the manifold tasks performed at the institute.