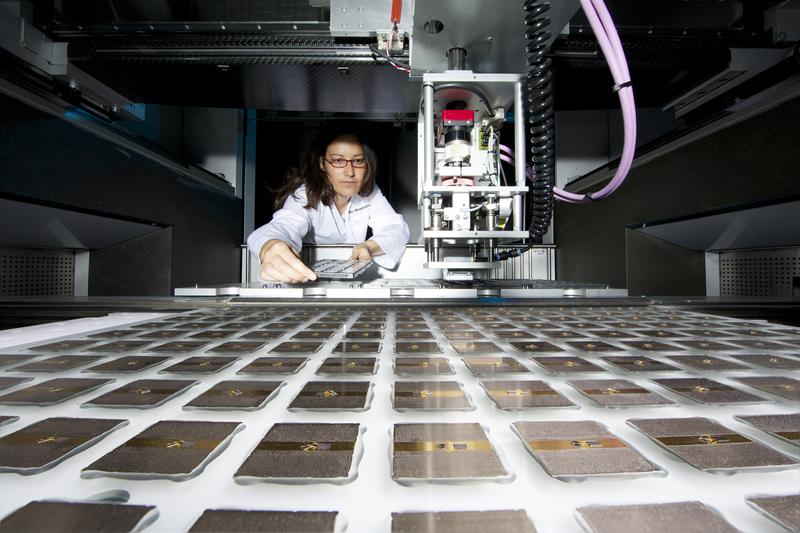 Photovoltaics is booming worldwide. If one considers PV installations in 2017, Europe has lost its pioneering role and now holds fourth place behind China, the USA and India. On the other hand, Europe is leading worldwide in PV research and development as demonstrated by the 35th European PV Solar Energy Conference and Exhibition EU PVSEC, held this year in Brussels from 24-28 September 2018. Fraunhofer ISE, Europe’s largest solar research institute, is represented at the conference with over 60 contributions in the form of talks, posters, session chairs and two plenary speeches as well as a booth at the exhibition.

“This year’s European PV Solar Energy Conference has a symbolic character not only because it is held in Brussels,” remarks Dr. Andreas Bett, Institute Director of Fraunhofer ISE. “The conference is taking place at a historic time, when highly relevant discussions on the preservation of European photovoltaic production are occurring that will set the course for Europe’s future energy system based on renewables.”

Due to the large cost reductions in monocrystalline silicon wafers over the past months, manufacturers of multicrystalline wafers experienced increasing competitive pressure. As a result, they switched from the conventional slurry-based slicing process to one based on diamond wire sawing, a process widely used for monocrystalline silicon. Through this changeover, the six-hour sawing process was shortened to less than three hours. The diamond-cut technology presents, however, a big challenge for the multicrystalline material. Technological solutions had to be found, also with respect to solar cell manufacturing. “Up to now, there has been little discussion about the metrology used for the quality assurance of the wafer specifications,” says the speaker Dr. Jonas Haunschild, Group Head of Inline Wafer Analysis and Image Processing at Fraunhofer ISE. He adds: “The talk gives an overview of the current in-line characterization methods, in which special attention must be given to the challenges facing inline metrology of the diamond sawn multicrystalline wafers.”

Concentrator Photovoltaics with the Highest Efficiency

The second plenary talk from Fraunhofer ISE presents the results of the European funded project CPVMatch. The title of the talk is “Final Results of CPVMatch – Concentrating Photovoltaic Modules Using Advanced Technologies and Cells for Highest Efficiencies.”

The focus of the CPVMatch project is the industrial implementation of the highest efficiencies for concentrator modules based on multi-junction solar cells, and therewith to close the gap between research results and production. Under the leadership of Fraunhofer ISE, the consortium, consisting of research and industry partners from Germany, Italy, Spain and France, developed solutions for achieving this goal. The plenum speaker Dr. Gerald Siefer, Group Head of III-V Cell and Module Characterization at Fraunhofer ISE, explains the objectives of the project: “We addressed all of the process steps involved in manufacturing concentrator modules: from the materials used, the cell fabrication process and the production equipment through to the challenges arising in the module production.” Siefer sums up the results: “Two important results are as follows: By using innovative cell architectures for multijunction solar cells and using new materials, processes and manufacturing equipment, the manufacturing costs for four-junction solar cells could be optimized, while maintaining spectral matching. Secondly, we improved the design of high concentration modules, primarily by improving the optical elements. Thus, we measured outdoor efficiencies of over 40 percent for a submodule with achromatic lenses.”

The venue of the 35th EU PVSEC is the SQUARE – Brussels Meeting Centre. A summary of Fraunhofer ISE’s scientific contributions is found on our website: https://www.ise.fraunhofer.de/en/events-and-trade-fairs/eu-pvsec.html

The exhibit booth of Fraunhofer ISE is found at location “B9”.

For the first time, Fraunhofer ISE is setting up a Twitter Wall, a digital bulletin board, where all Twitter messages about Fraunhofer ISE at the EU PVSEC are posted. The wall goes on line as of 24 September 2018: Science Blog Innovation 4E: https://blog.innovation4e.de/en/