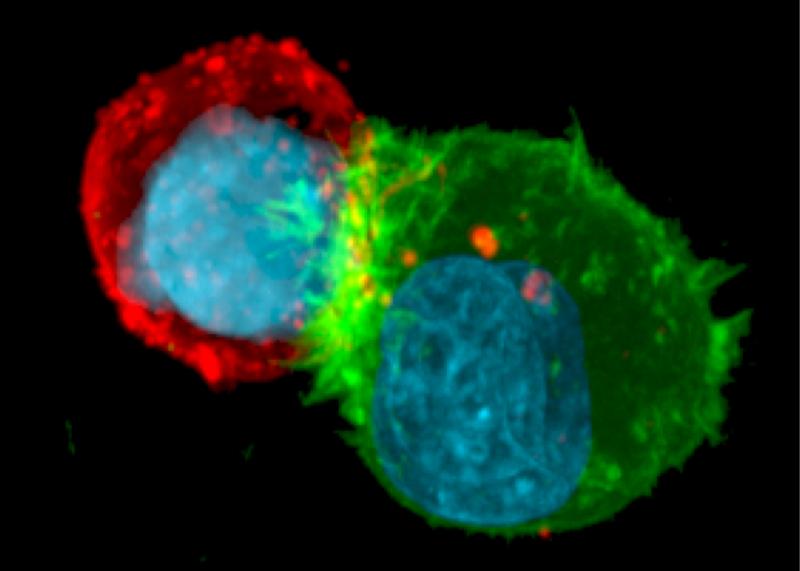 The Laboratory of Experimental Cancer Research at LIH’s Department of Oncology conducts clinically oriented research aiming at understanding how cancer cells evolve progressively and acquire aggressive features. Within this laboratory, the “Cytoskeleton and Cancer Progression” research group, led by Dr. Clément Thomas, focuses in particular on the actin cytoskeleton and related signaling pathways in the context of breast cancer. The actin cytoskeleton is essential for maintaining the shape of cells and enabling motility, and plays critical roles in tumor cell invasion and metastasis. Until now it remained unclear whether the cytoskeleton also contributes to immune evasion, rendering cancer cells resistant to attacks by the immune system.

Cancer cells are able to develop resistance to immune attack by escaping from NK-mediated cell death. Tumor immune escape is a major hurdle limiting the efficacy of current immunotherapies. In the present research work, Dr. Antoun Al Absi, Dr. Thomas and co-workers investigated whether the actin cytoskeleton plays a role in immune evasion. ‘When NK cells or cytotoxic T cells get in contact with target cells, a so-called immunological synapse is formed’, explains Dr. Thomas. ‘This contact interface allows NK cells to focus and release cytotoxic granules toward the target cells leading to their killing. It is well known that rearrangement of the cytoskeleton inside NK cells is necessary for the formation of the immunological synapse and granule release to the target cells. However, the organization of actin filaments in target cells remains poorly explored. This gave us impulse to investigate what happens with the cytoskeleton of cancer cells in contact with NK cells.’

The scientists thus took a closer look at possible alterations of the actin cytoskeleton in breast cancer cells comparing NK-mediated cytotoxicity resistant and susceptible cell lines. They revealed that all the cell lines they investigated contain two subpopulations: one showing a very prominent accumulation of actin filaments at the level of the immunological synapse, and one with no such accumulation. ‘When using high-throughput imaging flow cytometry we observed that actin massively concentrates at the immunological synapse in tumor cells resistant to NK cytotoxicity, indicating a causal link between this actin response and resistance,’ states Dr. Al Absi who conducted the major part of the experimental work.

The team next analyzed the effects of the actin rearrangement in cancer cells at the molecular level. ‘We observed a difference in the density of ligands on the surface of cancer cells’. On cells with an actin response, a significant increase in immune-inhibitory ligands such as HLA-A, -B, -C and the immune checkpoint protein PD-L1 was found at the contact site with NK cells. On top of that, we detected that a lower amount of the cytotoxic protein granzyme B reaches the resistant target cell,’ explains Dr. Al Absi. The researchers thus concluded that the actin response protects cancer cells from lysis by limiting the accumulation of granzyme B. They are currently evaluating the hypothesis that the actin response actually drives the local recruitment of immune-inhibitory ligands to alter the cytotoxic function of immune cells.

Finally, to validate their results, Dr. Al Absi and co-workers also monitored the actin response using primary NK cells isolated from donors to exclude that the phenomenon is solely observable with the NK cell line initially used for the study. Indeed, the actin response and its protective effects were also observed in this context.

The present research work revealed a new fascinating mechanism by which cancer cells escape from the immune response and may pave the way for new cancer treatment options. ‘The actin response that drives breast cancer cell resistance to NK-cell mediated cell lysis presents an interesting therapeutic target,’ stresses Dr. Thomas. ‘We now need to investigate the molecular pathways that underlie the actin response and search for components that could be directly targeted by drugs. We hope that we will find a way to sensitize resistant cancer cells to NK cell-mediated cytotoxicity as this would considerably improve the efficacy of NK cell-based immunotherapy. Moreover, we are now evaluating the possibility that the actin response also provides resistance against cytotoxic T cells.’

This research work is a major part of the PhD thesis of Dr. Antoun Al Absi who graduated in July 2018 and was supported by an AFR PhD grant from Luxembourg National Research Fund (FNR). The research team is supported by further research grants from the FNR, F.R.S.-FNRS Télévie and the Luxembourg Cancer Foundation “Fondation Cancer”.

The project was mainly carried out at the Laboratory of Experimental Cancer Research at LIH’s Department of Oncology under the lead of Dr. Clément Thomas and included a collaboration with the National Cytometry Platform at LIH’s Department of Infection and Immunity and the INSERM unit “Immunologie Intégrative des Tumeurs” at the Gustave Roussy Institute in Villejuif, France.