Is foraging behaviour regulated the same way in humans and worms? 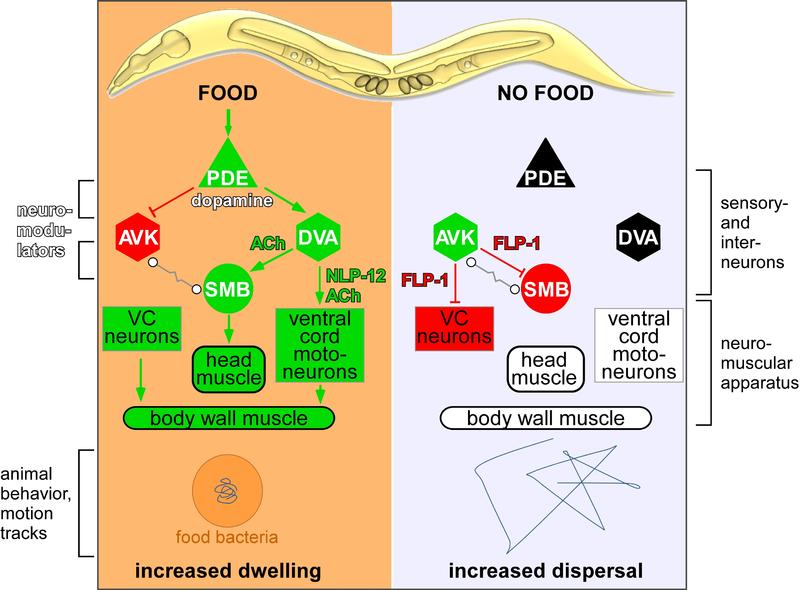 FRANKFURT. How does our nervous system motivate us to get off the sofa and walk to the fridge, or even to the supermarket, to get food? A research team led by Alexander Gottschalk from Goethe University investigated this using the threadworm Caenorhabditis elegans. The results indicate how foraging behaviour in higher animals might have evolved.

Finding food and staying at a food source are crucial survival strategies in the animal world. But how are external feeding signals on the molecular, cellular and neuronal circuit level transformed into behaviour? To find out, neuroscientists often resort to less complex model species such as the nematode C. elegans. It only has 302 nerve cells and its network of connections has been precisely mapped, allowing scientists to investigate in detail how its nerve cells communicate with each other to achieve certain types of behaviour.

Alexander Gottschalk and his team focused in this study on a neuronal circuit involving a pair of sensory nerve cells that detect the presence of food, and release the neuromodulator dopamine. This dopamine signal affects two types of downstream neurons, termed DVA and AVK and, as the team discovered, it does so in opposing ways. Dopamine activates DVA, promoting dwelling and local search behaviour, while inhibiting AVK, which promotes dispersal and long-range search behaviour. Specifically, this takes place by DVA and AVK signalling to further downstream motoneurons, which in turn control muscle activity.

But what conclusions does this allow regarding foraging in higher animals such as humans? In the worm, the DVA neuron modulates locomotion by signalling to motoneurons via the neuropeptide NLP-12. Mammals have an equivalent to NLP-12, the neuropeptide cholecystokinin. Its release is also regulated by dopamine signalling, for example in reward-related behaviour like feeding. This shows that during evolution, the importance of dopamine and the neuropeptide cholecystokinin/NLP-12 as neuromodulators has been conserved. They influence motivated behaviour in the search for food intake, but also other actions, if rewarding sensations can be actively gained by certain behaviours.

The neuron AVK, which acts as an antagonist to the DVA neuron, releases a neuropeptide called FLP-1 in the absence of food. FLP-1 acts as a counterpart to NLP-12/cholecystokinin in the worm. Although FLP-1 is more likely to be invertebrate-specific, similar 'RF-amide' neuropeptides are found in mammals, where they also control food intake.

Thus, similar inhibitory balancing of cholecystokinin signalling may also be found in mammals. The C. elegans neuron types identified in this study may thus provide important guidance in the search for similar cell types in mammals where myriads of cells mediate similar mechanisms of motor control.

Goethe University is a research-oriented university in the European financial centre Frankfurt The university was founded in 1914 through private funding, primarily from Jewish sponsors, and has since produced pioneering achievements in the areas of social sciences, sociology and economics, medicine, quantum physics, brain research, and labour law. It gained a unique level of autonomy on 1 January 2008 by returning to its historic roots as a "foundation university". Today, it is among the top ten in external funding and among the top three largest universities in Germany, with three clusters of excellence in medicine, life sciences and the humanities. Together with the Technical University of Darmstadt and the University of Mainz, it acts as a partner of the inter-state strategic Rhine-Main University Alliance. Internet: www.uni-frankfurt.de