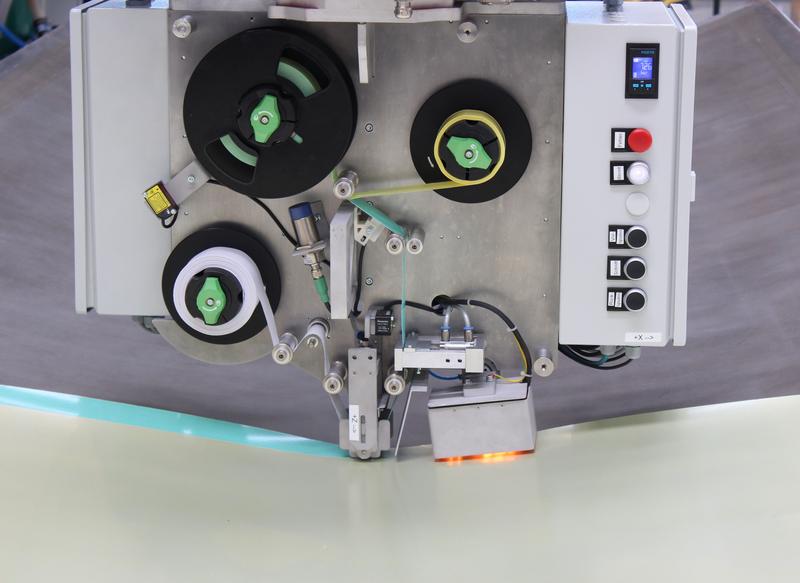 Automation is a key strategy for combating production bottlenecks in the aircraft manufacturing industry. The newly developed end effectors are designed for standard industrial robots for automated adhesive film placement and stringer integration in the manufacture of aircraft fuselages. These end effectors not only increase the production rate with no loss of quality but also lower the production costs. The current manual procedure also requires more process steps to achieve the same result.

The automation solutions developed in the „NFM-Glare” sub-project by the experts for Automation and Production Technology at the Fraunhofer Institute for Manufacturing Technology and Advanced Materials IFAM in Stade exceed Technology Readiness Level 5 (TRL 5). This means that the technologies have already been validated in a manufacturing environment at near-production speeds on approximately 2 x 6 meter prototypes.

Structure of components made of fiber metal laminates (FMLs)

FML components consist of aluminum sheets of 0.3 or 0.4 millimeters thickness alternating with glass fiber prepreg layers. These multiple layers create barriers that suppress crack propagation and hence give rise to components having greater resistance to damage. The manufacture of FML components requires the placement of adhesive film strips that connect the aluminum sheets with each other. In the project, double-sided adhesive strips were automatically placed on metal sheets with the adhesive film end effector. This was carried out to join the sheets together and also to secure the longitudinal stiffening elements (stringers) after they had been positioned on the fuselage section by two cooperating robots.

The adhesive film end effector is very compact and weighs only 75 kg. As such it can also be used on small robots in spatially restricted situations. It is able to cut, place, and press down double-sided adhesive tapes of any length from a few millimeters up to 50 meters onto flat, curved, and double curved surfaces. This is achieved via a control circuit that applies a constant tension to the adhesive tape. This tension enables effective unrolling and precise placement of the adhesive tape. The operator only has to enter the desired tension on the control panel and then everything else takes place automatically. A user-friendly control panel was developed with self-explanatory images, so enabling even inexperienced operators to quickly learn how to control the system.

With slight modification the end effector can also be used for the precision placement of other types of materials on other component surfaces, provided these materials are on rolls. The placement accuracy is ±1 millimeter. In order to minimize the downtime when using the technology in industrial application, the entire path planning of the end effector is undertaken offline.

The measurement technology integrated into the adhesive film end effector precisely records the contact pressure, ambient temperature, air humidity, and many other parameters in order to monitor that conditions are optimal for the adhesive bonding process. This guarantees inline quality assurance.

The current manual integration of 6 meter long stringers in aircraft production proved a challenge for automation in the project. Although stringers act as stiffening elements for aircraft, the fact that they deform critically if only held at one or two points created a challenge for an automated process. In addition, Z-profile stringers were used. These are not symmetrical around the center axis leading to twisting when being lifted. In order to take account of the deformation behavior, to grip a variety of stringer profiles, and to prospectively integrate even longer stringers it became clear that it was not possible to handle the stringers with just a single gripper. A system with two grippers was thus chosen, each fitted to its own robot. For the handling, one robot followed the path of the other robot at a defined distance. In order to avoid deformation of the stringer during handling, the path planning was carried out offline. A collision test was performed at the same time.

The grippers automatically adapt to the length as well as the thickness of the stringer and can grip stringers of differing geometries. With slight modification to the guide rollers almost all stringers can be integrated with the grippers. The heating of the adhesive film under the stringer, the contact pressure, and the integration speed can be varied as desired and are recorded during the entire process for quality assurance purposes. The grippers compensate unevenness in the stringers so ensuring integration within the force and temperature specifications.

Other R&D work in the „NFM-Glare“ sub-project

The experts for Adhesion and Interface Research as well as Plasma Technology and Surfaces at Fraunhofer IFAM in Bremen along with the Fraunhofer Institute for Material and Beam Technology IWS in Dresden have developed alternative pre-treatment techniques for sheet aluminum and new FML production processes.