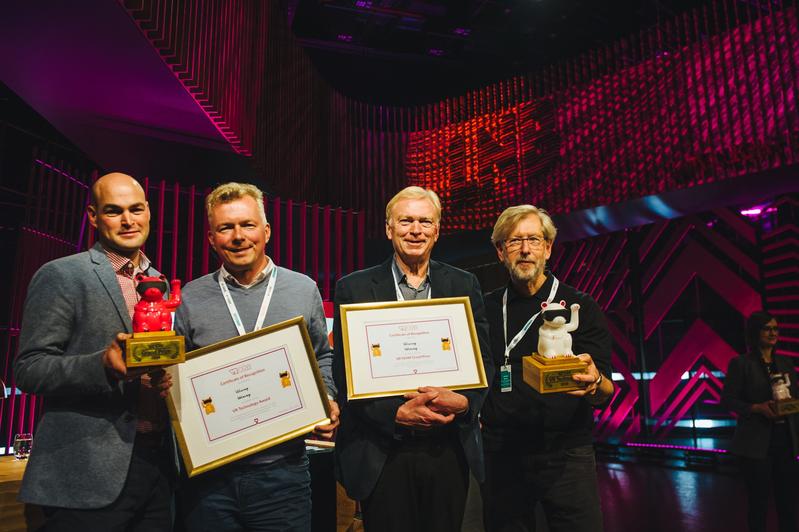 At the 3rd International VR NOW Awards for Virtual Reality, Mixed Reality, Augmented Reality and 360 degree video in Potsdam-Babelsberg, the volumetric video studio Volucap, in whose development the Fraunhofer Heinrich Hertz Institute was significantly involved, was awarded twice. In addition to the "VR Technology Award" that honors the most technologically advanced Virtual Reality projects, tools, services and hardware, the Volucap also received the "VR NOW Grand Prize". This award honors the highest quality and most innovative project of the year which is selected by the main jury from all nominated projects.

Volucap is the first commercial video studio on the European continent, in which people and objects can be scanned three-dimensionally and lifelike. The studio is located on 170 square meters in the fx.center at Studio Babelsberg and is equipped with 32 cameras which are installed all around on a nearly 4 meter high light rotunda. The associated basic technology was developed by Fraunhofer HHI. The technology "3D Human Body Reconstruction" does not create digital avatars, but creates hologram-like representations of real people that can be processed like computer-generated models. The actors recorded in this way can be placed into real and virtual worlds. It is also possible for spectators to enter these worlds with the help of VR technology and view the events and the person photographed or the object photographed from every possible angle.

It is not only in the film industry that completely new possibilities for narrative forms towards "walk-in film" arise. As the first commercially used studio on the European mainland, the new technology can also be used for professional commissioned productions in many areas of media beyond entertainment such as in medicine, automotive or the games industry. Compared to the existing solutions, including studios in London and San Francisco, Volucap is pursuing a new concept that is future-oriented towards an even higher quality and will also be used for cinema productions in the long term. For commercial use, the shareholders ARRI Cine Technik GmbH & Co. Betriebs KG, Fraunhofer-Gesellschaft, Interlake System GmbH, Studio Babelsberg AG and UFA GmbH founded the joint company Volucap GmbH.

More information and all winners: https://www.vrnowcon.io/awards/