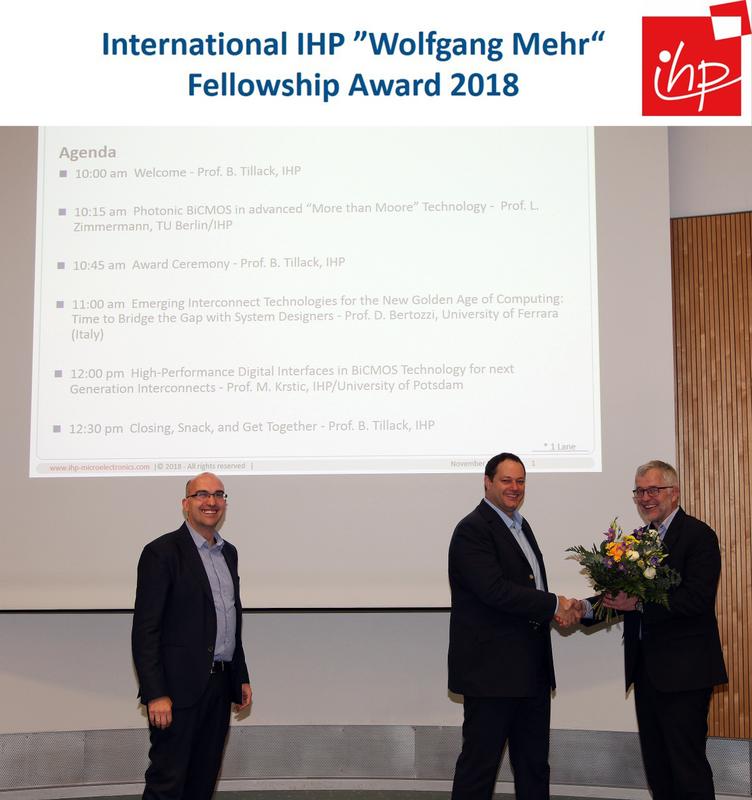 Prof. Davide Bertozzi has been today awarded with the International IHP "Wolfgang Mehr" Fellowship Award 2018 at the IHP – Innovations for High Performance Microelectronics. The Italian receives the prize for his research in the field of electrooptical interconnect technologies, which bridges the research areas of system design and semiconductor technology, that are also thorougly researched at IHP. The synergies that are potentially generated Prof. Bertozzi sees as a possibility for a new golden age of computing. Silicon photonics, which is also in a research focus of IHP, is gaining momentum as an emerging interconnect technology in the context of small-scale systems and has unprecedented market growth. It enables the transmission of extremely high data rates and is therefore the basis for big data applications. The research of Prof. Bertozzi is focused on exploring the possibilities for wider impact of IHP technology also for such high-end applications.

Prof. Davide Bertozzi leads the MPSoC Research Group at the University of Ferrara in Italy. With a cross-layer approach that leverages the enabling features of communication architectures and technologies, he has the mission to stay at the forefront of system innovation. Previously, he collaborated and made research at international academic institutions such as Stanford University and large semiconductor companies (NEC America Labs, NXP Semiconductors, STMicroelectronics, Samsung Electronics). His scientific achievements include more than 160 publications, four Best Paper Awards, three Best Paper Award nominations and a High-Impact Paper Award for one of the five most cited papers of the ICCD conference. He is member of the HIPEAC (High-Performance and Embedded Architecture and Compilation) Network of Excellence, and has been involved in several EU research initiatives (Galaxy, NaNoC, Victoria). In addition, Prof. Bertozzi was awarded by the Italian government under the program "FIRB 2008 - Future in Research" to perform roadmap studies on silicon photonics in the context of small-scale systems. "As a collaborator with IHP in European projects, I am extremely honored with this award. The work with IHP colleagues has greatly influenced my research activities.", said Prof. Bertozzi.

The International IHP "Wolfgang Mehr" Fellowship Award has been presented since 2016 and is dedicated to the former scientific director of IHP Prof. Wolfgang Mehr, who passed away in 2015. Prof. Mehr was head of the institute from 2002 to 2014 with a sustainable strategy and led it to an internationally recognized, excellent research institution. Indeed his solution-oriented determination is one of the important criteria in selecting the award winners. Last year, Prof. Niels Pohl from Ruhr University Bochum received the prize for his research in the field of millimeter wave radar and ultra-high frequency sensors. In 2016, Dr. Fabio Coccetti has been awarded for his scientific work in the field of 2D materials.