Is climate change a threat to marine ecosystems in the Benguela upwelling system? New project starts 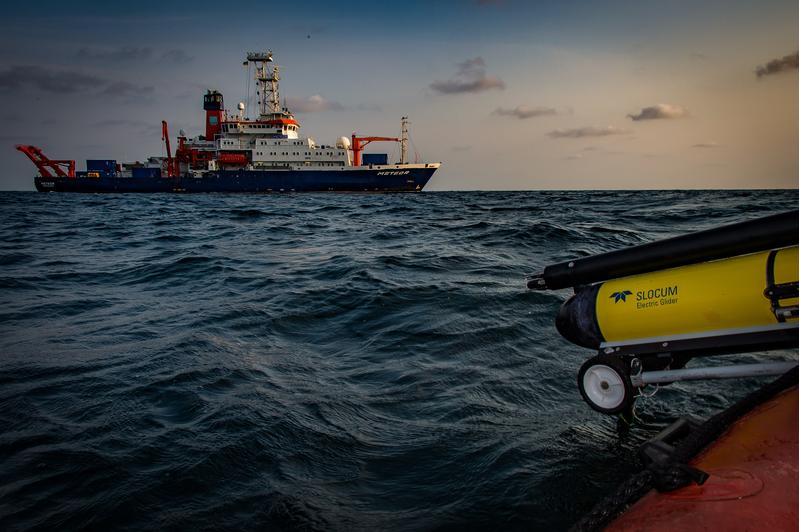 The three-year research project EVAR* to investigate possible climate change impacts on key biogeochemical processes in the Benguela upwelling system off South West Africa, a very important fishing ground, was launched on January 2, 2019. The project is funded by the German Ministry of Research with about 3 Mill. euros and is headed by the Leibniz Institute for Baltic Sea Research Warnemünde (IOW). Scientists from the MARUM – Center for Marine Environmental Sciences at Bremen University and the GEOMAR Helmholtz Centre for Ocean Research Kiel are also participating, together with their colleagues from the University of Namibia and the National Marine Information and Research Centre NatMIRC.

Eastern peripheral currents – those cold ocean currents on the eastern coasts of the world's oceans that also include the Benguela Current – are among the most productive and richest fishing areas in the world ocean. Although they occupy only 1 % of sea-covered earth surface, they account for 20 % of global fishing yields. Thus they make an indispensable contribution to the world’s food supply. These favourable conditions are caused by relatively constant ocean currents and winds in the continental shelf regions, which ensure that nutrient-rich water from deeper layers of the ocean reaches the near-surface, light-flooded zone, where it boosts the cycle of life. This phenomenon, known as “upwelling”, also has a downside: The high production of organic matter at the bottom of the shelf regions leads to oxygen deficiency combined with the release of toxic sulphur compounds. Under certain conditions, these deep water layers can reach the productive zone where they can cause devastating losses in the fishing industry. Another negative effect in upwelling areas is an increased emission of greenhouse gases such as CO2 and methane into the atmosphere.

Using the example of the Benguela upwelling region, which stretches from the Cape of Good Hope northwards almost to the equator, the EVAR* project aims at investigating how the complex interactions of deep water upwelling, geochemical processes and bacterial activity can be altered due to climate change and what kind of consequences this has for the release of climate gases, the spread of oxygen deficiency zones and environmental conditions at the seafloor. Can these changes trigger chain reactions that affect the entire system?

In order to answer these questions, the project team first wants to record, how much the intensity of the upwelling varies in time and space. To this end, high-resolution data will be collected on the current variability of the physical drivers, of the oxygen supply and of the resulting key biogeochemical responses in the carbon and nutrient cycle. Furthermore, the investigation of sediment archives that date back to the Pleistocene – i.e. around 2.5 million years – and record traces of these processes in their deposits, will provide information on fluctuations in the recent geological past. In a next step, experiments will be conducted to investigate, how fluctuations in oxygen content affect processes that are specifically driven by microbial communities. By this means, the project participants want to find out what the resulting consequences can be for biogeochemical matter cycles and how the production of greenhouse gases is affected.

The main objective of the project is to find out whether certain environmental conditions can trigger reactions that exceed critical tipping points and thus lead to irreversible negative developments in the Benguela upwelling system as a whole. In the worst case, there could be a lasting threat to fishing yields or a massive release of greenhouse gases. In order to explore such scenarios in simulations, the project will adapt an ecosystem model based on Benguela data that is specifically geared to upwelling systems.

“With EVAR*, we are pursuing an intentionally overarching, multidisciplinary approach in order to better understand the complex mechanisms and interactions within the Benguela upwelling system. This is why experts in physical and biological oceanography, marine chemistry, marine geology and modelling have come together,” says project coordinator Prof. Heide Schulz-Vogt from the IOW about the 19-member core project team. “In addition, we are very pleased that the project is supported by competent partners in Namibia and is rounded off by capacity building measures in the form of the participation of students from the University of Namibia,” concludes the geomicrobiologist.

*EVAR* = short for: “The Benguela Upwelling System under climate change – Effects of VARiability in physical forcing on carbon and oxygen budgets”)

Together with EVAR, the two partner projects REEBUS (short for “Role of Eddies in the Carbon Pump of Eastern Boundary Upwelling Systems”) and CUSCO (short for “Coastal Upwelling System in a Changing Ocean”) are launched. All three belong to the thematic research priority “Significance of climate change in coastal upwelling areas” funded by Germany’s Federal Ministry of Education and Research, which is coordinated by Prof. Dr. Ulf Riebesell and Dr. Michael Meyerhöfer (GEOMAR).

IOW is a member of the Leibniz Association with currently 93 research institutes and scientific infrastructure facilities. The focus of the Leibniz Institutes ranges from natural, engineering and environmental sciences to economic, social and space sciences as well as to the humanities. The institutes are jointly financed at the state and national levels. The Leibniz Institutes employ a total of 19.100 people, of whom 9.900 are scientists. The total budget of the institutes is 1.9 billion Euros. (www.leibniz-association.eu)