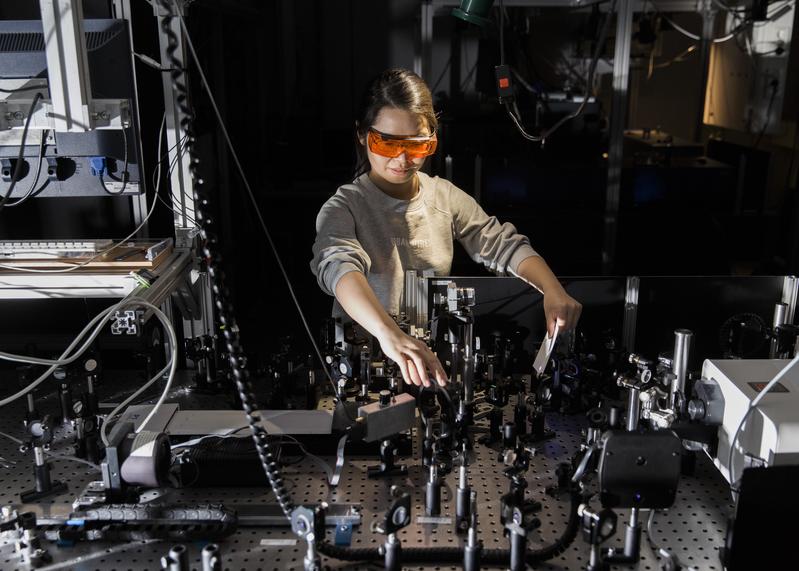 Molecular logic switches are chemical compounds that operate like electronic circuits in computers: They process information into a logical response. In a project coordinated by the Leibniz Institute of Photonic Technology (Leibniz IPHT) in Jena, an international team of scientists is investigating the fundamental properties of these molecules and whether they can be used to diagnose diseases in the future. The European Union funds the project with more than 3.5 million euros over the next four years.

In the project "Logic Lab - Molecular logic lab-on-a-vesicle for intracellular diagnostics", scientists from various disciplines are investigating how dye molecules can be combined to form new logical gates. They hope to be able to use them to detect cell dysfunctions and thus diagnose the onset of diseases such as arteriosclerosis earlier than before. From April 2019, 14 international doctoral students will be working on the topic at nine universities, research institutions and companies in Germany, Ireland, the Netherlands, Poland and Slovakia. The aim of the Innovative Training Network (ITN) is to train highly qualified young researchers through professional exchange, intensive scientific training and the acquisition of nontechnical skills.

How do molecules calculate?

Molecular logic gates are mostly organic molecules that react to physical or chemical inputs and generate an output from them - for example by fluorescing. In medical diagnostics, they could quickly and easily detect disease-typical substances or selectively destroy tumour cells with the aid of light. Such molecular gates are rare and their application in medicine has been little researched. One reason for this is that they are so far only available for a few specific inputs, e.g. for pH and the concentration of sodium ions. The questions in medical diagnostics are more complex and the known molecules are usually not suitable for use in biological samples.

"Our goal is to adapt the molecular logic gates for applications in biological environments and cells," explains Prof. Benjamin Dietzek, who coordinates the "Logic Lab" project at Leibniz IPHT. The researchers want to use liposomes - liquid filled vesicles having a lipid bilayer shell. " In the vesicles we integrate several molecular switches for different inputs. We hope to use this mini-laboratory to detect and analyze different biological signalling and messenger substances in parallel. We then want to test the system on living cells," said Dietzek. One advantage of this method is that the mini-labs can be assembled as if they were a modular system.

Better understanding of the onset of arteriosclerosis

The research team sees a medical application in the diagnosis of endothelial dysfunction. Endothelial cells, which cover the inner wall of our blood vessels, regulate blood pressure using signalling and messenger substances such as nitric oxide and calcium ions. If the balance of these substances is disturbed in the long term, a malfunction of the cells occurs, which is presumably responsible for the onset of the chronic disease arteriosclerosis. The mini-laboratory is intended to detect deviations in the concentration of substances in the cells and thus enable early diagnosis of endothelial dysfunction. This would make it possible to initiate suitable therapeutic procedures that prevent the deposition of life-threatening plaques in the blood vessels and ultimately minimise the risk of a heart attack or stroke.

In order to carry out the necessary fundamental research for this complex project, experts from the fields of spectroscopy, chemistry, microfluidics and experimental medical therapy are working closely together in the "Logic Lab" project. "To ensure that our research results can be applied in medical research in the future, we involve users and technology companies right from the start," explains Prof. Benjamin Dietzek.

The European Union is funding the "Logic Lab" project (Grant Agreement Number 813920) as part of the Horizon 2020 Marie Skłodowska-Curie Innovative Training Network for four years with a total of more than 3.5 million euros.