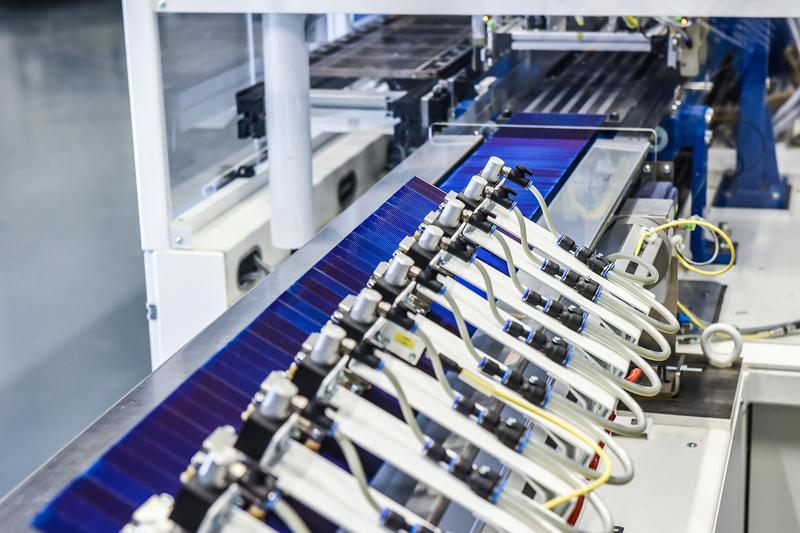 The Fraunhofer Institute for Solar Energy Systems ISE in Freiburg has developed a special adhesive process to interconnect silicon solar cells for the industrial production of shingle modules. The market demand for shingle modules is rising rapidly due to their high efficiency and pleasing aesthetics. The cell stringer at Fraunhofer ISE is unique in Germany. It offers a wide range of possibilities for the prototype production of this highly efficient module.

Due to mechanical stresses, shingle cells cannot be soldered like conventional cells. Now with the adhesive technology, it has first become possible to manufacture reliable and robust shingle cell strings. The adhesive not only balances out the thermal expansion of the glass caused by varying ambient temperatures, but also is lead-free. The cell stringer from the company teamtechnik Maschinen und Anlagen GmbH applies the electrically conductive adhesive, or ECA, using a screen-printing technique and connects the cells with a high precision. Achim Kraft, head of team Interconnection Technologies at Fraunhofer ISE is positive: “The aesthetics and the high power density will push the shingle technology forward, especially in the automotive industry and for building-integrated applications. European module manufacturers inquire increasingly about application-oriented developments and technology assessments for shingle solar cells.”

The shingle technology was developed in the 1960s. First with the drastic fall in silicon solar cell costs and the successful realization of conductive glues, however, was the market readiness of the technology reached. Through shingling, the gaps between the cells disappear, maximizing the possible module area used for electricity production and giving the module a homogeneous, aesthetic appearance. The higher efficiency of shingle, as compared to conventional, modules is due, for one, to the larger active area of the module and secondly since the shadow losses caused by conventional surface-mounted cell interconnectors are avoided. The resistance losses are also less because of the lower current densities in the cell stripes. The Cell-to-Module (CTM) losses and gains can be analyzed in detail with SmartCalc.CTM, a software package developed at Fraunhofer ISE. Final results show that the shingle modules have module efficiencies that are approximately 2 percent (absolute) higher than conventional modules with the same cell efficiency. These results were confirmed by power measurements at the calibration laboratory CalLab PV Modules of Fraunhofer ISE.

With the small cell stripes, different module formats can be realized, creating a large variety of options for specific applications. Currently the experts at Fraunhofer ISE are working on optimizing the amount of adhesive used, the cell design as well as looking into new areas of application.

The development work was carried out within the PV-BAT400 project, which was financially sponsored through the German Federal Ministry for Economic Affairs and Energy (FKZ 0321125).