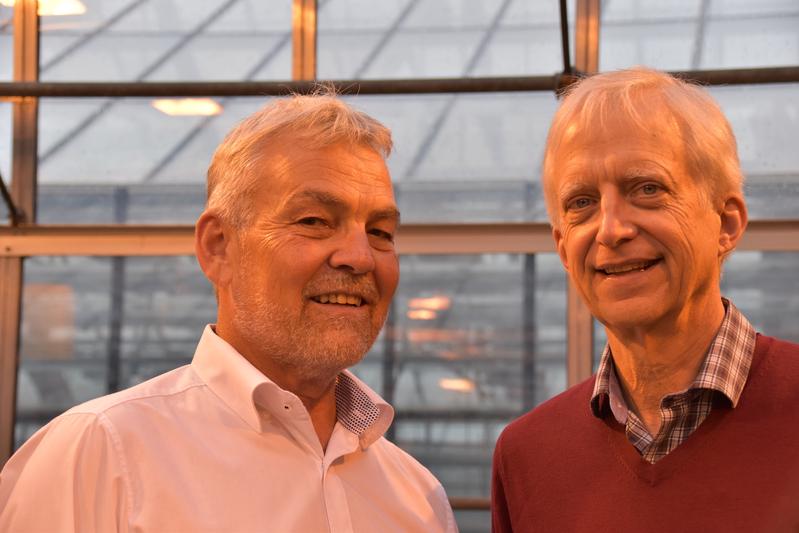 Millions of people, including many children, die every year as a result of crop failures worldwide, especially in the ‘third world countries’ of Africa. In many cases, crop failures are are caused by infefctions with plant viruses.

The Department of Plant Viruses of the Leibniz Institute DSMZ-German Collection of Microorganisms and Cell Cultures has now succeeded in finding varieties of an important food plant, cassava, that are resistant to pathogenic viruses. Cultivation of these plants in Africa can prevent crop failures and part of the hunger problem can be solved.

Since 2014 the cassava research of the Department of Plant Viruses of the Leibniz Institute DSMZ-German Collection of Microorganisms and Cell Cultures GmbH in Brunswick has been funded by the Bill & Melinda Gates Foundation. In December 2018 the Senior Program Officer of the Foundation, Dr. Jim Lorenzen, visited the DSMZ plant virus research group, led by Dr. Stephan Winter, in Brunswick (Germany). As part of a project funded by the Gates Foundation with about 900,000 Euro, the researchers succeeded in finding resistances to African viruses in cassava varieties from South America. The viruses trigger a severe root rot, the Cassava Brown Streak Disease (CBSD), which leads to complete crop loss. So far, African cassava varieties have little resistance to these viruses, often leading to catastrophic crop failures. "As the disease continues to spread from East Africa to Central and West Africa and threatens the growing in these regions, there is an urgent need to take countermeasures," explains Doctor Winter. After extensive trials in the Brunswick research greenhouses, the resistant cassava plants from South America were sent to research stations in Kenya, Tanzania, Rwanda, Uganda and Nigeria to cross virus resistance in African varieties. Experiments in South Kivu in Eastern Congo, which were evaluated after one year of field cultivation, proved that virus resistance in South American varieties is maintained in the field.

South American cassava plants as a solution for Africa
"The selected variants grow in Africa, retain their viral resistance to CBSD and remain healthy," says Dr. Stephan Winter, the world's leading cassava virus researcher. In Brunswick, Dr. Jim Lorenzen and Dr. Stephan Winter discussed other research projects that, in addition to basic research on the resistance characterization of South American breeding lines, would primarily involve them directly in the breeding work of African partners. This would to make the new research results concretely applicable in Africa in the fight against hunger. "After twelve months of field cultivation, the South American cassava seedlings show excellent resistance characteristics. However, there is still a need for research when it comes to establishing the plants in different growing regions, but the first steps towards resistant cassava plants in Africa have been taken," Dr. Winter summarises the current situation.

Cassava as a food plant
Cassava, also known as manioc, is mainly known in this country as tapioca, the starch extracted from the manioc root. It is the most important food plant in sub-Saharan Africa and often the only daily meal for the poor. Cassava cultivation is repeatedly threatened by viral diseases. For some years now, a viral disease has been spreading from the coastal regions of East Africa. It is caused by novel Cassava Brown Streak viruses and destroys the root. The plants perish, the tuber harvest fails and threatening bottlenecks in food supplies repeatedly occur in African countries, especially in Uganda and Tanzania. The further spread of the disease, especially westward, represents an enormous threat potential for the people of countries such as the Democratic Republic of the Congo and Nigeria, where cassava is of outstanding importance in agricultural production and nutrition.

Since Dr. Winter became head of the DSMZ Department of Plant Viruses in 1995, viruses of tropical and subtropical plants have been an important field of research in Brunswick. The research team of the Leibniz Institute DSMZ-German Collection of Microorganisms and Cell Cultures GmbH aims at the rapid detection of viral diseases in plants in order to effectively combat epidemics and to explore ways of effectively controlling viral diseases.

About the Leibniz Institute DSMZ
The Leibniz Institute DSMZ-German Collection of Microorganisms and Cell Cultures is the world's most diverse collection of biological resources (bacteria, archaea, protists, yeasts, fungi, bacteriophages, plant viruses, genomic bacterial DNA as well as human and animal cell lines). Microorganisms and cell cultures are collected, investigated and archived at the DSMZ. As an institution of the Leibniz Association, the DSMZ with its extensive scientific services and biological resources has been a global partner for research, science and industry since 1969. The DSMZ is the first registered collection in Europe (Regulation (EU) No. 511/2014) and certified according to the quality standard ISO 9001:2015. As a patent depository, it offers the only possibility in Germany to deposit biological material in accordance with the requirements of the Budapest Treaty. In addition to scientific services, research is the second pillar of the DSMZ. The institute, located on the Science Campus Braunschweig-Süd, accommodates more than 66,500 cultures and biomaterials and has 198 employees. www.dsmz.de

The Leibniz Association
The Leibniz Association connects 95 independent research institutions that range in focus from the natural, engineering and environmental sciences via economics, spatial and social sciences to the humanities. Leibniz Institutes address issues of social, economic and ecological relevance. They conduct knowledge-driven and applied basic research, maintain scientific infrastructure and provide research-based services. The Leibniz Association identifies focus areas for knowledge transfer to policy-makers, academia, business and the public. Leibniz institutions collaborate intensively with universities – in the form of “Leibniz ScienceCampi” (thematic partnerships between university and non-university research institutes), for example – as well as with industry and other partners at home and abroad. They are subject to an independent evaluation procedure that is unparalleled in its transparency. Due to the importance of the institutions for the country as a whole, they are funded jointly by the Federation and the Länder, employing some 19,100 individuals, including 9,900 researchers. The entire budget of all the institutes is approximately 1.9 billion Euros.