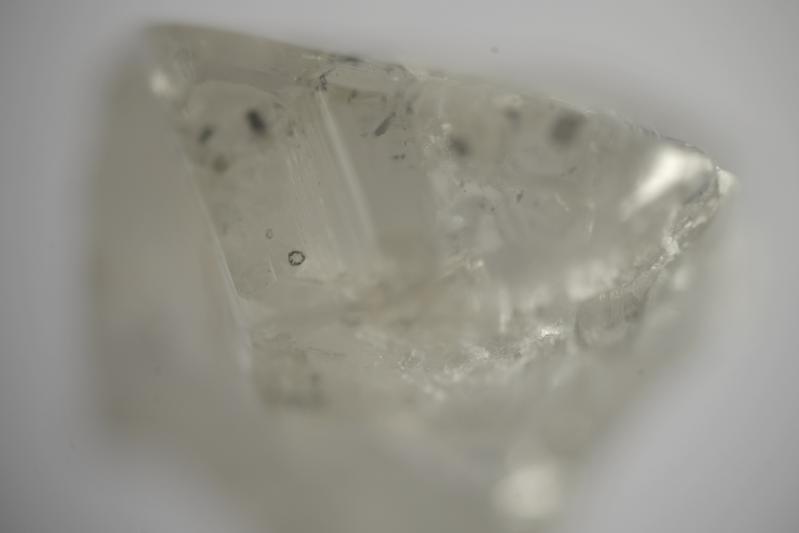 Diamonds are messengers from Earth’s interior. A portion of the rare gem, which is very small but important for researchers, contains inclusions from the earth’s lower mantle. One of the most common minerals brought to the Earth’s surface in this way has now been named “breyite” by the Commission of the “International Mineralogical Association” in honour of the mineralogist Professor Gerhard Brey from Goethe University.

The interior of the Earth is largely inaccessible for sample recovery. Intensive drilling efforts can reach a maximum depth of 12 kilometres, which represents a mere scratching on the surface. Volcanoes, on the other hand, can transport samples from significantly deeper zones to the Earth’s surface. The samples that come from the greatest depths are inclusions of minerals and rock fragments in valuable diamonds. These inclusions were one of the fields of research of Gerhard Brey, meanwhile retired Professor for Petrology and Geochemistry at the Institute for Geosciences at Goethe University.

According to prevalent theories, Earth’s lower mantle (at a depth of 660 – 2900 kilometres) consists almost exclusively of the three minerals silicate perovskite, ferropericlase, and a mineral rich in calcium and silicon with a perovskite structure. When diamonds form at this depth, it can happen that they trap this mineral. During transport to the earth’s surface, the calcium-silicon perovskite converts to a new crystal structure that is stable at lower pressure. This mineral is only known as inclusion in diamonds. It now bears the name breyite.

“Having a mineral named after you is a very special honour and pays tribute to the life work of a scientist in a special and lasting way,” states Brey’s colleague, the geoscientist Professor Frank Brenker. “Especially when we’re talking about such an important Earth mineral. Gerhard Brey’s name is now forever carved in stone, so to speak.”

Gerhard Brey, who retired in 2014, is considered a pioneer in experimental petrology under high-pressure conditions. He achieved world recognition through the development and calibration of geothermobarometers for rocks in the earth’s mantle. These thermobarometers are not only crucial aids in researching the Earth’s interior, they are also very popular in the search for new diamond deposits. While it used to be necessary to process tons of rocks to determine whether the deposit in question really contained diamonds, now only a few grains of mineral are necessary.

In addition to thermobarometric calculations, Brey is interested in the solubility of fluids and gases, including their influence on the formation of magmas. Along with other colleagues, he was one of the first researchers to recognize the scientific value of inclusions in diamonds with origin depths of hundreds of kilometres.

Brey has received a numerous distinctions, including an honorary doctorate from the Russian Academy of Sciences and the Abraham-Gottlob-Werner silver medal, which he was awarded by the German Mineralogical Society for his life’s work.

A picture may be downloaded at: http://www.uni-frankfurt.de/75659882
Caption: Breyite inclusion in a Brazilian diamond with “super-deep“ origins.
Credit: Brenker, Goethe University
Portraits of Gerhard Brey: private

Goethe University is a research-oriented university in the European financial centre Frankfurt The university was founded in 1914 through private funding, primarily from Jewish sponsors, and has since produced pioneering achievements in the areas of social sciences, sociology and economics, medicine, quantum physics, brain research, and labour law. It gained a unique level of autonomy on 1 January 2008 by returning to its historic roots as a "foundation university". Today, it is among the top ten in external funding and among the top three largest universities in Germany, with three clusters of excellence in medicine, life sciences and the humanities. Together with the Technical University of Darmstadt and the University of Mainz, it acts as a partner of the inter-state strategic Rhine-Main University Alliance. Internet: www.uni-frankfurt.de