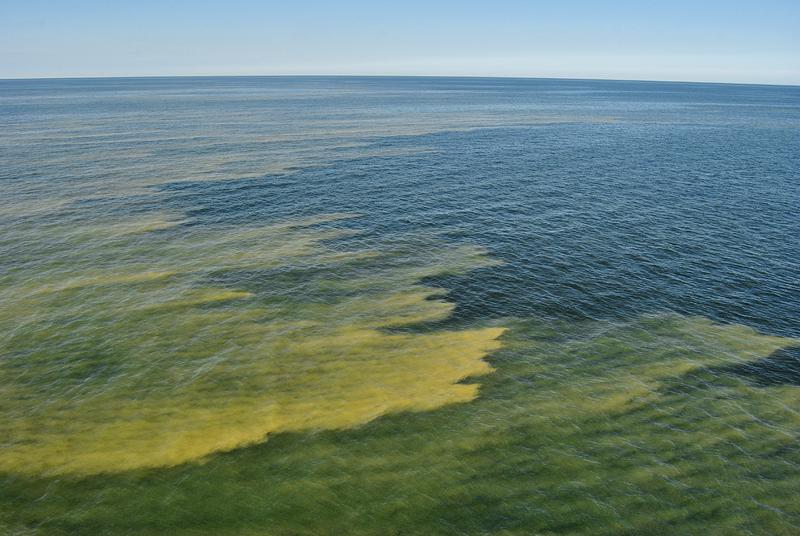 Marine researchers from Warnemünde have succeeded in deciphering the mysterious feeding behaviour of mesozooplankton in the presence of blue-green algae blooms, by analysing stable nitrogen isotopes in amino acids. They found out that contradictory observations, according to which both the dominance of herbivorous and carnivorous diets occurred, can be explained by the aging process of a bloom. Apparently, the stage of a bloom determines whether "meat" or "vegetables" are preferred. In view of an assumed future worldwide increase in such blooms, their findings open up new perspectives on potential developments within a key group of the marine food web.

It forms one of the most important pillars of the marine food web worldwide: the so-called mesozooplankton comprises animals between 0.2 and 20 mm in size floating in the water. Their diet is varied. There are carnivorous animals as well as "vegetarians" which make use of the phytoplankton directly. Organic material formed by algae and bacteria during primary production is processed by them either directly or via several steps for further use in the complex food web of the oceans. Their diet determines whether energy-rich food is available for higher trophic levels - such as fish - or rather narrow food, because at each intermediate stage on the way from phytoplankton to mesozooplankton energy is lost, larger amounts have to be consumed in order to absorb the same nutritional value. Mesozooplankton thus occupies a key ecological position and the question of whether carnivore or herbivore nutrition prevails at this level can be decisive for the entire food web in the ocean.

However, investigating the exact relationship between carnivores and vegetarians in mesozooplankton has so far only been possible in complex experiments under laboratory or mesocosm conditions. Natalie Loick-Wilde and her colleagues have now succeeded in entering the real environment with a new approach: using the analysis of stable nitrogen isotopes in amino acids, she was able to directly determine the ratio of carnivores to herbivores on zooplankton samples from different locations in the Baltic Sea and relate these values to the environmental conditions measured on site.

This approach enables the direct investigation of a wide range of possible influences on the diet and thus the complexity of the food web and the energy content of mesozooplankton. In a recent article published in the international journal "Global Change Biology", the interdisciplinary team of authors consisting of biologists, chemists and physicists describes how these food relationships in mesozooplankton develop under the influence of cyanobacterial blooms, commonly known as blue-green algae blooms.

Large, filamentous, nitrogen-fixing cyanobacteria, such as Nodularia or Trichodesmium, are regarded as profiteers of the increasingly rapid warming of the oceans. Their influence on mesozooplankton will therefore increase in the future. "The cyanobacteria we are talking about here are relatively large and often produce toxins. They are rather unattractive for zooplankton as food," explains Natalie Loick-Wilde, who heads the working group "Aquatic food webs" at the Leibniz Institute for Baltic Sea Research in Warnemünde (IOW). "How such a rather bad food supply affects feeding behaviour in mesozooplankton has so far been unclear. Different studies led to contradictory results: sometimes the dominance of carnivorous, sometimes herbivorous diet was observed.

Using her new approach, Natalie Loick-Wilde and her interdisciplinary team of authors have now been able to show that the shift towards carnivorous dominance runs parallel to the ageing process of the blooms. The planktonic community became more diverse. In addition to autotrophic primary producers, who only need light and nutrients for their reproduction, heterotrophic microorganisms, which already feed on algae and bacteria, played a major role in the food spectrum of mesozooplankton, which thus became carnivorous instead of herbivorous. The consequences of this for the biogeochemical functions of mesozooplankton and thus also for the higher trophic levels and whether the mechanism can also be transferred to the large, seasonal Trichodesmium blooms of the tropical and subtropical oceans are the subject of further research. For Loick-Wilde, however, it is also the biogeochemical models that can benefit from her research: "While the feeding behaviour of mesozooplankton in the models has always been either herbivor or carnivor before, we can now also incorporate the changes that occur under changing environmental conditions. This is a big step towards understanding the dynamics of the food web".