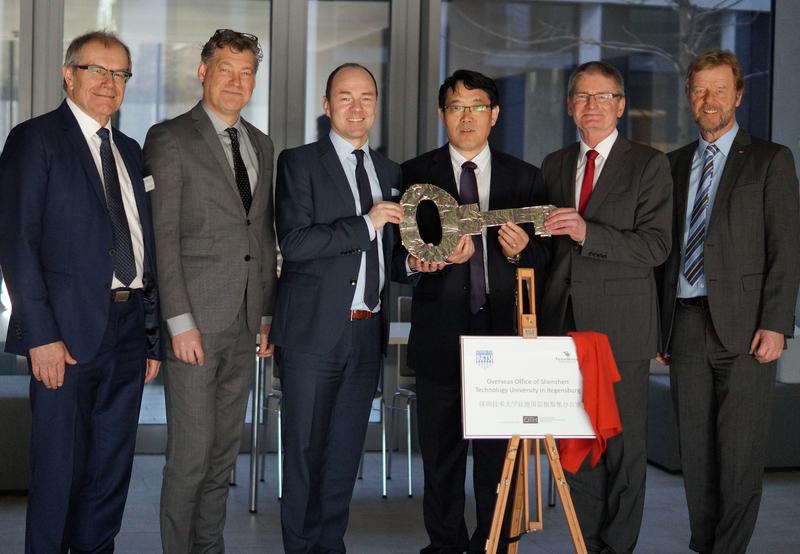 At the 16 January 2019, Shenzhen Technology University (SZTU) – founded well over a year ago – held a modest ceremony to celebrate the opening of its first international office in the TechBase Regensburg. The office will act as a liaison point between Shenzhen, the metropolis with a population of 13 million in the south of China, and Regensburg; it will further bolster cooperation between the two cities, and especially between OTH Regensburg and the SZTU, and place it on a sustainable footing. The background to this is that in China's own silicon valley of Shenzhen, the SZTU will develop into a higher education institution along the lines of a German university of applied sciences (UAS). OTH Regensburg and four other Bavarian UAS’s will serve as a role model for this project; initial joint ventures such as the setup of a brewing laboratory at the SZTU with the support of Dipl.-Ing. (FH) Siegfried Schrammel from OTH Regensburg have already been successful.

At the opening ceremony the tape stretched across in front of the office on the second floor of the TechBase was cut jointly by SZTU President Prof. Shuangchen Ruan, Prof. Dr. Wolfgang Baier, President of OTH Regensburg, Alexander Rupprecht, Director of TechBase, and Toni Lautenschläger and Dieter Daminger representing the city of Regensburg. “I’m very happy to see our two universities already working together so closely and actively, and I am certain that the opening of this office will lead the way to many more interesting and worthwhile ventures together,” said Prof. Dr. Wolfgang Baier. Alexander Rupprecht, Director of TechBase, is equally enthusiastic about the increased collaboration on the new site. “In terms of business start-up support in particular, our partners regard the model in Regensburg as one worth emulating. They too want to network the startup ecosystem more strongly in their region and simplify internationalisation.” Prof. Dr. Holger Haldenwang of OTH Regensburg and Prof. Dr. Qitao Lue of HAN’s Laser also spoke at the opening ceremony.

Shenzhen is one of China’s most important business cities, being home to companies such as HuaWei, BYD, HAN’s Laser or WeChat app provider Tencent. The newly established SZTU has an international outlook and intends to use the office at TechBase as a hub and information point to draw attention to itself and intensify the two-way interchange between students and teaching staff. There are also plans to initiate joint research projects. Attracting large, well-known businesses as well as start-ups for joint ventures with the SZTU is another ambition.