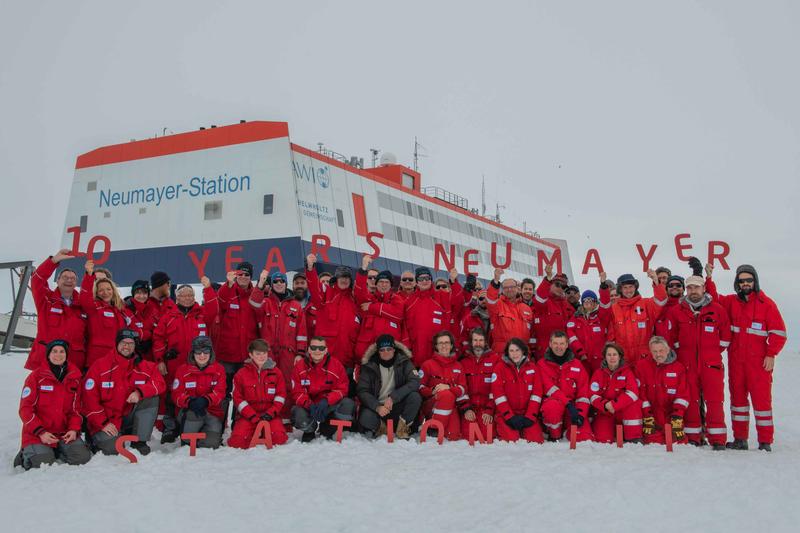 Joint Press Release from the BMBF and AWI

The Antarctic is a frigid continent south of the Antarctic Circle, where researchers are the only inhabitants. Despite the hostile conditions, here the Alfred Wegener Institute, Helmholtz Centre for Polar and Marine Research (AWI) operates a research station where researchers live and work year round. Since 2009 the Neumayer Station III, located on the Ekström Ice Shelf on the eastern coast of the Weddell Sea, has served as the primary base of operations for German Antarctic research activities. The station crew, together with a delegation from the research and political communities, are now celebrating its ten-year anniversary.

Extreme cold, raging storms, and the seemingly never-ending Polar Night: the Antarctic is one of the most fascinating habitats on our planet. At the same time, it has a major influence on our climate. For the past ten years, the Neumayer Station III has provided vital support for German and international research projects in the Antarctic. Just a few kilometres from its two predecessors, the station was erected in the course of two consecutive Antarctic summers, and completed in early 2009. In a region that is sparsely populated, even by Antarctic standards, the station’s observatories are continuing unique time series that date as far back as the 1980s. At the same time, new research questions to investigate crop up year after year. In this regard, the station offers an essential ‘base camp’ for expeditions to the Antarctic hinterland, where e.g. the AWI’s snowcats and polar research aircraft come into play.

“The Antarctic continent is home to the Earth’s largest ice masses, and the Antarctic Ocean absorbs tremendous amounts of CO2 and heat, which is why conducting research in this region is of fundamental importance. In order to better grasp global changes, at the Neumayer Station III we gather data over extended timeframes – from minute-to-minute weather observations to exploring the planet’s climatic history on the basis of ice cores. In addition, we provide support for observations of Antarctica’s diversity, from penguin colonies to the cold-water corals below the massive ice shelves,” explains AWI Director Antje Boetius.

For example, at the station’s meteorology observatory, radiosondes attached to weather balloons are launched on a regular basis to measure the temperature, humidity, barometric pressure, wind and the distribution of ozone in the atmosphere. Further focus areas include research on atmospheric chemistry, the Earth’s magnetic field, sea ice, and a colony of emperor penguins. Since 2017, under the auspices of the German Aerospace Center (DLR), the EDEN-ISS greenhouse has been tested at the Neumayer Station III. The goal: to pave the way for cultivating crops in space and in regions with challenging climatic conditions. As a result, this year’s overwintering team was the first that could look forward to fresh lettuce on a regular basis. In addition, here Germany’s Federal Institute for Geosciences and Natural Resources (BGR) operates one of 60 infrasound stations deployed around the globe, which serve to monitor adherence to the Comprehensive Nuclear-Test-Ban Treaty (CTBT). The German Meteorological Service (DWD) is also represented at the station, and provides essential forecasts that help ensure researchers know when it is safe to work outside. In the region of the Antarctic known as Dronning Maud Land, the DWD also supports international partners from e.g. Russia, Norway and South Africa by providing aviation weather forecasts.

Currently, a fourteen-person delegation led by the Parliamentary State Secretary at Germany’s Federal Ministry of Education and Research (BMBF), Dr Michael Meister, is taking an inspection tour of the Neumayer Station III.

“These past few days have given us the chance to see for ourselves just how necessary and relevant polar research is for everyone. We need in-depth information on polar processes in order to understand the global climate and its on-going changes, and in order to devise policy recommendations on that basis. This scientific information is an essential prerequisite for making sustainable political decisions. I’d like to thank all of the experts among the research, technical and logistics staff for the valuable work they do under these harsh conditions,” stresses Parliamentary State Secretary Meister.

“With its interdisciplinary centres and its impressive research infrastructures, Helmholtz is making an important contribution to addressing the great challenges of our time,” says Otmar D. Wiestler, President of the Helmholtz Association. “The long-term research being conducted at the Neumayer Station III in the Antarctic is a prime example. Various scientific disciplines profit from the station’s unparalleled resources, including meteorological and climate research, space research, biology, geology and many more. Ultimately, all of these fields help to preserve or enhance our natural resources. I’m grateful to have now had the opportunity to experience the work being done at this extraordinary research station first-hand.”

For more than three-and-a-half decades, the AWI has maintained a research station staffed year-round in the Antarctic. Named in honour of the German polar researcher Georg von Neumayer, the Georg-von-Neumayer Station commenced operations in 1981. In 1992 it was replaced by the Neumayer Station, which, like its predecessor, was essentially a tubular structure. The current Neumayer Station III represents the largest and most comfortable station in the history of German Antarctic research. During the summer months, it offers accommodation for 50; as a rule, the overwintering team only consists of nine people. Unlike the majority of research stations in the Antarctic, virtually all workspaces, common rooms and supply rooms are centrally located under the same roof. In addition, both the station’s design and operation reflect the highest environmental protection standards. The energy it produces is recirculated in a closed system to the maximum extent possible, ensuring its optimal utilisation. Moreover, at the end of its service life, the entire station can be dismantled down to the last screw, so that the tracks left behind in this invaluable region are kept to a minimum.

That being said, its geographic position alone subjects the station to harsh conditions: every day, the ice shelf creeps roughly 40 centimetres toward the coast, which means there is a natural “expiry date” for the station. In addition, the very ground the station was built upon will one day calve as an iceberg – though, if the ice continues to flow at its current speed, that won’t happen for at least another 100 years. Buildings in the Antarctic also have to withstand virtually never-ending snowfall. In this regard, the Neumayer Station III is optimally adapted to its environment. Unlike its two predecessors, there’s no risk of it eventually being crushed by accumulating snow, since the entire station stands on 16 hydraulic struts, which technicians adjust at regular intervals to keep the building out of the snow. This allows it to rise in keeping with the snow cover, ensuring the platform remains at a constant height of ca. six metres above the surface. Thanks to this system, the station is bound to enjoy a far longer service life than the two stations before it – tentatively, at least until 2035.

Printable images and a video are available in the online version of this Press Release: https://www.awi.de/en/about-us/service/press.html