Opioids: no effect without side effect 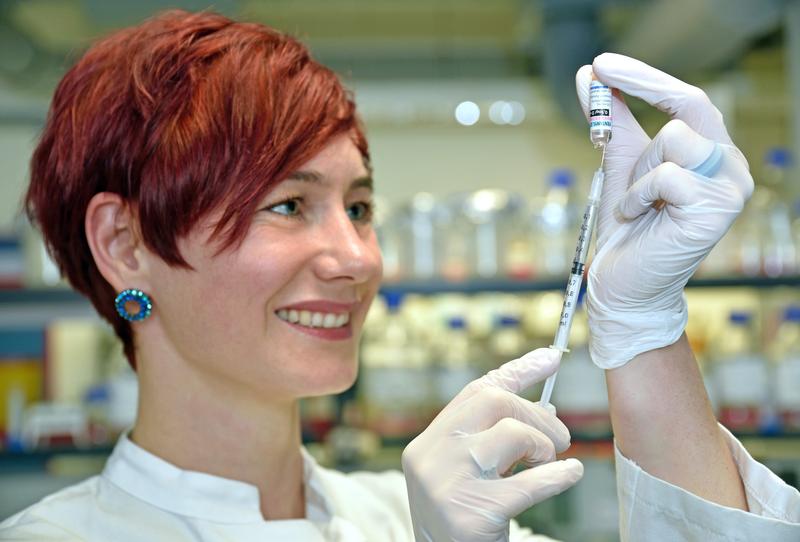 Through genetic changes to the opioid receptor in mice, pharmacologists at Jena University Hospital have succeeded in almost completely suppressing the development of opioid tolerance. The pain-relieving effect actually improved and continued even when the drug was administered for longer periods. However, adverse effects such as respiratory depression and constipation, as well as withdrawal symptoms, were unchanged. The study, now published in Nature Communications, suggests that the development of opioid tolerance is mediated by phosphorylation and desensitisation of the opioid receptor. These findings can be used in developing improved opioids.

More than two-thirds of the over 70,000 drug-related deaths in the USA in 2017 were due to opioid overdoses. The rapidly increasing abuse of the strong painkillers over the past 20 years is even referred to as the opioid crisis and it led US President Donald Trump to declare a state of emergency in public health care in 2017. In almost all cases, the opioid victims died as a result of respiratory paralysis.

Shallower breathing and a tendency to constipation are frequent side effects of the highly effective drugs, which are used for the treatment of severe pain, for example after operations or in the case of cancer. In addition, there is a great potential for addiction, which was shamefully underestimated, especially in the case of synthetic opioids that were launched on the market a good 20 years ago. The risk of side effects is further increased by a habituation effect that occurs with repeated administration of opioids: ever higher doses must be given to achieve the same pain relief. While this tolerance development reduces the pain-relieving effect, the side effects remain almost the same. Researchers and pharmaceutical companies are working relentlessly to find new substances that activate the opioid receptor and effectively relieve pain even after prolonged administration, but do not cause any dangerous side effects.

However, the molecular regulation mechanisms of opioid receptors, which are the specific docking sites for opioids on the surface of nerve cells, are far from being understood in detail. “In principle, we differentiate between two major signalling pathways at the opioid receptor: G proteins mediate the pain-relieving effect, while the binding of phosphate groups and the scaffold protein arrestin to the receptor mediates the desensitisation effect,” explains Professor Stefan Schulz of Jena University Hospital. In its search for the mechanism that gradually weakens the effect of the fundamentally effective painkiller, the group led by Stefan Schulz has long had its sights on the desensitisation of receptors, a kind of protective mechanism of the cell against over-stimulation, which makes it less sensitive to excessive stimulation.

As part of Transregio ‘ReceptorLight’, funded by the German Research Foundation (DFG), the Jena scientists, together with colleagues from Sydney, London und Gainesville, Florida, have now been able to confirm their assumption in a study using genetically modified mice. They altered the receptor in the animals in such a way that it no longer had binding sites for the phosphate groups. Desensitisation could no longer take place at the altered receptors and the receptors were no longer degraded in the nerve cell but remained in the cell membrane.

The researchers then tested the effect of the natural agent morphine and the highly effective synthetic substance fentanyl on the genetically modified mice. “Compared to wild type mice, a single administration of a much lower dose was sufficient to achieve the same pain relief – almost 60 per cent for fentanyl and less than half for morphine. This effect also lasted longer,” says the lead author of the study, Dr Andrea Kliewer.

To test the habituation effect, the animals were given the painkiller continuously for seven days. Compared with the first day, a fentanyl dose thirteen times higher than the initial dose was necessary to achieve the same pain-relieving effect in the wild type animals. For the other mice, significantly less than double the initial dose was sufficient. Andrea Kliewer: “The animals with opioid receptors without phosphorylation sites developed virtually no habituation to the active substances. This confirms our assumption that tolerance and desensitisation occur via the same molecular mechanisms.”

The researchers carefully examined the test animals for side effects such as respiratory depression and constipation, as well as dependence and withdrawal symptoms. To this end, they recorded lung function and the faeces amounts; in behavioural tests, they observed the animals for signs of addiction and administered the opioid antagonist naloxone to simulate withdrawal. The surprising result: all the adverse effects were still present and respiratory depression was even more pronounced in the genetically modified animals than in the wild type mice. It was shown that when the opioid dose is varied, pain reduction and side effects change to the same extent in all animals. “Our results clearly indicate that the arrestin signalling pathway of the opioid receptor only regulates desensitisation and tolerance development, but that the side effects and dependency, as well as the desired analgesia, are mediated by the G proteins. This has great significance for the further development of opioid-based painkillers,” notes Stefan Schulz.