A Boost for Photosynthesis 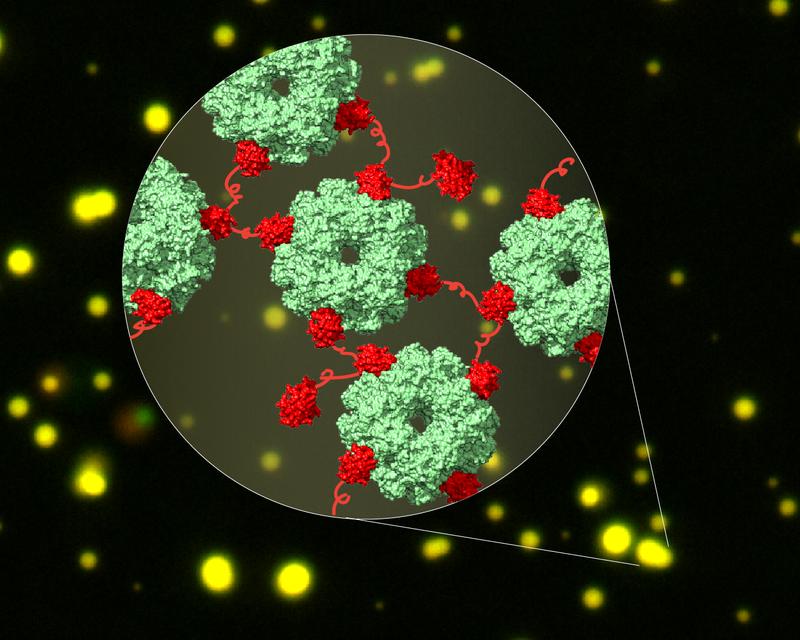 Photosynthesis is a fundamental biological process which allows plants to use light energy for their growth. Most life forms on Earth are directly or indirectly dependent on photosynthesis. Researchers at the Max Planck Institute of Biochemistry in Germany have collaborated with colleagues from the Australian National University to study the formation of carboxysomes – a structure that increases the efficiency of photosynthesis in aquatic bacteria. Their results, which were now published in Nature, could lead to the engineering of plants with more efficient photosynthesis and thus higher crop yields.

With the global population increasing by an estimated 80 million people each year, the demand for food is steadily on the rise. To meet this demand, scientists are working on strategies to improve the productivity of crops.

Photosynthesis – essential but inefficient
While most organisms have to take up nutrients to generate energy for their cells, plants and some microbes can fuel their cells with light energy. In a process called photosynthesis, they convert water and carbon dioxide (CO2) to sugar and oxygen with the help of sunlight. The critical enzyme of this reaction is Rubisco, which catalyzes the fixation of CO2 from the atmosphere. However, Rubisco, which is estimated to be the most abundant enzyme on Earth, works slowly and inefficiently. Instead of binding CO2, Rubisco can also react with oxygen. A lot of energy is lost in this side reaction. Therefore, scientists are trying to engineer a more efficient version of Rubisco to improve plant growth. A team led by Manajit Hayer-Hartl, head of the research group “Chaperonin-assisted protein folding” at the Max Planck Institute of Biochemistry in Martinsried, has now made an important contribution to these efforts.

Cyanobacteria are aquatic microbes that perform photosynthesis. They have evolved a strategy to increase the efficiency of their Rubisco enzyme. Cyanobacteria locally increase the concentration of CO2 in specialized structures called carboxysomes and confine their Rubisco to these structures. In this way, cyanobacteria reduce the energy that is lost in the side reaction with oxygen. The new study has now demonstrated how the formation of carboxysomes is initiated.

Trapping Rubisco for extra energy
Cyanobacteria use a helper protein called CcmM to capture Rubisco. CcmM is built of several repeat modules that resemble the small subunit of Rubisco – therefore it was long assumed that these modules replace the small subunits of Rubisco when the proteins interact, thereby linking Rubisco proteins. However, the complex between CcmM and Rubisco is highly dynamic and therefore could not be solved by traditional structural biology methods. “In this study, we took advantage of the rapidly developing method of cryo-electron microscopy to capture these dynamic interactions”, says Huping Wang, shared first author of the study. Using cryo-EM, the researchers showed that CcmM does not replace the small subunit of Rubisco but rather links Rubisco proteins together by an unexpected mechanism.

The interaction between CcmM and Rubisco causes de-mixing of the protein complex from other proteins in the cell. “This de-mixing of proteins is called phase separation, a process that concentrates proteins locally. In cyanobacteria, the protein shell of the carboxysome is then formed around the phase separated CcmM and Rubisco to capture them“, explains Xiao Yan, shared first author of the study. A similar process of phase separation also plays a role in neurodegenerative diseases such as Amyotrophic Lateral Sclerosis.

The formation of carboxysomes boosts photosynthesis because these microcompartments concentrate CO2 in the vicinity of Rubisco, making the enzyme more efficient. The current results greatly improve the understanding how these CO2-concentrating structures are formed. Manajit Hayer-Hartl describes a potential application of the results of the study: “If we could transfer functioning carboxysomes into higher plants, this would give crops an extra boost by allowing them to fix CO2 more efficiently. The energy, which is usually lost in the reaction of Rubisco with oxygen, would go towards the production of biomass “. In the long-term, the insights from Hayer-Hartl’s research could contribute to the generation of more efficient crops, reduce the demand for fertilizers and improve the global food supply. [CW]

---
About Manajit Hayer-Hartl
Manajit Hayer-Hartl received her Bachelor of Science degree at the University of Stirling, Scotland, UK, where she afterwards gained her PhD. Her interest in structural and cellular biology motivated her to several postdoctoral fellowships at renowned research institutions, among them the Louis Pasteur Institute in Strasbourg, France and the Sloan-Kettering Institute in New York, USA. Hayer-Hartl joined the Max Planck Institute of Biochemistry in 1997 as group leader in the department “Cellular Biochemistry”. Since 2006, she is head of the research group “Chaperonin-assisted Protein Folding”. Her research focuses on chaperones and how these molecular machines assist in proper protein folding and assembly. Hayer-Hartl is an elected member of the European Molecular Biology Organization (EMBO) and of the German National Academy of Sciences (Leopoldina). For her research, she has received the Dorothy Crowfoot Hodgkin Award and the Charles F. Kettering Award.

About the Max Planck Institute of Biochemistry
The Max Planck Institute of Biochemistry (MPIB) belongs to the Max Planck Society, an independent, non-profit research organization dedicated to top level basic research. As one of the largest Institutes of the Max Planck Society, 850 employees from 45 nations work here in the field of life sciences. In currently eight departments and about 25 research groups, the scientists contribute to the newest findings in the areas of biochemistry, cell biology, structural biology, biophysics and molecular science. The MPIB in Munich-Martinsried is part of the local life science campus where two Max Planck Institutes, a Helmholtz Center, the Gene-Center, several bio-medical faculties of two Munich universities and several biotech-companies are located in close proximity. http://www.biochem.mpg.de