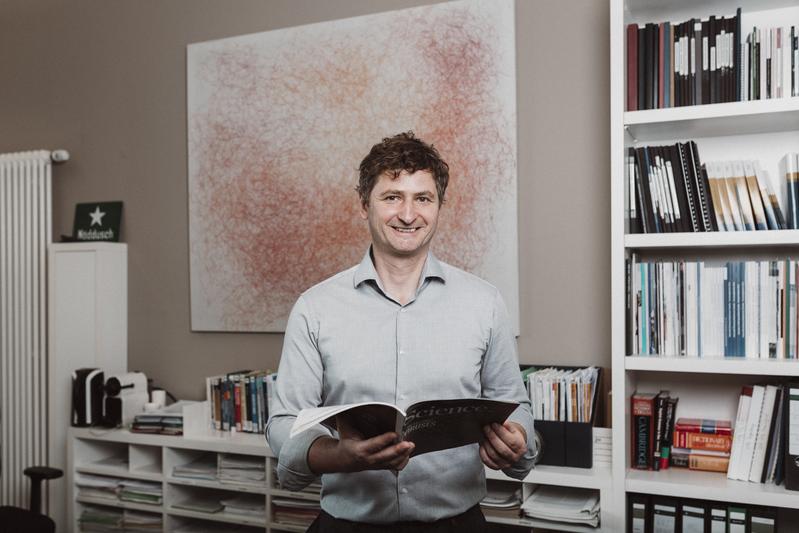 HIRI director is honoured for German-British exchange in science

The Feldberg Prize for German-British Exchange in the Life Sciences 2019 goes to Prof. Jörg Vogel from Würzburg. As the foundation recently announced, Vogel on the German side and Prof. Anne Ferguson-Smith of Cambridge on the British side are this year's Feldberg Foundation laureates. The foundation’s mission is to promote scientific exchange between German and British researchers in order to foster fruitful cooperation across national borders.

The RNA researcher and microbiologist Jörg Vogel is the founding director of the new Helmholtz Institute for RNA-based Infection Research (HIRI), the Würzburg site of the Helmholtz Centre for Infection Research. He also directs the Institute of Molecular Infection Biology (IMIB) at the Julius-Maximilians-Universität Würzburg and he is an honorary professor at Imperial College London. Vogel got interested in noncoding RNA molecules during his studies in Germany and Great Britain. After graduating from Humboldt-Universität Berlin, he did postdoctoral research in Sweden and Israel. International cooperation has always been essential to him.

"I'm very honoured by this award," says Vogel. "Science, no matter the field, thrives on multinational cooperation. Exchange with researchers from other countries such as the UK is vital to success in the life sciences and helps us to change people's lives for the better."

This year's award is particularly timely against the backdrop of current widespread nationalism. The upcoming Brexit threatens cooperation of British researchers with their colleagues from continental Europe, stresses Jörg Vogel. "Scientists of all ages and all disciplines must stand up for an open society." He considers it particularly important that young researchers spend time abroad, as an active exchange with scientists from other countries helps to develop new ideas and broaden our horizons.

About the Feldberg Prize:
The Feldberg Foundation is named after the German professor Wilhelm Feldberg. After studying medicine in Heidelberg and Munich Feldberg worked in the UK and returned to Germany in 1930. However, he had to flee Germany as the Nazi party came into power in 1933. Returning to London, he continued his research on signalling molecules, such as histamine, in a safe environment. There, he actively pursued research until 1990, interrupted by stays in Australia and Cambridge. Feldberg was one of the first emigrants to reach out to German scientists after the war. Germany compensated him for his lost salary and pension as a university teacher, money he has used to establish the Feldberg foundation in 1969. Since then, a German and a British scientist have been awarded this prize each year. The award winners chose at which institute in the partner country they accept the award and hold their honorary lecture, the Feldberg Lecture. Further information on the Feldberg Foundation can be found here: https://www.feldbergfoundation.org/

The press release and a picture are also available on our website: https://www.helmholtz-hzi.de/en/news_events/news/view/article/complete/joerg_vogel_receives_feldberg_prize_2019/

The Helmholtz Institute for RNA-based Infection Research:
The Helmholtz Institute for RNA-based Infection Research (HIRI) was founded in May 2017. It is a joint institution of the Helmholtz Centre for Infection Research (HZI) in Braunschweig and the Julius-Maximilians-Universität Würzburg (JMU). Based on the University hospital campus, the HIRI is the first federal institute to focus on the role of ribonucleic acids (RNAs) in infection processes. Its mission is to combine basic research with the development of new RNA-centric therapeutic approaches to treat infections. www.helmholtz-hzi.de/hiri