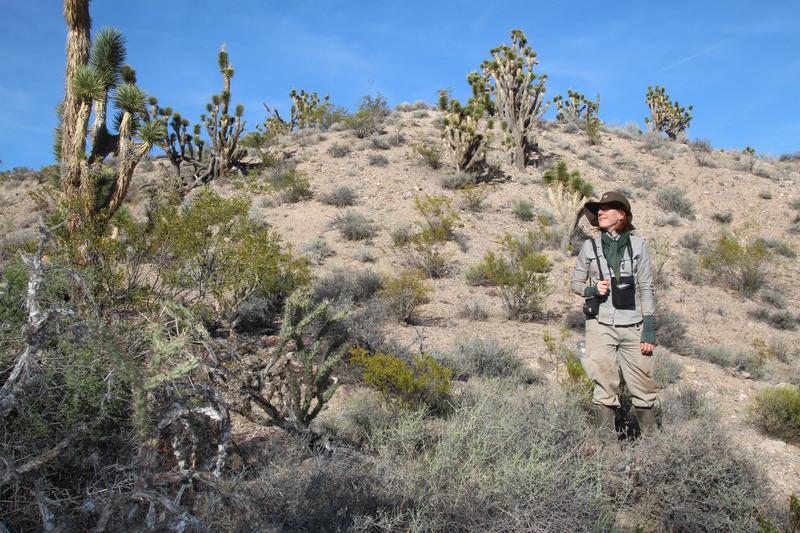 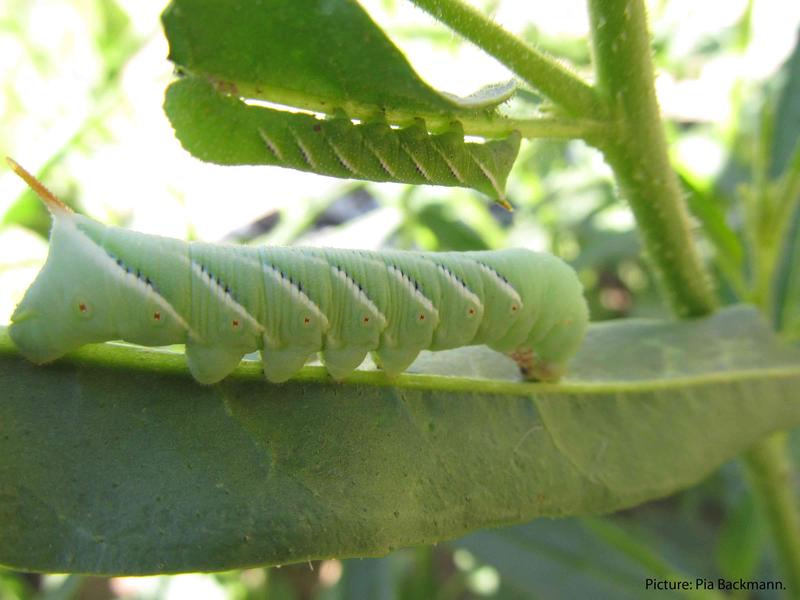 Plants cannot run away from animals which eat them, but many species have their own ways of defending themselves; they produce chemicals which don’t do hungry creepy-crawlies any good. In this way, wild tobacco plants strike back at the caterpillars of the tobacco hawk moth. A new study led by researchers from the iDiv research centre, the University of Jena and the UFZ shows that it can be worthwhile for a plant to put up with these little creatures for a few days before starting its defence. In this way, the caterpillars move to a neighbouring plant when, and only when they are mature enough to be really good eaters, thus giving plant number one an advantage in intraspecies competition.

Leipzig. Actually, one would normally assume that plants suffer disadvantages if they do not mount their defences until after herbivores have inflicted their first damage. The faster a plant reacts, the better; or so one would expect. Why, then, do some plant species take several days to produce chemical defences after they are attacked by caterpillars, for example?

An explanation has now been provided by a research team led by the German Centre for Integrative Biodiversity Research (iDiv), the Friedrich Schiller University Jena and the Helmholtz Centre for Environmental Research (UFZ) in the journal The American Naturalist. Scientists have been working on wild tobacco (Nicotiana attenuata), which the caterpillars of the tobacco hawk moth (Manduca sexta) are particularly partial to. To defend themselves, the plants produce chemical substances which are toxic to the caterpillars. The researchers have now been able to find out why the plants delay production of these substances for a few days after a caterpillar hatches from its egg, using a computer model based on observational data.

The key lies in the special ecology of wild tobacco. The species grows in desert areas in the United States where seeds wait for years in the ground for a fire and afterwards all germinate together. As a result, competition for water and nutrients between the many tobacco plants of the same age is high. If a plant then has to deal with herbivores as well, this puts it at a great disadvantage. "Wild tobacco, however, has found an ingenious way to ‘pass the buck’; the plant dispatches the caterpillars to its neighbours without further ado," says Dr Pia Backmann from the iDiv research centre and the Helmholtz Centre for Environmental Research (UFZ).

This works best when the caterpillars are already several days old, as the new model by Pia Backmann shows. Before this, the caterpillars of the tobacco hawk moth are still too small and not strong or agile enough to make their way to another plant. Furthermore, they also eat very little at this stage and the resulting damage is therefore relatively minor. Starting at around ten days of age however, eating really begins in earnest; the caterpillars now eat well over 90 per cent of the leaf mass they will consume until they pupate at about 21 days of age. Also, they are now big enough to move to another plant when things get uncomfortable; that is to say, when their host plant has ramped up its defences. For this reason, the plant optimally starts producing toxins about four days after the caterpillar infestation. It takes a few more days for the defence to become fully active.

"For tobacco plants, ‘the sooner the better’, doesn’t apply", says Prof Nicole van Dam of the iDiv research centre and the Friedrich Schiller University of Jena. "Instead, it's about activating the defence at the right time so that the caterpillar crawls to a neighbouring plant and weakens it – and the clever plant will, in the end, outperform its competitor." If the plant is too early, it may indeed succeed in killing the caterpillar after a few days. But because the production of defence chemicals uses energy, the plant’s growth will ultimately lag behind that of its conspecifics. If the defence mechanism kicks in too late, the caterpillar may stay on the plant until pupation, causing serious feeding damage which may even kill the plant.

Prof Nicole van Dam together with Prof Ian Baldwin, researcher at the Max Planck Institute for Chemical Ecology, MPI-CE, and a member of iDiv, and their team had already found, in previous laboratory experiments, that caterpillars develop more slowly and die more often under the effect of the defence chemicals. They also assessed that it pays off for caterpillars on plants with activated defences to move to another plant, which is not producing toxins. However, that this is the plant's own strategy to deal with intraspecific competition; allowing itself to be eaten for a few days and only then defending itself, could be clarified only with the assistance of the new computer model.

Lead author Pia Backmann carried out the study at the iDiv research centre and the UFZ, collecting the observational data during a residence at the field station of the MPI-CE in the United States. Since then, Pia Backmann has worked as a postdoc at the Technical University of Dresden.

Wild tobacco (Nicotiana attenuata) is related to those plant species which are used for the production of smoking tobacco. In the past, wild tobacco was smoked by some Native American tribes. The plant constantly produces nicotine to discourage mammals and other non-specialized herbivores. However, the caterpillars of the tobacco hawk moth (Manduca sexta) are adapted to this and not only tolerate the nicotine, but can even accumulate it in their bodies to protect themselves against their own predators such as birds and lizards. To defend itself against the caterpillars, wild tobacco produces toxins and so-called proteinase inhibitors, which weaken the caterpillars, inhibit their growth and can even kill them. In addition, the plant gives off fragrances to attract the caterpillars’ herbivores. However, these defence mechanisms do not operate permanently. They are activated only after the plant has registered the presence of a caterpillar, with its saliva serving as the indication. Usually tobacco plants are attacked by one caterpillar, but sometimes by several caterpillars simultaneously. Many of our insights regarding interactions between the wild tobacco and the tobacco hawk moth are based on research by Ian Baldwin and his team, who have been studying this system for more than 20 years.

Anhang der PM
After the wild tobacco plant (Nicotiana attenuata) has been attacked by a caterpillar of the tobacco hawk moth, it waits a few days and only then starts its chemical defence.