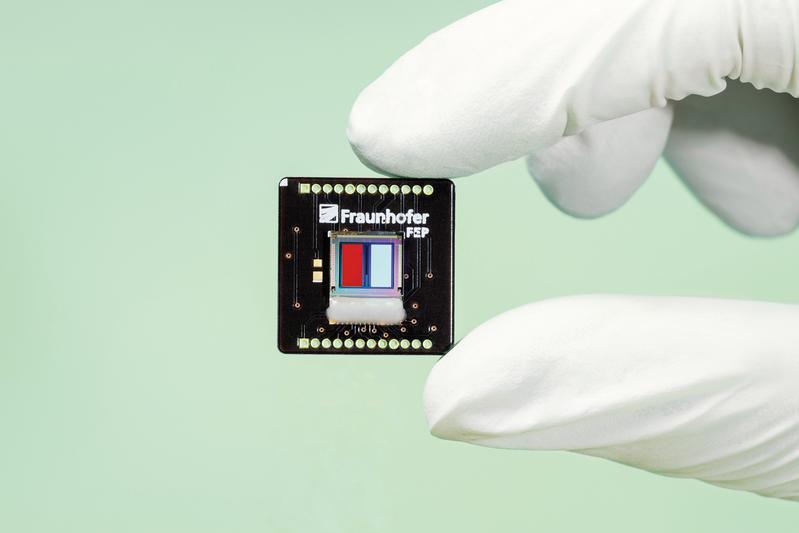 The Fraunhofer FEP has been involved in the development of OLED-on-silicon sensors for years. The researchers have recently developed a miniaturized phosphorescence sensor that combines a marker and sensor on a very small chip surface that could be produced at low cost in the long term. Researchers will present the first prototype of the sensor, which is currently designed for oxygen ratio monitoring, at embedded world 2019.

In the course of digitalization and increasingly comprehensive monitoring of processes, automated workflows, also in biomedical and environmental engineering, the range of choices in sensors is almost unlimited and they are increasingly adapted to the concrete application. The right combination of parameters must be found, depending on the requirements such as the substance or object to be detected, the excitation and reaction time, the sensitivity range, the connection type, overall system configuration, and service life.

Considering just oxygen sensors, there are many current-based sensors on the market able to cover large temperature ranges, but they are difficult to miniaturize and restricted to certain measurement points. Optical sensors, such as phosphorescence sensors, overcome these hurdles. They are popular alternatives due to their ease of handling and capability of being integrated into existing systems. The reliability, low susceptibility to interference, and simple maintenance of most devices quickly persuades users.

The Fraunhofer FEP has many years of expertise in the development and manufacture of highly integrated OLED-on-silicon electro-optical devices. This has become standard for realizing high-resolution microdisplays in Augmented- and Virtual-reality glasses, and is now increasingly under development for optical sensor solutions.

Optical fingerprint sensors have already been created by merging the display and image sensor into a so-called a bi-directional OLED microdisplay. In addition to the display function, the display pixels serve as smart illumination of the finger on the surface, whose features are then detected by the embedded photodiodes.

Now the researchers have taken another step and developed a miniaturized phosphorescence sensor. In this sensor, a chemical marker is excited by modulated blue OLED light. The phosphorescent response of the marker is then detected directly inside the sensor chip. The marker determines the substance to be measured; a typical application is measurement of an oxygen concentration.

Why not use commercial sensors? The challenge lays in the design of an extremely small sensor that combines all the functionalities and could be manufactured cost-effectively in future due to its small size. For this purpose, the OLED control and the sensor front-end were integrated into the silicon chip, then different configurations of the excitation and detection areas were investigated. In the first stage, a miniaturized phosphorescence sensor was developed. This is barely the size of a thumbnail and combines the marker and sensor in a single component. It consists of a blue OLED integrated together with a commercially available marker on the silicon chip.

”Currently, the sensor is designed to detect changes in oxygen level. We have achieved functional verification of the component with this first setup, and can use the miniaturized sensor chip for oxygen measurements in gaseous environments. In addition, we see the sensor chip as a platform for future developments, such as the measurement of further parameters and deployment in other environmental conditions,” explains Dr. Karsten Fehse, project manager in the Organic Microelectronic Devices group.

The current sensor emits blue light in an area of approx. 4.7 × 2.2 mm for exciting the oxygen-sensitive marker. The decay time of the light emitted by the marker after excitation is a parameter of the oxygen concentration of the environment. The significantly lower phosphorescence signal is recorded via integrated silicon photodiodes, amplified locally in the chip and subsequently evaluated in relation to the excitation signal with regard to the phase shift. In the future, the chip will be significantly reduced in size, the goal being <2 × 2 mm total chip size.

Thanks to the advantages of the innovative phosphorescence sensor – the small size, the combination of marker and sensor on a single chip, as well as the fast and precise evaluation of the data – the researchers see further areas of application in which the sensor design could be used.

The monitoring and evaluation of cell cultures in very small disposable culture vessels and in bioreactors is an interesting application example for the technology. ”Single-use bioreactors” usually only offer a very small installation space and a limited number of ports to which measurement systems can be connected. In the future, the sensor system will be further developed in the direction of multi-parameter measurements. Monitoring liquids after the filling process in the pharmaceutical sector, in blister packs, and for quality control of oxygen-sensitive drugs is also conceivable. The Fraunhofer FEP is very interested in project partnerships for these advanced developments.

Scientists of the Fraunhofer FEP will debut the miniaturized phosphorescence sensor for oxygen measurement at embedded world 2019, February 26 - 28 in Nuremberg at the Fraunhofer Joint Booth in Hall 4, Booth no. 4-470.