Cellular metabolism as the key to treating allergic dermatitis? 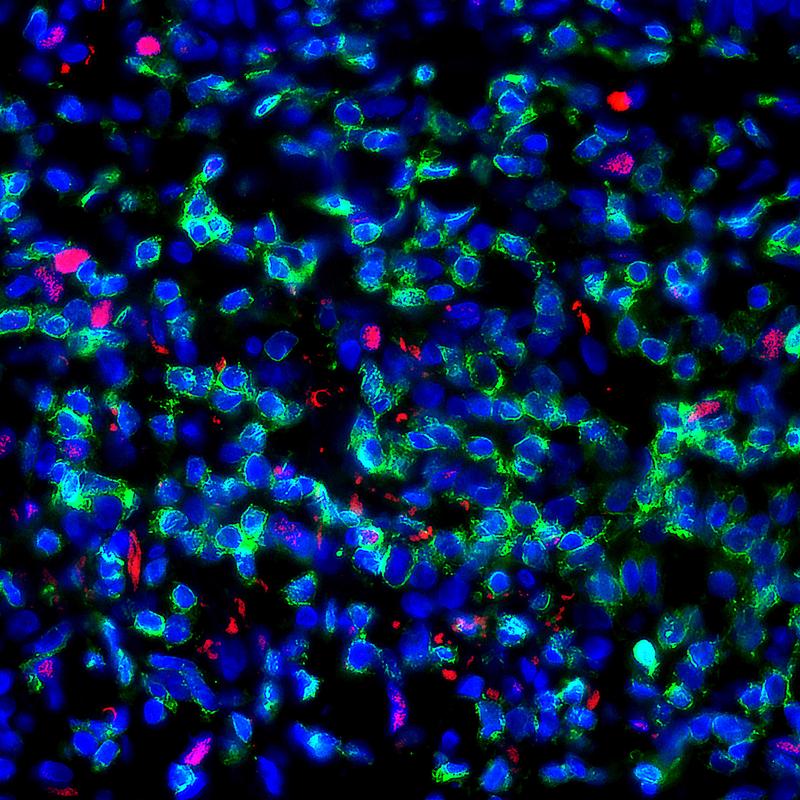 The immunfluorescence shows TH cells (in green, CD4+) in the skin of a patient with acute allergic contact dermatitis. Several of these cells express the transcription factor PPAR-γ (in red). | Quelle: Department of Dermatology, Inselspital, Bern University Hospital | Download

Researchers at the Department of Dermatology at Inselspital have discovered a relationship between cells which could advance the treatment of allergic skin diseases. Their discovery was published in Science Immunology.

The function of so-called “TH9” cells in humans remains elusive. These interleukin-9 (IL-9)-producing T helper (TH) cells play an important role in inflammatory reactions and tumor immunity in animal models. In order to better understand the role of TH9 cells in humans, Prof. Dr. Christoph Schlapbach and his research team at the Department of Dermatology at Inselspital and the Department for Biomedical Research at the University of Bern have examined these cells in greater depth.

Most notably, the team discovered that TH9 cells are not a separate population, but rather a distinct subpopulation of the already known TH2 cells which contribute decisively to the induction of allergies. As a result, they were characterised as “IL-9+ TH2 cells”. Consistent with this interrelation, the researchers have found that this cell type is involved in such allergic skin diseases as atopic dermatitis (atopic eczema, neurodermatitis) or allergic contact eczema.

In order to understand how the new cells can be distinguished from conventional TH2 cells, the team carried out modern transcriptomic analyses. In the course of this, the transcription factor PPAR-γ was identified as an important regulator of IL-9+ TH2 cells. PPAR-γ is a well-known regulator of cellular metabolism, i.e. the processes occurring in cells to produce energy and biologic building blocks. Until now, the function of PPAR-γ in fat and muscle cells was known, but its function in TH cells has only recently been examined.

PPAR-γ has already been used as a therapeutic target for treating type 2 diabetes. The fact that it also plays a key role in IL-9+ TH2 cells therefore opens up new ways for treating such allergic skin diseases as neurodermatitis. “Because PPAR-y regulates the cells that have now been characterised, we might be able to manipulate this cell population with it,” explains Christoph Schlapbach. “It is therefore conceivable that already existing medications can be used to treat diseases in which IL-9+ TH cells are involved, a process called "drug repositioning”."

Before this hypothesis can be tested in initial clinical trials, the researchers now want to examine more closely how IL-9 and PPAR-y interact in allergic skin conditions. For this purpose, continuation studies are currently being carried out at the Department of Dermatology at Inselspital.