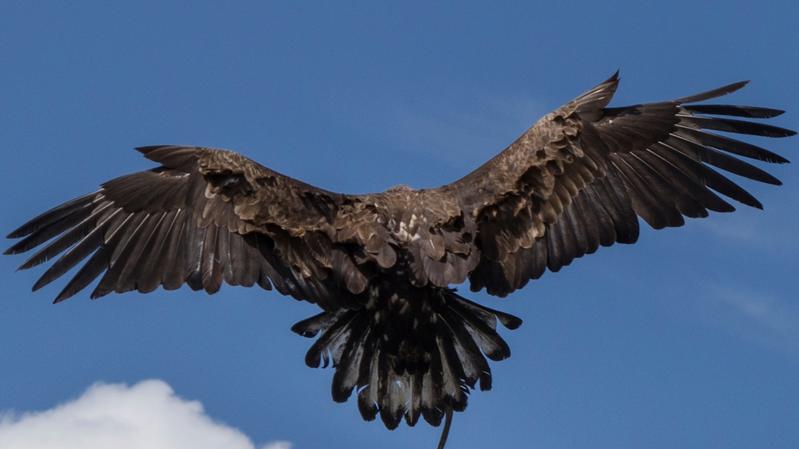 Are there any universal relationships that apply to all flying birds? | Quelle: Source: P. Herbeck-Engel, INM. Free within this content. | Download

Researchers from INM and the University of California, San Diego found that the length of the humerus bone varies in a characteristic way with the body weight of the bird to optimize lift. By contrast, the elements of the feather attachments (barbules) are spaced equally for all bird species to optimally control airflow.

Birds are the kings of the skies - they fly, master dives and land sometimes more, sometimes less elegant. Or they hover in the air with swiftly flapping wings that are no longer visible to the naked eye. In spite of these different types of flight, are there any universal relationships that apply to all flying birds? Researchers from INM and the University of California, San Diego have studied wing bones and feathers to address this issue. They found that the length of the humerus bone varies in a characteristic way with the body weight of the bird to optimize lift. By contrast, the elements of the feather attachments (barbules) are spaced equally for all bird species to optimally control airflow. These findings may be used to make aircraft more efficient. The results were recently published in the journal Science Advances.

"Although feathers of condor and hummingbird are quite different, we have found important commonalities: The barbule spacing is about the same in all investigated feathers and is about twelve microns. We suspect that this distance has proven in the course of evolution to optimize airflow during flight. It allows little air through, which increases the lift for the birds, and yet anchors the feathers together. The model even makes it possible to understand how the position of the barbule membrane flaps changes during upstroke and downstroke," says Eduard Arzt, Scientific Director at INM. This is new, because so far scientists have only studied the distance between barbs and found that it plays a role in effectively rejecting water.

The researchers also studied the influence of the most important bone during flight, the humerus. It connects the wing with the bird's body and must withstand strong lift forces during take-off and flight. It should be assumed that a simple ratio between bone length and body weight satisfies this requirement. But it is not that simple. "Bone length and body weight behave allometrically, i.e. not self-similarly, because the strength of the bone is limited. In humans, for example, the body's brain grows allometrically: in children, it grows much faster than the rest of the body while the size of the human heart scales with the rest of the body. We found such an allometric relationship between the length of the bird's humerus and its body weight: the length of the humerus grows more strongly in relation to body weight," explains Marc Meyers of the University of California.

The scientists were also able to establish relationships between the type of flight, the speed of flight, the size of the wings and the size of the humerus. "The heavier a bird is, the more lift it needs and the wing loading increases. In evolutionary terms, the bird can achieve the necessary lift either by flying faster, or by developing larger wings, or both. At the same time, the wing must be able to withstand the wing loading - this is where the humerus comes into play again. Suppose two birds are equally heavy, but have different sized wings. The larger wing loading for the smaller wing then requires, for static reasons, a larger percentage of the wingspan to be composed of the humerus bone," explains the physicist Arzt. The researchers hope to be able to derive from these findings new concepts for the construction of innovative aircraft.

Background:
For their research, the scientists resorted to wing and bone populations of the San Diego Natural History Museum and the zoos in Los Angeles and San Diego. The cooperation between the INM and the University of California at Santa Barbara was supported by a Humboldt Prize to Professor Marc Meyers.