Herpesvirus provides new insights into how the immune system works 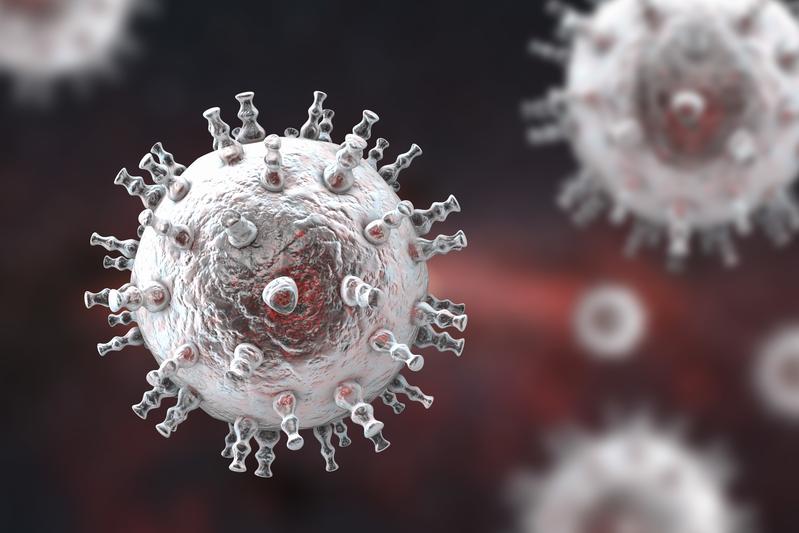 Without a functional immune system, humans would have no chance in the fight against viruses. As soon as a virus enters the body, sensitive immune system sensors detect the intruder and sound the alarm, awaking further defensive components, which then proceed against the attackers. Usually it is possible to control the infection and destroy the viruses. But viruses of a certain family have adapted well to the immune system and cannot be eliminated by it: the herpesviruses. They remain in their host lifelong after infection. A research team from the Helmholtz Centre for Infection Research (HZI) and the Technische Universität Braunschweig has discovered a herpesviral protein that specifically eliminates one component of the immune system, but uses another part for its own purposes. This allows the virus to successfully infect the host organism. The researchers published their results in The EMBO Journal.

Herpesviruses have been with humans for millions of years. They have learnt to manipulate the immune system so cleverly that they cannot be eliminated by it and remain in the body for life. How they achieve this is so far inadequately known. An important member of the large family of herpesviruses is cytomegalovirus (CMV). About half of the German population is infected with this virus. "During pregnancy, maternal CMV infection can be a major threat to the unborn child. The virus can be transmitted to the fetus and cause severe damage such as deafness and developmental disorders, "says Prof Melanie Brinkmann, who heads the research group "Viral Immune Modulation " at the Helmholtz Centre for Infection Research and has been a professor at the Technische Universität Braunschweig since July 2018.

A vaccine against CMV does not yet exist, as the mechanisms of how this virus manipulates the immune response have not been fully elucidated. "In order to fight CMV infections successfully, we need to understand how this virus uses our immune system in its favour," says Brinkmann. Within the framework of the Virtual Institute "Viral Strategies of Immune Evasion" (VISTRIE), funded by the Helmholtz Association, Brinkmann's research group has identified a tool from CMV that attenuates the antiviral immune defense shortly after its entry into the host. This tool is a protein called "m152". The target of m152 in the host cell is the protein "STING". Usually, STING is activated in a viral infection by a sensor that recognises the viral DNA. Then STING initiates a signalling cascade that results in the production of messenger substances to alert the infected cell and to set its neighbouring cells on alarm. This prevents the spread of the viral infection, because already pre-warned cells can no longer be infected.

HZI researchers discovered the protein m152 through a screening method they developed, in which they examined more than 170 CMV proteins for their potential to block the antiviral response. By means of biochemical and cell biological experiments they were able to show that m152 binds to the protein STING and, by that, the activation of the STING signalling cascade is slowed down considerably. "In cells that were infected with genetically modified CMV viruses, we could visualise by video microscopy that the activation of STING is significantly slower when the m152 protein is intact," says Markus Stempel, a PhD candidate in Brinkmann's team and the first author of the publication. "So the virus creates a time window in which it can start its own multiplication before it can be attacked by the immune system."

The detailed study of this mechanism also allowed the researchers to gain new insights into how the protein STING functions during an infection with CMV: STING additionally activates another signalling cascade, which does not inhibit the viral infection but is even used by the virus to produce new viral particles. "STING has two faces, so to speak: It combats the virus infection with one signalling cascade that CMV handles elegantly with m152, but with a second cascade STING supports the viral multiplication", says Brinkmann. "This study is a very vivid example of how our research on viruses can provide new insights into cellular processes." In the future, Brinkmann's team will collaborate with researchers from the HZI, the Technische Universität Braunschweig and Hannover Medical School (MHH) to identify antiviral agents for the treatment of CMV infections.