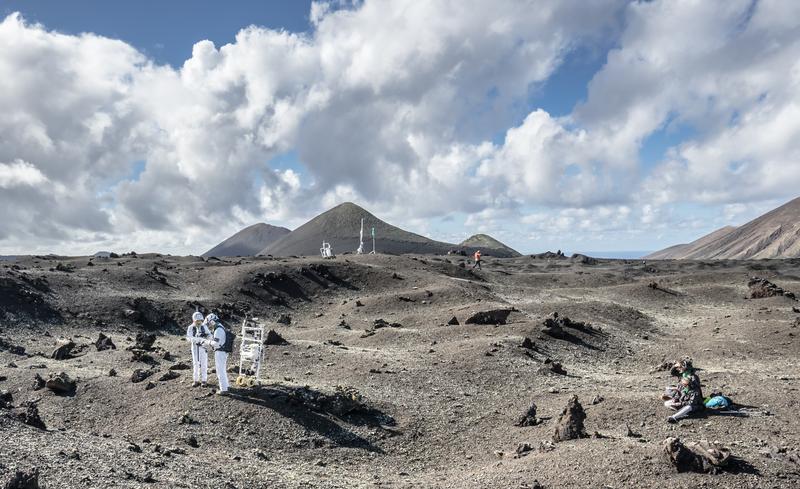 Steering a rover from a few hundred kilometers away is a complex matter. The vehicle has to avoid obstacles as well as collisions and dead ends. It has to collect samples, analyze them and transmit the data - despite recurring technical delays and communication problems. At the end of 2019, astronaut Luca Parmitano should be steering such a rover from space. The rover is going to be located on Lanzarote, whereas Parmitano will be on board the International Space Station ISS.

A team of scientists, including Angelo Pio Rossi, Professor of Earth and Planetary Science at Jacobs University Bremen, visited the Canary Islands in November for a dry run. The geologist coordinates the work of several European scientists, characterizes the route the rover will travel, collects data and develops a 3D model of the surface to simulate the journey. The work took place during the Pangaea-X 2018 campaign, a European Space Agency (ESA) training program for astronauts that combines geology and space exploration with high-tech equipment.

The volcano island is the perfect environment for such tests. It has geological similarities to Mars, the climate is dry and the vegetation is manageable. Already a year ago Rossi was on Lanzarote to perform analyzes on planetary analogues and introduce them to astronauts. For future missions to the Moon, Mars or asteroids, they are to be enabled to take the right rock samples for further scientific analysis. They must be able to identify individual rock types and determine the best areas for sampling.

"What happens on Lanzarote gives an idea of what will happen on the Moon at some point," says Rossi. Just as the ISS now orbits the Earth, one day a space station should be orbiting the Moon, the "Lunar Oribital Platform Gateway". It will possibly be an intermediate station for further journeys to Mars, but also a starting point for explorations of the Moon's surface, for example with a rover. "The astronauts will control it from the station, collect valuable samples and send data and samples back to Earth. Human explorers are still important, but remotely controlled robots can do a lot" says Rossi.

The Italian's interest in planets has to do with his passion for geology. "It looks back in time, provides information about the history of the Earth. Space is an extension of the Earth's history, extraterrestrial geology provides information about the origin of the Earth and it is the key to understanding the Solar System as a whole," says Rossi, who studied geology at the University of Chieti-Pescara and received his doctorate in planetary science there. He then worked for three years at the European Space Agency in the Netherlands and continued his research at the International Space Science Institute (ISSI) in Bern, Switzerland.

The 42-year-old does not have doubts on the usefulness of expeditions into space. "To want to discover something new lies in human nature," says Rossi. "There are still so many unanswered questions, so many riddles to decipher. So far, we've only explored with humans a tiny section of the Moon." Space travel is also a driver for the development of new technologies, for example in telecommunications, the optical industry or materials science. Also the extraction of resources from space is becoming increasingly important.

The scientist has been researching and teaching at Jacobs University since 2011, having followed his wife to Bremen. "I find the internationality of the students and teachers very enriching. On campus you get in touch with each other very quickly, even with colleagues from other disciplines. This promotes interdisciplinary cooperation."

In the future, Rossi wants to focus more intensively on the geological mapping of planetary surfaces. They reproduce the observations and evaluations of the processes on or below the surface of planetary bodies and their history and are therefore a direct aid in their research. It concentrates on three celestial bodies that will be at the center of European space travel in the coming decade: Mars, Mercury and the Moon.

About Jacobs University Bremen:
Studying in an international community. Obtaining a qualification to work on responsible tasks in a digitized and globalized society. Learning, researching and teaching across academic disciplines and countries. Strengthening people and markets with innovative solutions and advanced training programs. This is what Jacobs University Bremen stands for. Established as a private, English-medium campus university in Germany in 2001, it is continuously achieving top results in national and international university rankings. Its more than 1,400 students come from more than 100 countries with around 80% having relocated to Germany for their studies. Jacobs University’s research projects are funded by the German Research Foundation or the EU Research and Innovation program as well as by globally leading companies.
For more information: www.jacobs-university.de
Facebook | Youtube | Twitter | Instagram | Weibo