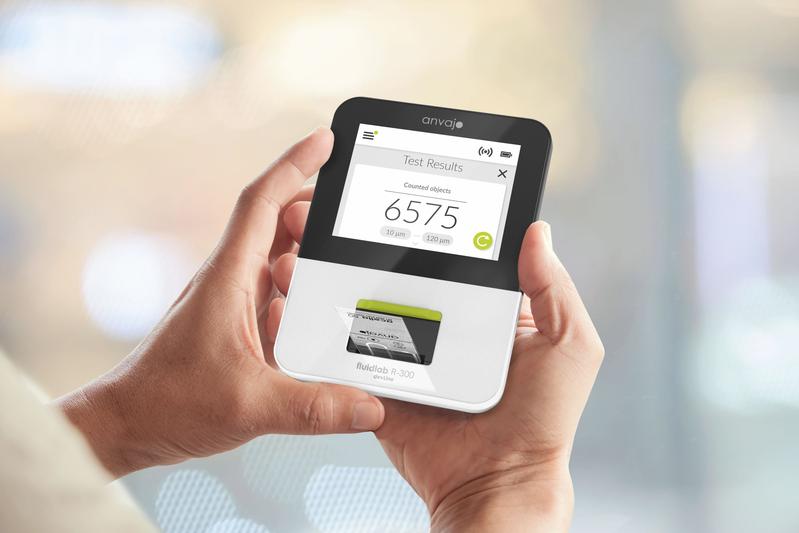 Concept for a portable, optical measuring instrument which can quantitatively read out the new detection method for determining glyphosate. | Quelle: Photo: anvajo.com | Download

The patent-pending principle for detecting glyphosate, which is based on specific biochemical bonds of hydrogel microparticles as well as optical readout methods. | Quelle: Photo: Professor Tilo Pompe | Download
❮ ❯

Herbicides containing glyphosate often hit the headlines, because this chemical compound is widely regarded as potentially carcinogenic. The ability to quickly and easily detect glyphosate is therefore an important topic, one which is currently being investigated by researchers from Leipzig University and the TU Dresden in cooperation with three companies from Saxony: over the next three years, they intend to make a novel technology for the quick and simple detection of glyphosate ready for the market.

With this new technology, the project partners aim to contribute to the application of inexpensive and local monitoring for recording the condition of water and food, but also to facilitate an objective discussion of the problem and reduce uncertainty in society. Supported by the Free State of Saxony and the European Regional Development Fund (ERDF), the Saxon Development Bank (SAB) has earmarked some 1.9 million euros in funding for the collaboration, which is being managed by the company UMEX GmbH Dresden.

“The broad-spectrum herbicide glyphosate is the subject of much controversy in our society, because some argue that it may pose a threat to human health and could have a negative impact on the biodiversity of natural ecosystems,” explains Professor Tilo Pompe of Leipzig University’s Institute of Biochemistry. His institute is developing the new technology together with the team led by Dr Kai Ostermann at the Institute of Genetics at the TU Dresden and the Saxon companies Anvajo GmbH, UMEX GmbH Dresden and IfU GmbH Privates Institut für Umweltanalysen. “Ultimately, there should be a small table-top device, possibly even a portable handheld gadget, into which you would insert a readout chip. We are basing our work on a system provided by our project partner, the company Anvajo. At present we assume that the first devices will be on the market and being used by pilot customers two years after the end of the project, in around 2023,” explains Pompe.

The partners are planning to develop two product lines for the diagnostics and consumer sectors. The aim is to create a quantitative measurement system for users in the fields of food monitoring, public water body monitoring and water supply, such as environmental laboratories, waterworks and wastewater associations. In addition, the project partners hope to develop a qualitative measurement system for individual applications that could be used in trade, in decentralised drinking water supplies, in small and medium-sized companies in the beverage industry as well as in healthcare facilities.

They will build on joint research results which have already yielded a novel detection principle for glyphosate, for which a patent application has been filed. So far, it has only been possible to detect the controversial substance by means of a complex and expensive laboratory diagnostic procedure. “The project brings together the existing expertise of the Saxon companies and the two Saxon universities, and will culminate in a platform technology for a new type of easy-to-use on-site analysis system, which should be accessible to a wide range of users for a variety of applications and also commercially marketable,” explains Dr Ostermann from the TU Dresden. According to Ostermann interest in such a technology is significant, because there is a great deal of uncertainty surrounding the subject of glyphosate and its effects.