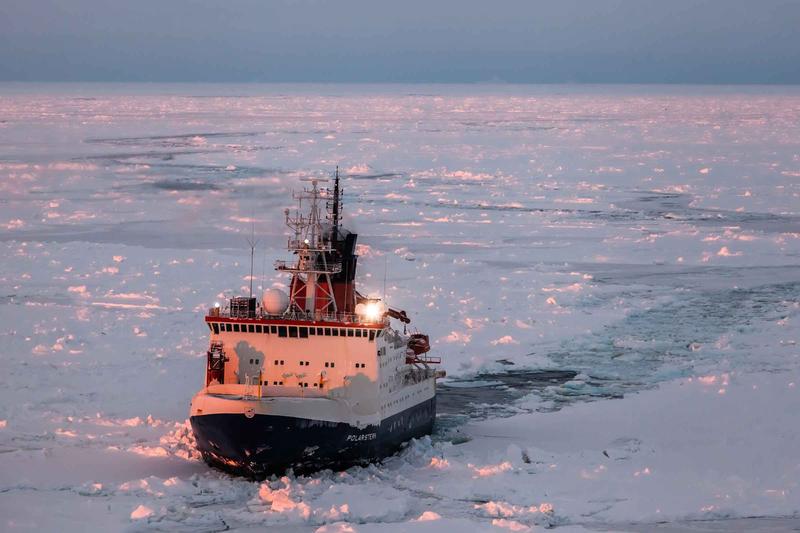 An international team of scientists heads to Antarctica this week (4 February 2019) to investigate a mysterious marine ecosystem that’s been hidden beneath an Antarctic ice shelf for up to 120,000 years.

The iceberg known as A68, which is four times the size of London, calved off from the Larsen Ice Shelf in July 2017. The scientists will travel by ship to collect samples from the newly exposed seabed, which covers an area of around 5,800 km2. Ship expeditions have tried to reach the area without success. It is an urgent mission. The ecosystem that’s likely been hidden beneath the ice for thousands of years may change as sunlight starts to alter the surface layers of the sea.

The team, led by the Alfred Wegener Institute, Helmholtz Centre for Polar and Marine Research (AWI) in Germany, leaves Punta Arenas on 9th February to spend over nine weeks on board the AWI research ship RV Polarstern. Satellite monitoring is critical for the ship to navigate through the sea-ice covered waters to reach this remote location, which sits east of the Antarctic Peninsula.

Dr Boris Dorschel of Alfred Wegener Institute is leading the mission. He says:

“The expedition to Larsen C is an unprecedented opportunity to conduct international and interdisciplinary scientific research in this climate sensitive region. Now is the time to address fundamental questions about polar continental ice shelves under climate change.”

“Larsen C is a long way south and even in these times of record lows in Antarctic Sea ice, there’s lots of sea ice in our study area. But this is important science, so we will try our best to get there to unlock the secrets of Larsen C and A68, supported by high-definition satellite data and the option of surveying the sea ice by Polarstern’s helicopters.”

The team will investigate the area previously under the ice shelf by collecting seafloor animals, microbes, plankton, sediments and water samples using a range of equipment including video cameras and a special sledge pulled along the seafloor to collect tiny animals. They will also map the seafloor using sonar.

Marine biologist, Dr Huw Griffiths from British Antarctic Survey, is leading some of the seafloor biology research. He says:

“The calving of A68 is a unique opportunity to study marine life that is facing dramatic environmental change. A68 is one of the largest icebergs ever recorded and gives us an extraordinary chance to explore a world that we know virtually nothing about, which is normally hidden under hundreds of metres of ice.

“This environment has been without sunlight for thousands of years and is likely to be home to a specially adapted community of animals that can cope with very little food. The break off of this enormous iceberg will have a similar effect to suddenly taking the roof off a cave. For the first time in thousands of years microscopic plants will be able to bloom at the surface, changing the food chain, and allowing different species to colonise and take over.”

Printable images are available at: https://www.awi.de/en/about-us/service/press/press-release/scientific-expedition-heads-to-newly-exposed-antarctic-ecosystem.html

The first ever footage and stills of the Larsen C iceberg A68 are available from the BAS ftp site: ftp://ftp.nerc-bas.ac.uk/pub/photo/Larsen-Ice-Shelf
To download individual files: do not use an FTP Client, simply open the above link with any standard web browser (Firefox, IE, Safari etc), right click on the filename and select ‘save target/link/file as’ to begin the download. NB for Mac users: if requested to login, simply click on

The Larsen C Special Area for Scientific Study was established by CCAMLR in 2017 for a period of ten years, after meeting the criteria for designation of such areas as agreed in 2016. This allows for scientific research to be undertaken in the area without any impact from commercial fishing, to address questions relating to how biological communities develop over time, and how new species colonise previously ice-covered areas. More about CCAMLR here: https://www.ccamlr.org/
The Larsen C calving event of A68 may simply reflect the natural growth and decay cycle of an ice shelf, and is not necessarily due to changes in environmental conditions.

British Antarctic Survey (BAS), an institute of the Natural Environment Research Council (NERC), delivers and enables world-leading interdisciplinary research in the Polar Regions. Its skilled science and support staff based in Cambridge, Antarctica and the Arctic, work together to deliver research that uses the Polar Regions to advance our understanding of Earth as a sustainable planet. Through its extensive logistic capability and know-how BAS facilitates access for the British and international science community to the UK polar research operation. Numerous national and international collaborations, combined with an excellent infrastructure help sustain a world leading position for the UK in Antarctic affairs. For more information visit: www.bas.ac.uk

The Alfred Wegener Institute, Helmholtz Centre for Polar and Marine Research (AWI) conducts research in the Arctic, Antarctic and oceans of the high and mid-latitudes. It coordinates polar research in Germany and provides major infrastructure to the international scientific community, such as the research icebreaker Polarstern and stations in the Arctic and Antarctica. The Alfred Wegener Institute is one of the 19 research centres of the Helmholtz Association, the largest scientific organisation in Germany. For more information visit: www.awi.de/en or follow us on Twitter (https://twitter.com/AWI_Media) and Facebook (www.facebook.com/AlfredWegenerInstitute).