Tracking down a feat of nature 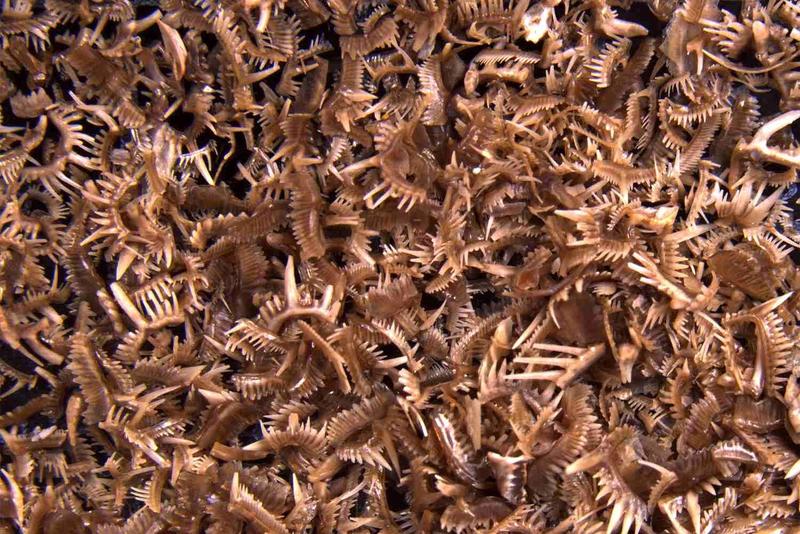 Conodonts belong to the one of the oldest known groups of vertebrates and were among the first to develop hypermineralised skeletal tissue. | Quelle: (Image: FAU/Emilia Jarochowska) | Download

Approximately 500 million years ago, the evolution of a mineralised vertebrate skeleton had a knock-on effect, causing many new species to emerge, which in turn conquered new habitats. But how exactly did the skeleton develop? A palaeontologist at Friedrich-Alexander-Universität Erlangen-Nürnberg (FAU) is now researching this question in a project funded by the German Research Foundation (DFG).

Vertebrates’ skeletons are unique in that they become mineralised as they develop, allowing them to become hard whilst remaining flexible. ‘The mineralised vertebrate skeleton consists of nanocrystals, which provide stability, like bricks in a wall,’ explains Dr. Emilia Jarochowska from the Chair for Palaeoenviromental Research at FAU. ‘Unlike bricks, however, the nanocrystals can overlap. This flexibility is possible thanks to organic substances between the crystals. It is a unique feature.’

It is not surprising, therefore, that this skeleton tissue became so successful in evolution. When it developed, around 500 million years ago, it led to an explosion in the diversity of species. ‘The skeleton led to teeth, scales and finally bones being developed. Teeth, for example, allowed species to attack new prey,’ Dr. Jarochowska continues. ‘They became more specialised over time, depending on what the respective species ate.’ Vertebrates with skeletons also conquered aquatic ecosystems. ‘Before, actively swimming animals were a rarity. Hard structures are needed for organisms to be able to swim and withstand water resistance,’ says Jarochowska.

How did this feat of nature come about?

How exactly did the mineralised vertebrate skeleton, this feat of nature, develop over millions of years? This is the question that Dr. Jarochowska is researching together with Dr. Michael Bestman from the Professorship of Geology (Structural Geology) and Prof. Dr. Stefan E. Wolf from the Chair of Materials Science (Glass and Ceramics) in a new project funded by the DFG. ‘We are researching how structures at the microscopic level are connected to the function of the skeletal tissue.’ Jarochowska is concentrating on conodonts, a group of vertebrates which were one of the first to develop hyper-mineralised skeletal tissue. She hopes to discover whether conodonts have a nanogranular composite structure similar to that which the majority of biomineralising species of animals have been proven to have. This composite structure contributes to unusual material properties, for example helping to prevent fractures from spreading. At the same time, she is investigating whether the different ultrastructures needed to digest prey, in other words teeth, evolved from arrangements of nanocrystals of various sizes.

According to Dr. Jarochowska, FAU’s commitment to encouraging young researchers was at least partly behind her success in receiving funding for the project from the DFG: ‘I obtained start-up funding within the framework of the internal FAU Emerging Talents Initiative. This allowed me to carry out the preliminary work required for a successful application.’ The Emerging Talents Initiative (ETI) supports young researchers who are setting out on their career after completing a doctoral degree, providing individual support of up to a maximum of 15,000 euros, which can be used to prepare an application for third-party funding. The funding can be used, for example, to pay for staff, consumables and travel expenses. In addition, the programme offers courses at FAU’s Graduate Centre, a network of other young researchers and guidance from professors who have experience in filing applications. Further information on ETI is available on their website.