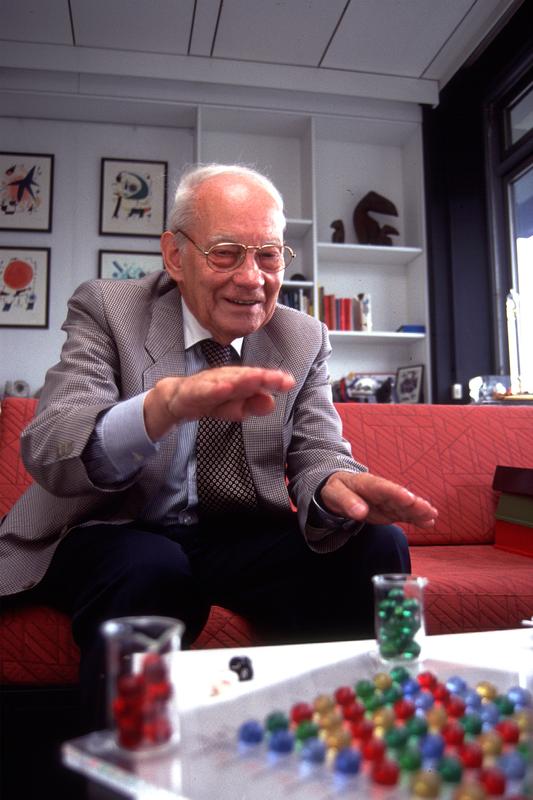 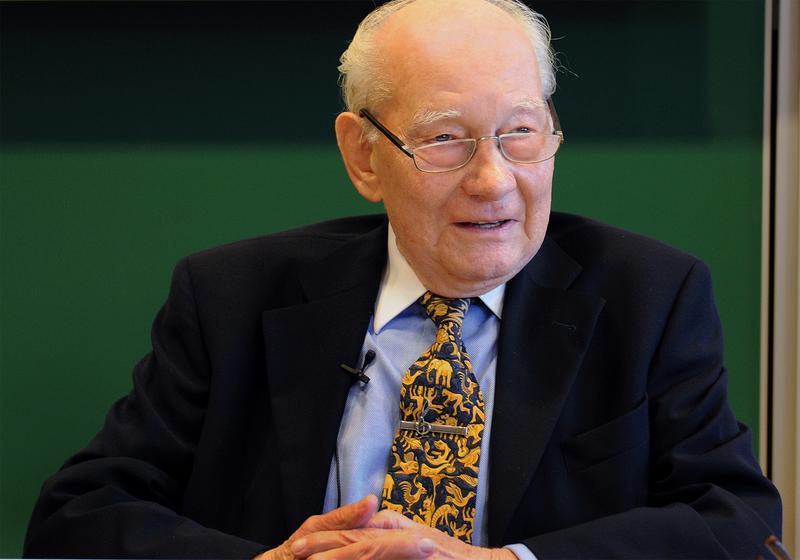 He was one of the most versatile German researchers and a popular representative of science. Manfred Eigen, Nobel Laureate in Chemistry and founder of the Max Planck Institute (MPI) for Biophysical Chemistry in Göttingen, died on February 6, 2019, at the age of 91.

“His loss will be felt deeply at our institute and within the scientific community. We will sorely miss this great thinker and ingenious scientist who made a formative impact on the lives of employees and researchers around the world. His vision to explore complex life processes with biological, physical, and chemical methods became a sustained reality at the Max Planck Institute for Biophysical Chemistry, which was founded by him in 1971. Eigen applied what he had discovered for the benefit of humans. His vision and his integrative personality continue to shape the spirit of our institute to this day. Having Manfred Eigen as a mentor was a blessing – for his employees, as well as for the wider environment in Göttingen,” says Nobel Laureate and Director colleague Erwin Neher.

Manfred Eigen had always lived up to and accepted only the highest scientific standards. Like only a few, he knew how to combine creativity and serendipity. The Max Planck Society (MPS) also benefited from his vision and his great commitment to the advancement of science in many respects, not only when he founded one of the largest and most successful institutes within the research foundation, but also when he became a member of the MPS senate.

“Manfred Eigen received the Nobel Prize for Chemistry in 1967 already at the age of 40,” emphasizes MPS President Martin Stratmann. “The Nobel Prize is the culmination of every researcher's life. But Eigen remained scientifically highly productive in the years that followed and he was often ahead of his time. His theoretical considerations on the directed evolution of enzymes from the 1980s were the starting point for the work for which the Nobel Prize in Chemistry was awarded in 2018. Manfred Eigen was instrumental in shaping the scientific campus in Göttingen. With him, the Max Planck Society loses an eminent scientist.”

“Perhaps more than anybody else, Manfred Eigen understood how to think out of the box and successfully pursue new scientific directions,” emphasizes Herbert Jäckle, long-time Vice President of the MPS and Emeritus Director at the MPI for Biophysical Chemistry. “This ability distinguished him already at the beginning of his scientific career and runs as a common thread throughout his life.”

How fast is immeasurably fast?

Already in his first years as a scientist in Göttingen, Manfred Eigen proved his gift of an unconventional thinker. In 1953, when he began to study extremely fast chemical reactions as an assistant to Karl Friedrich Bonhoeffer at the MPI for Physical Chemistry, the scientific community considered some of these processes “immeasurably fast”. But Eigen was not willing to accept this prevailing textbook opinion for which there were no sound arguments in his view. He was firmly convinced that nothing in chemistry was immeasurable and that the problem was simply a matter of insufficient methology. Therefore, the physico-chemist began to develop the so-called relaxation methods. In 1954, he presented his results to the Faraday Society in London (England), showing for the first time, that these methods made it possible to determine reaction rates at the micro- and even nanoseconds range – a scientific sensation! His breakthrough solved key issues not only in physical chemistry, but also in biochemistry, for example by allowing an understanding of how enzyme activities are controlled. Just about a decade after measuring the immeasurable, Manfred Eigen’s major scientific achievement was honored with the Nobel Prize in Chemistry together with Ronald G. W. Norrish and George Porter in 1967.

As a consequence, Eigen received numerous offers from renowned research institutions and universities around the world. He, however, pursued other goals and approached the MPS with ideas for setting up a new, interdisciplinary institute in Göttingen.

In the late 1960s, his visionary proposal how multidisciplinary science should be combined at one single institute to study the complex processes of life and its evolution was met with skepticism by the MPS. Finally, the research foundation offered Manfred Eigen the opportunity to build a new institute by fusing two existing Max Planck Institutes in Göttingen, the MPI for Physical Chemistry and the MPI for Spectroscopy, and to design it both in architectural and scientific terms. Finally, in 1971, the MPI for Biophysical Chemistry was inaugurated and the scientists of the two predecessor institutes moved to the new laboratories and offices which had just been completed. Starting with five departments, the institute grew to twelve departments during the first years. Manfred Eigen accompanied the establishment of the new departments in accordance with his principle: “It is not the research area that counts, it is the excellence of the individuals.” A conviction that the institute is still following today.

Later in his scientific career, Manfred Eigen focused on the problem of self-organization of matter and the evolution of biological macromolecules. He put Darwin’s idea of evolution by means of natural selection on a firm physical footing and applied it to molecular systems, thereby establishing a fundamental bridge between physics and biology. The concepts “hypercycle”, “quasispecies”, “error threshold”, and “sequence space” are inseparably linked with his name.

“Everything which is new has to come out of fundamental research, otherwise it is not new,” Manfred Eigen once said. But he has not only discovered new things, he also created new applications and products. His theories on the self-organization of complex molecules and his development of evolutionary machines, in which he put these theories into practice, led to a new branch of research in the 1980s – evolutionary biotechnology. The evolution machines, engineered for industrial applications by Manfred Eigen's team at the MPI for Biophysical Chemistry, were used successfully to investigate basic mechanisms of evolution in time-lapse in the laboratory. They were further employed in single molecule detection to help in finding new active substances and to use them for drug development. In the course of his career, Manfred Eigen thus established two large scientific schools, first in chemical reaction kinetics and later in the development of a molecular approach to evolutionary biology.

Convinced that scientists must communicate their research, Manfred Eigen always shared his enthusiasm for science – with the scientific community as well as with the general public, be it through television interviews or by his popular science books such as “Laws of the Game – How the Principles of Nature govern Chance” (1983), or his latest book “From Strange Simplicity to Complex Familiarities. A Treatise on Matter, Information, Life and Thought", which he published together with his long-term scientific partner and later wife Ruthild Oswatitsch. Being an extremely eloquent and captivating speaker, he inspired scientists and non-scientists alike, and he was honored with numerous awards and distinctions, at home and abroad, for his various achievements and highly acknowledged publications in different fields of science.

Last but not least, Manfred Eigen decisively contributed to promoting science. He served as Chairperson of the European Molecular Biology Organization’s advisory board and as Chairperson of the Scientific Advisory Board of the Institute of Immunology in Basel (Switzerland). As President of the Studienstiftung des deutschen Volkes (German Academic Scholarship Foundation) from 1982 to 1993, he demonstrated his great commitment to young scientists and established doctoral grants for the very best. In addition to science, Manfred Eigen never lost his great passion for music. At the age of 18, he had faced the difficult choice of pursuing a career as a scientist or as a pianist. Science and music fascinated him from early childhood. But since he lacked the opportunity to practice piano playing during World War II, he finally decided in favor of the natural sciences. However, Eigen remained closely connected to music throughout his life. As a gifted pianist, he gave numerous concerts and participated in recordings with the Kammerorchester Basel under the direction of Paul Sacher and the New Orchestra of Boston led by David Epstein.

“Manfred Eigen's interests far beyond his own field of research and the natural sciences, paired with a pioneering spirit, were his outstanding personal qualities. His approach always was to find the most elegant solution to a problem that would also be acceptable to all parties. His personality, his values, and his deep respect for his colleagues and employees have imprinted his spirit at the Max Planck Institute for Biophysical Chemistry. They are an incentive for us and set a high standard which remains a permanent challenge for the institute to live up to", says Nobel Laureate and Director Stefan Hell.

Manfred Eigen was born in Bochum in 1927. After World War II, he studied chemistry and physics in Göttingen, among others under Werner Heisenberg and Wolfgang Paul. At the age of only 24, he completed his doctorate in physical chemistry under supervision of Arnold Eucken. In 1953, he became assistant to Karl Friedrich Bonhoeffer at the MPI for Physical Chemistry, where he started research on the measurement of ultrafast reactions and later developed the relaxation methods. Four years after the first presentation of these methods, in 1958, the Göttingen MPI for Physical Chemistry appointed him as Director and Head of the Department of Chemical Kinetics. After foundation of the MPI for Biophysical Chemistry on his initiative, he headed the Department of Biochemical Kinetics there from 1971 until his retirement in 1995. For many years after retirement, Manfred Eigen continued to play an active role in research at the MPI for Biophysical Chemistry as well as at the Scripps Research Institute in La Jolla (California, USA). Eigen is co-founder of Evotec Biosystems (now Evotec AG) and DIREVO Biosystems AG (now Bayer HealthCare).

More often than practically any other German scientist Manfred Eigen has been honored. In addition to the Nobel Prize in Chemistry (1967), he was bestowed with a variety of other prestigious awards, including the Otto Hahn Prize for Chemistry and Physics (1962), the Paul Ehrlich and Ludwig Darmstädter Prize (1992), and the Lifetime Achievement Award of the Institute of Human Virology in Baltimore, USA (2005). He received 15 honorary doctorates and was a member of numerous national and international academies. His birthplace Bochum named him Honorary Citizen of the University in 2001. The University of Göttingen elected him as Honorary Senator in 1978 and the City of Göttingen awarded him an Honorary Citizenship in 2002.

Anhang der PM
Manfred Eigen during a lecture in 1979