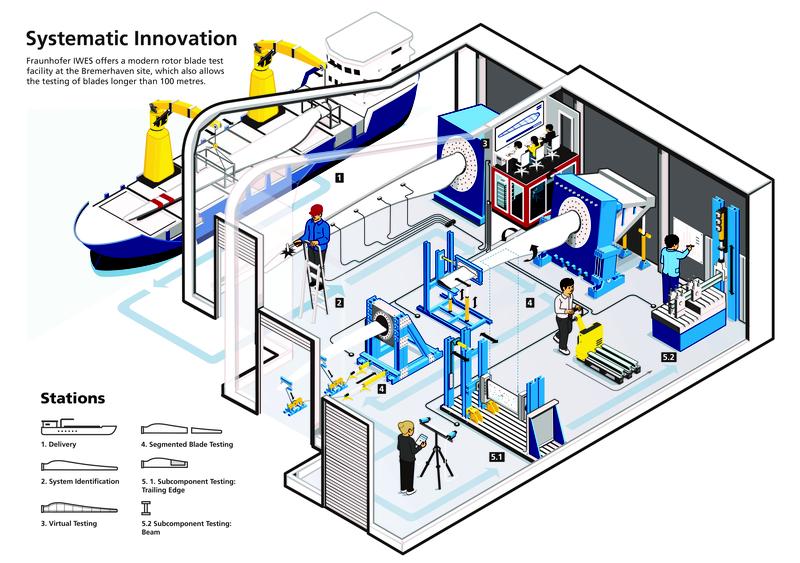 Experimental testing should remain economically viable for manufacturers despite the increasing lengths of rotor blades - either in the form of full-scale blade testing or the testing of segment or blade components. Fraunhofer IWES received funding to the tune of around € 12 million for the `Future Concept Operational Stability Rotor Blades Phase II` project. The scientists develop and test out new methods for the evaluation of modern rotor blades measuring up to 115 meters in length. To this end, a new test bench is set to be constructed in Bremerhaven as of the end of 2019. It encompasses a very large test bed for full-scale blade testing and benches for segment and component tests.

Actual developments have now exceeded the specialists’ expectations: When Fraunhofer IWES opened the first rotor blade testing hall with its 70-meter test bed back in 2009, the maximum length of a rotor blade was just 62.5 meters. This was joined by a second hall in 2011, allowing testing of blades measuring up to 90 meters. However, blades measuring 100 meters are now already entering their respective testing phases, and these cannot currently be tested at Fraunhofer IWES. But this is going to change in the foreseeable future: Ground will be broken on the new test bench in Bremerhaven by the end of the year, and the facility is expected to start operation in 2021.

The core of the planned test bench will be a new test block measuring 11x11 meters and with the option of being extended to suit higher blade lengths in future if and when required. Moreover, the test bench will comprise the possibility to offer component and segment testing – which is a novelty for the wind industry.

In addition to the higher loads encountered in full-scale blade testing, the duration of the test, indirectly related to the size, represents a further challenge. Moreover, it is not possible to assess all areas of the rotor blade in detail and model them with statistical reliability in full-scale blade testing. Testing facilities for components and segments as well as the use of new methods can close this gap. They should provide more detailed information on critical rotor blade sections in this respect.

As the investigation of segments such as the trailing edge of a blade is more cost-effective than full-scale blade testing, it will be possible for manufacturers to perform a number of tests on one component in the future and increase the statistical relevance of the results. In addition, it is possible to induce and understand specific damage mechanisms.

`It’s not just about testing longer blades – we also want to test more intelligently and expand our position as a leading institute for rotor blade tests`, explained Steffen Czichon, Head of Fraunhofer´s Department for Rotor Blades.

The aim of the ´Future Concept Operational Stability Rotor Blades Phase II´ project is to ensure that experimental testing of very long rotor blades remains economically viable for manufacturers. New testing procedures for the investigation of segments and components will offer a better understanding of critical areas and thus increase the informative value of the tests considerably. This information can be employed to design rotor blades even more precisely in the future, thereby saving on both weight and costs.