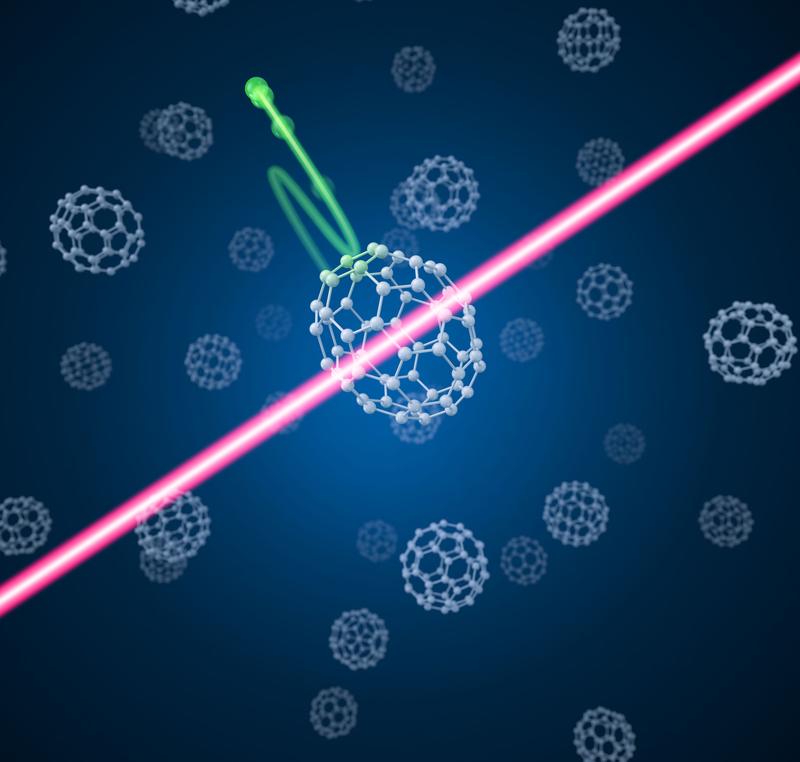 An infrared laser pulse hits a carbon macromolecule. This induces a structural transformation of the molecule and releases an electron into the environment. | Quelle: Alexander Gelin | Download

When carbon molecules C₆₀ are exposed to an intense infrared light, they change their ball-like structure to a more elongated version. This has now been observed via laser-induced electron diffraction by laser physicists from the Max Planck Institute of Quantum Optics (MPQ) and the Ludwig-Maximilians-Universität Munich (LMU) in collaboration with colleagues from the United States and Japan.

C₆₀ is an extremely well-studied carbon molecule, which consists of 60 carbon atoms and whose structure looks like a ball. The macromolecule is also known as buckminsterfullerene (or buckyball), a name given as a tribute to the architect Richard Buckminster Fuller, who has constructed buildings with similar shapes.

The laser physicists have now irradiated such buckyballs with infrared femtosecond laser pulses (one femtosecond is a millionth of a billionth of a second). Under the influence of the intense light the form of the macromolecules was changed from round to elongated. The physicists were able to observe this phenomenon by using the following trick: at its maximum strength the infrared pulse triggered the release of an electron from the molecule. Through the oscillations in the electromagnetic field of the light, the electron was first accelerated away from and then back toward the molecule (see figure) all within the timespan of a few femtoseconds. Finally, the electron scattered off the molecule and left it completely. Images of these diffracted electrons carried an imprint of the deformed structure of the molecule.

Fullerenes, the discovery of which was honored with the Nobel Prize in chemistry in 1996, are stable, biocompatible, and exhibit remarkable physical, chemical, and electronic properties. “The deeper understanding of the interaction of fullerenes with ultrashort, intense light can result in new applications in ultrafast, light-controlled electronics, which could be many order of magnitude faster than conventional electronics,” explains Matthias Kling, professor at the LMU Munich and head of the group in the Laboratory for Attoseconds (LAP) team. Laser-induced electron diffraction (LIED), the structural imaging method, has so far only been demonstrated on smaller systems, and was used on a macromolecule for the first time. “The imaging of the deformation of the buckyball, which only lasts a few tens of femtoseconds, is an important advance in laser-induced electron diffraction. It paves the way toward recording molecular movies of complex (bio)molecules,” adds Kling. As a result, the laser physicists are planning to record movies over a longer period to investigate the dynamics of fullerenes in more detail. (TN)