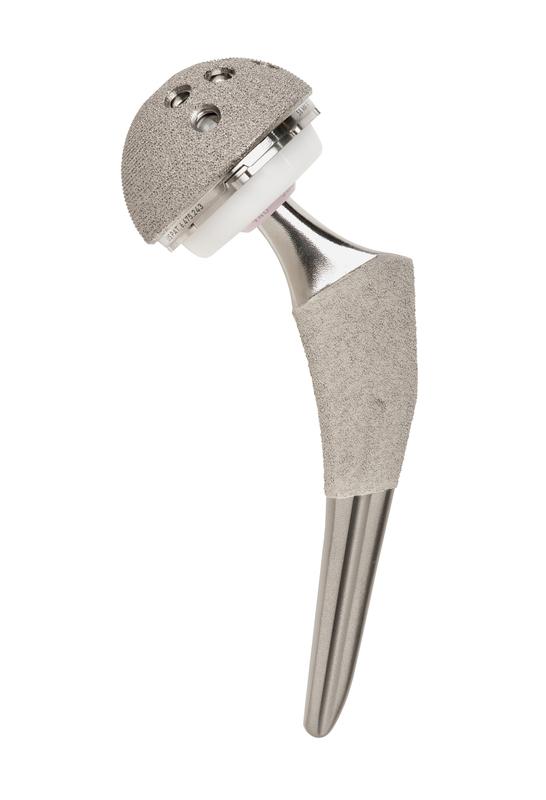 The number of hip prostheses in the EU has risen steadily over the past ten years – most notably in Austria and Germany with 300 implants per 100,000 inhabitants. The frequency of aseptic inflammatory processes between bone and implant, accompanied with loosening of the prosthesis, has increased, resulting in a shortened lifetime of the hip replacement. A consortium of eleven research and industrial partners led by the Fraunhofer Institute for Production Technology IPT has now joined forces to develop a new generation of endoprosthesis for the treatment of aseptic loosening disease.

EVPRO – short for: Extracellular Vesicles Promoted Regenerative Osseointegration – aims to counteract the shortened lifetime and to reduce the risk of inflammation of hip revision prostheses. The eleven project partners from four countries intend to ensure mobility for elderly patients and improve their quality of life and well-being by diminishing problems associated with implanted joint prosthesis and by reducing the number and frequency of subsequent medical treatments. The partners expect that EVPRO's results lead to a significant decrease in aseptic loosening in joint replacement.

The objective of EVPRO is to devise innovative biologically active coatings for hip revision endoprosthesis, which are able to control inflammation at the biointerface of the endoprosthesis and promote bone regeneration. The EVPRO coating combines a novel bioinstructive, adaptive nano-functionalized degradable biomaterial homing extracellular vesicles incorporated in a non-degradable bone-instructive microporous and nano-roughened TiO2 surface. These coatings are applied at the interface between implant and inflamed tissue, to perceive inflammation and modulate it in a proportional, self-regulating manner. Additionally, they instruct bone forming cells, so-called osteoblasts, to migrate into the coating to improve osseointegration resulting in a better healing and an increased lifetime of the implant.

In the long term, researchers expect that the number of repeated operations to replace worn implants will decrease, having a direct positive impact on the duration of the necessary hospital stay and the prescription of expensive medication. The results of the EVPRO research project can thus support the European Union's objectives on active ageing in society and lead to significant improvements in the quality of life for hundreds of thousands of citizens in the EU and beyond.

Dr. Jochen Salber from the Clinic of Surgery of the UMC Knappschaftskrankenhaus Bochum; Hospital of the Ruhr-University Germany says: “The EVPRO technology is still at an early stage but it has the potential to revolutionize medical technology in implantology improving therapies for patients suffering from aseptic endoprosthesis loosening. In addition, other clinical areas suffering from high inflammation rates might also benefit greatly from the project results.”

In coordination with the consortium of European universities and partners in medical device and biotechnology industries, the Fraunhofer IPT will focus on building a market leading portfolio of products, required for application in the next generation of hip revision endoprosthesis and beyond.

In addition to companies using the newly developed EVPRO technology directly, the partners are already working on concepts for sales and distribution along the entire value chain. EVPRO considers process steps of the manufacturing of implants as well as preclinical studies and later end users. As soon as the EVPRO-implants are market-ready, the partners intend to evaluate the possibility of a comparatively simple transfer from EVPRO hip implant coatings to primary and secondary knee implants, which bear a market potential of more than 3.2 million in the EU and the US per year. As a logical extension for a later stage utilization analysis, further joint replacements such as shoulder, ankle or elbow replacements could also directly benefit from the EVPRO technology.

Additionally, clinical areas connected with high inflammation rates for further EV-loaded products such as intramedullary nails or dental implants, connectors like screws or nails, and wound dressings for chronic wounds or serious burns represent a promising and broad chance for further exploitation of the EVPRO technology.

Partners in the EVPRO consortium

The EVPRO project started in January 2019 and is funded by the European Union within the Horizon 2020 programme with a total of 5.8 million euros.