An abundance of beneficial mutations 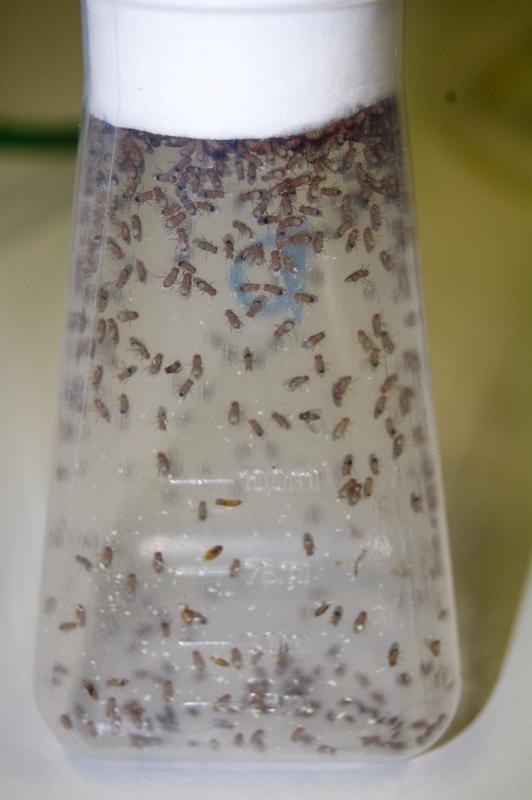 Despite its key importance, the genetic architecture of adaptive processes remains largely unresolved. Now a team of researchers from Vetmeduni Vienna, experimenting with fruit flies, has succeeded in solving at least a part of this puzzle. They were able to show that many genes can contribute to adaptation even though only some of them are actually being used (genetic redundancy).

Not just since climate change has it been of enormous interest to understand how populations adapt to new environmental conditions. Scientists assume that most adaptations involve a large number of different genes, but most molecularly characterized adaptations are based on only one or a few genes. This discrepancy has been the source of much conjecture but has remained largely unresolved.

To shed more light on this highly interesting area for the field of evolution, a research team from Vetmeduni Vienna used the method of experimental evolution. The goal of the experiment was to study the adaptive processes of fruit flies (Drosophila simulans) in a precisely controlled laboratory setting. The scientists exposed the flies to a hot environment (up to 28°C) over 60 generations and monitored the genetic changes using the latest sequencing methods. In contrast to previous studies, the authors were able to demonstrate that many genes are involved in the adaptation. A surprising result was that different combinations of genes produced similar adaptations in the different experimental populations. This leads first author Neda Barghi to conclude: “Fruit flies possess more paths for adapting to new environmental conditions than they actually use.” Experts call this observation “genetic redundancy”.

This study with fruit flies not only represents a milestone in the field of theoretical evolutionary biology but also has a concrete impact on studies which seek to demonstrate adaptive processes in natural populations. “Usually parallel signatures of selection, i.e., selection signatures found in several populations, are considered to be especially reliable,” explains Christian Schlötterer from the Institute of Population Genetics. “Our study shows, however, that this procedure must be thoroughly reconsidered in order to obtain a complete picture of the adaptive processes.”

About the University of Veterinary Medicine, Vienna
The University of Veterinary Medicine, Vienna in Austria is one of the leading academic and research institutions in the field of Veterinary Sciences in Europe. About 1,300 employees and 2,300 students work on the campus in the north of Vienna which also houses five university clinics and various research sites. Outside of Vienna the university operates Teaching and Research Farms. The Vetmeduni Vienna plays in the global top league: in 2018, it occupies the excellent place 6 in the world-wide Shanghai University veterinary in the subject "Veterinary Science". www.vetmeduni.ac.at