The inner struggle of the evening primrose: Chloroplasts are caught up in an evolutionary arms race 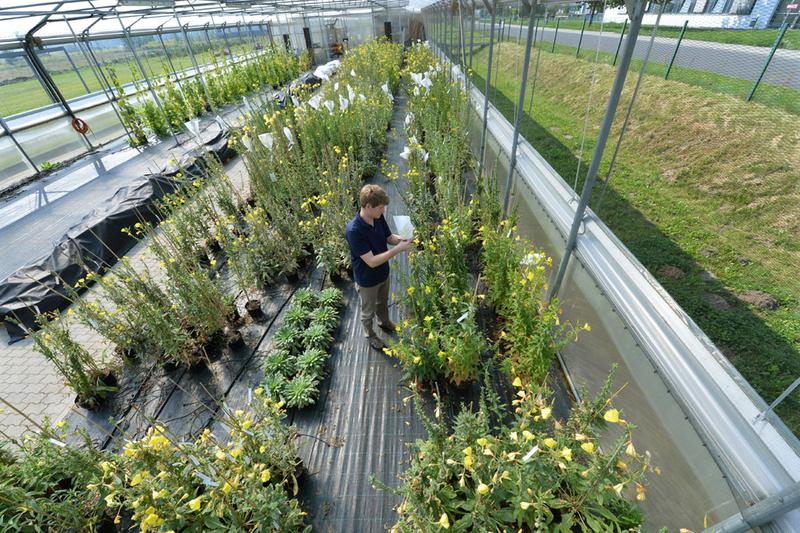 Gregor Mendel already knew that the mother and father each inherit half of their genetic material. However, this only applies to the genome in the cell nucleus. Organelles possess their own genetic material, which is passed on in most cases exclusively by the mother. But if the organelles are passed on to the offspring, there is often competition between the organelles originating from father and mother. The mechanisms underlying this biological principle are by far not understood.
A team of scientists led by Stephan Greiner from the Max Planck Institute of Molecular Plant Physiology found that the inheritance of the chloroplast genome is regulated by the fatty acid metabolism.

Inheritance is a complex issue. Which genes came from the mother and which were inherited from the father? It is certain that mother and father each inherit 50 percent of their genetic material, both in plants, as well as in animals and humans. However, that is not all, because in addition to the actual genome in the cell nucleus, there are also organelles that have their own, small genome. These include the mitochondria and, in the case of plants, the chloroplasts additionally. These organelles are normally passed on exclusively from the mother to the offspring, although there are exceptions.

One such exception is the evening primrose, a plant native to America and introduced to Europe in the 17th century. Today, it is an integral part of the Central European flora.
In plant research, the evening primrose is a popular model plant when it comes to the research of organelle inheritance, because both parents of the evening primrose can inherit the chloroplast genetic material to their offspring. But this can result in problems because it is known that the maternal and paternal organelles compete with each other. They cannot co-exist in the offspring as they compete for cellular resources, so one variant must prevail.

But how do chloroplasts fight out this battle? This question could not be answered for a long time. The research team of Stephan Greiner at the MPI-MP and colleagues from Canada, Poland and the USA have uncovered this secret in their current study. They were able to show that the fatty acid metabolism is decisively responsible for which chloroplast is superior to the other. "Most surprising for us was the discovery that the "fight" between the chloroplast genomes is not decided directly at the gene level, i.e. in the genetic material itself, but that the metabolism plays an important role here," states Stephan Greiner.

Among others, the research team identified an enzyme that catalyzes the first and thus limiting step in fatty acid metabolism. In their analyzes, the researchers found that the gene responsible for the synthesis of this enzyme is undergoing rapid evolution. These rapid changes enable an arms race between the paternal and maternal chloroplasts. They result in mutations that can lead to improved properties of the chloroplasts. An altered fatty acid synthesis could e.g. change the composition of the chloroplast shell, which can be an advantage.

The findings of the researchers help to understand the mechanisms of evolution in more detail. In fact, great competition between maternal and paternal chloroplasts can result in a non-viable progeny. In this case, the parent plants are incompatible. With the knowledge of the mechanisms behind, it would be quite conceivable that one can overcome such limits and in future would be able to make novel crossings, e.g. to breed more productive or resilient crops.