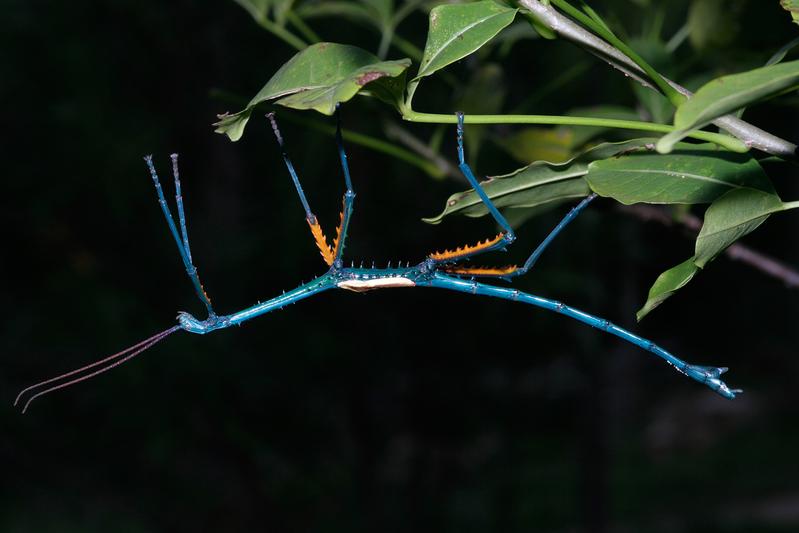 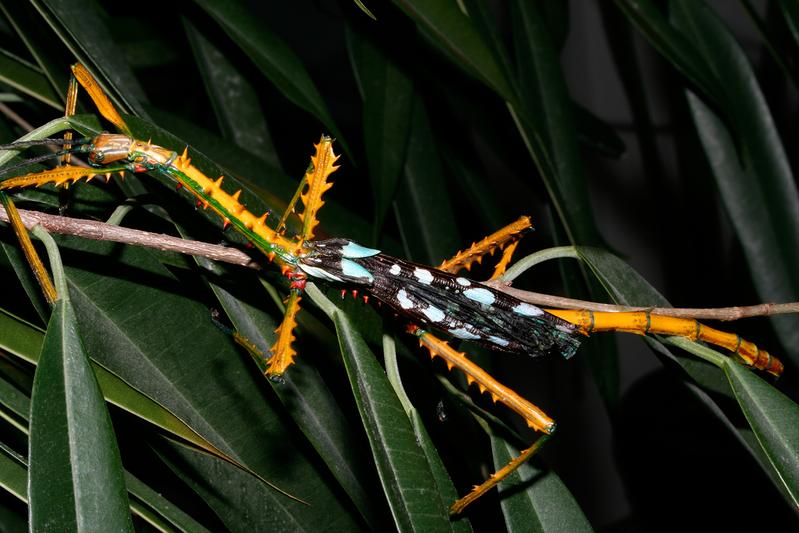 Scientists of the Bavarian State Collection of Zoology (SNSB-ZSM) and the University of Göttingen have discovered two new species of giant stick insects, which measure more than 20 centimeters body length and are among the largest insects in Madagascar. Unlike most other stick insects the adult males of these phasmids are not camouflaged at all, but show a splendid colouration. Why the males can afford this extravagance remains an exciting puzzle for evolutionary research. The work was published today in the journal Frontiers in Ecology and Evolution.

Achrioptera manga is a real gem among the stick insects - it is huge and has brightly coloured males. The most important survival rule for stick insects is to make themselves invisible to predators, but the colourful Achrioptera males have simply ignored this and survived anyway. What purpose this extravagance holds, and why the conspicuous males are not quickly eaten by birds and other animals, remains a mystery for the time being.
"It is possible that they ingest toxic substances from the plants they eat and that they accumulate them in their bodies. If this is true their bright colours might serve as a signal to potential predators that they are not edible", says Frank Glaw of the Bavarian State Collection of Zoology in Munich. "For females, camouflage could still be more beneficial than deterrence. "If there are especially colourful males in the animal kingdom, it is often because the females prefer those males for mating, but whether this explanation applies to these nocturnal animals, we do not know," adds his colleague, grasshopper expert Oliver Hawlitschek from ZSM.

It is remarkable that the males develop their splendid colours only after they have matured. Until their last larval moult they look like a brown twig and are almost invisible during the day. The amaz-ing colour change to a splendid Insect takes place within a few days.

The females, however, remain well camouflaged for the rest of their life as do most stick insects. "With this strategy, the insect order of phasmids has survived for millions of years, producing more than 3000 species and populating all the warmer regions of the world." explains Sven Bradler, stick insect researcher at the University of Göttingen. "Our data suggest that there are many new and morphologically similar species that can only be reliably identified with the help of genetics." adds his colleague Julia Goldberg.

So far, A. manga has been assigned to the externally very similar species Achrioptera fallax, which was described almost 160 years ago. But only a few years ago researchers of the Bavarian State Collection of Zoology discovered green stick insects, which correspond exactly to the first description of A. fallax. Together with colleagues from the University of Göttingen they compared the green and blue morphs and found significant genetic differences that demonstrate their specific distinctness. The discovery of the second new giant stick insect (Achrioptera maroloko) happened in a similar way. It can reach up to 24 cm body length and was previously assigned to A. spinosissi-ma. However, both species also show remarkable differences in male colouration (yellow versus blue) and genetics.