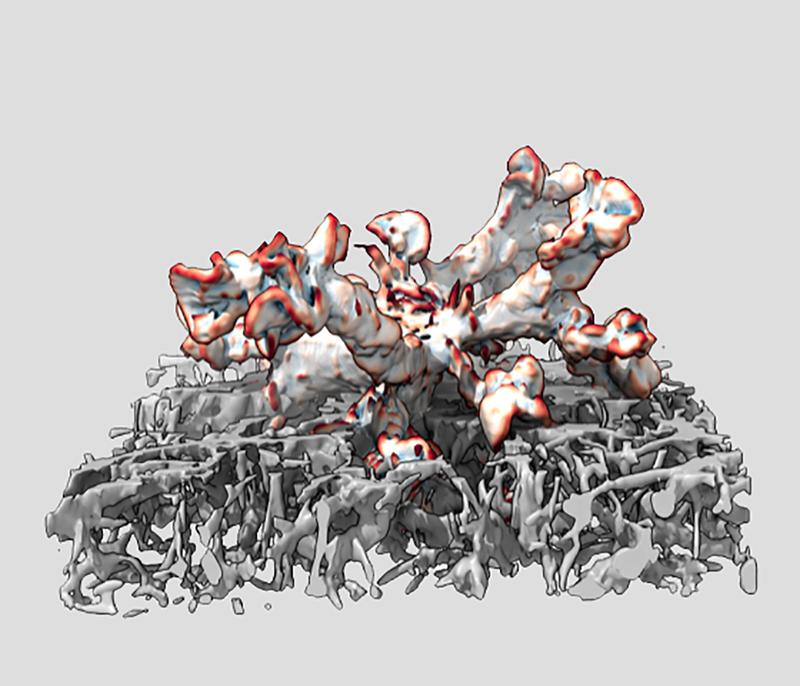 Mobile cells move around obstacles in dense tissue by selecting for larger pore sizes. Study published in the journal Nature.

How do mobile cell types like leukocytes or metastatic cancer cells reach their place of action during immune surveillance or cancer dissemination, respectively? The research group around Michael Sixt at IST Austria has now shown that leukocytes use their nucleus as a ruler to screen their surroundings for the largest pores—and thereby find the path of least resistance.

Certain cell types continuously crawl through the body to reach their place of action. For instance, all leukocytes—the white blood cells of the immune system—in the human body cover a cumulative distance of more than 100,000 km per hour. On their journey, these migratory cells have to find their way through a three-dimensional maze crowded with other cells and extracellular matrix. Certain cell types—mesenchymal cells like fibroblasts—move forward by digesting the tissue they come up against, thus leaving behind a tunnel as a wake of devastation. Leukocytes, on the other hand, show an amoeboid way of movement that allows them to move around 100 times faster. Also, they do not digest or remodel their environment (if they did, they would perforate the body with more than two million kilometers of tunnels per day!). How these extremely fast cells navigate through the dense meshwork of interstitial connective tissue fibers without harming other cells has been of great interest to cell biologists. Professor Michael Sixt and his team—including first author Jörg Renkawitz, Postdoc at IST Austria at the time of the study and now leading his own research group at the Biomedical Center of Ludwig-Maximilians-University in Munich, Germany—have now found out how leukocytes manage to choose the path of least resistance when navigating through complex environments.

To understand the mechanism behind this selective form of cell movement, the researchers built an obstacle course for leukocytes in reconstituted tissue where the cells could choose between differently sized pores while following global directional cues such as chemotactic gradients. What they observed was that whenever the amoeboid cells had a choice, they used the bigger pores, i.e. the path of least resistance. In further tests, the scientists found that the cells facilitate this active directional movement by pushing their nucleus very much to the front of the cell so it can serve as a kind of mechanical gauge or ruler. In other words, as the cell is moving forward, it applies cytoskeletal forces to insert its nucleus into several adjacent pores to measure pore sizes. Michael Sixt: “The usual organelle to steer a cell is the actin rich leading front, which explores the environment. Unexpectedly, we found that this is not what determines the path of a leukocyte. Instead, it is the nucleus that guides the cell through the bigger pores. This makes sense as the nucleus is the most bulky part of the cell and also sensitive to damage.”

Whenever the cells successfully push their nucleus through a pore, they have to retract the nucleus-free protrusions, which are still inserted in the other pores, to avoid becoming entangled or even fragmented. To tell the protrusions to retract, the microtubules disappear from these protrusions as soon as the microtubule organizing center (which always follows the nucleus) passes through a pore. This disappearance of the microtubules triggers actomyosin contraction and the cell finally retracts the remaining protrusions. When the researchers actively destroyed the microtubules, the cells entangled because the supernumerary protrusions had not retracted, kept moving forward through other pores and migrated in many directions. Ultimately, the cell fractured into pieces and died. “Our findings are based on the analysis of leukocytes. Yet, most probably, the mechanisms are the same for any other amoeboid cell types involved in developmental, immunity or regeneration processes. Also, the mechanism might help to explain how cancer cells move from one part of the body to another to form metastases and, most importantly, how to stop them from doing so,” Michael Sixt concludes.

IST Austria
The Institute of Science and Technology (IST Austria) is a PhD-granting research institution located in Klosterneuburg, 18 km from the center of Vienna, Austria. Inaugurated in 2009, the Institute is dedicated to basic research in the natural and mathematical sciences. IST Austria employs professors on a tenure-track system, postdoctoral fellows, and doctoral students. While dedicated to the principle of curiosity-driven research, the Institute owns the rights to all scientific discoveries and is committed to promote their use. The first president of IST Austria is Thomas A. Henzinger, a leading computer scientist and former professor at the University of California in Berkeley, USA, and the EPFL in Lausanne, Switzerland. The graduate school of IST Austria offers fully-funded PhD positions to highly qualified candidates with a bachelor's or master's degree in biology, neuroscience, mathematics, computer science, physics, and related areas. www.ist.ac.at

Animal welfare
Understanding cell biological processes is only possible by studying real cells and the natural physiological environments of organisms, in this case of mice. No other methods can serve as alternatives. The animals were raised, kept and treated according to the strict regulations of Austrian law.