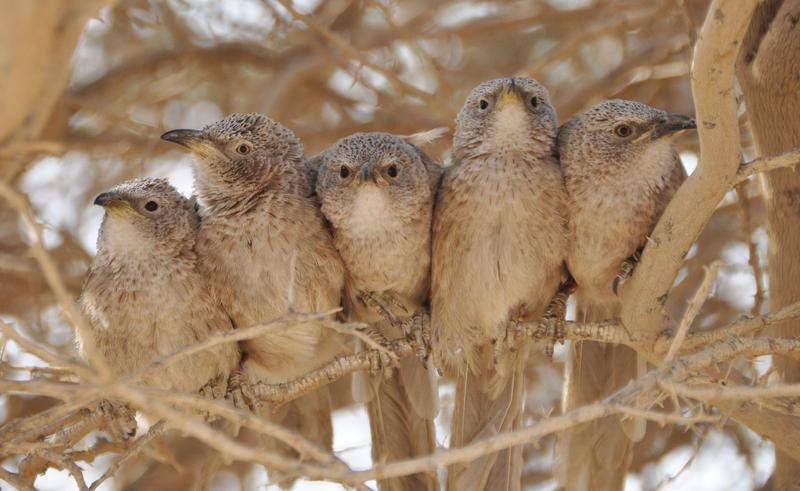 Cooperative breeding may facilitate the development of sophisticated communicative abilities such as intentionality and joint attention skills. Two new studies of researchers of the Max Planck Institute for Ornithology in Seewiesen, the Max Planck Institute for Evolutionary Anthropology in Leipzig and the University of Osnabrück provide the first evidence that a cooperatively breeding bird species (Arabian babblers) demonstrates distinct hallmarks of joint-attentional skills, which have been traditionally ascribed to humans only. This result also shows that an ape-like cognitive system is not a necessary pre-condition for joint-attention skills.

Humans’ cooperation and communication strongly rely on the ability to intentionally coordinate attention with conspecifics, a socio-cognitive capacity termed joint attention. The development of these skills is a fundamental milestone in the ontogeny of human communication with earliest signs being already present in the first years of life. “For example, when my 18-months-old son wants me to follow him to a certain location”, said Yitzchak Ben Mocha, the leading author of the two studies, “he calls me, waves his hands to attract my attention, starts to move into the desired direction, and frequently looks back to check my behaviour. He also elaborates his soliciting behaviour and returns to re-engage me in case I am too lazy to cooperate”. Such intentional coordination of attention has been traditionally regarded as uniquely human. Some scholars even see it as the “small difference that made a big difference” in the evolution of our species’ social cognition.

The studies tested whether the presence of an ape-like cognitive system is a necessary condition for - and whether the intensive alloparental care that characterises humans may facilitate - sophisticated socio-cognitive performances as intentional communication and joint-attention. As a model system the researchers studied a bird species, the Arabian babbler (Turdoides squamiceps), that lacks an “ape-like cognitive system”, but relies heavily on systematic alloparental care. Arabian babblers are thrush-size song birds which live in harsh desert habitats where all group members cooperate intensively to survive and reproduce. To ensure valid comparisons with human studies, the multidisciplinary team of ornithologists, primatologists, and comparative psychologists applied methods that have been traditionally used to infer intentional communication and joint attention in pre-linguistic human children.

“We documented key hallmarks for intentional communication and joint attention-based communication in very different contexts: Signallers conspicuously waved their wings and vocalized to solicit their fledglings to follow them from shelter to shelter. But they also used subtle presentations of objects to invite members of the opposite sex to sneak away and copulate hidden behind bushes”, said Ben Mocha who have been studying Arabian babblers for last decade. To coordinate their travel, signallers frequently looked back to check on their partners, and actively re-engage them if they stop following“. It is fascinating to observe that a relatively small-brained species uses distinct behaviours which have traditionally been used to characterize joint-attentional skills in humans” said Simone Pika, the supervisor of the studies. “Our results thus provide further support for the hypothesis that cooperative motives may have facilitated the development of elaborate socio-cognitive and communicative performances.”