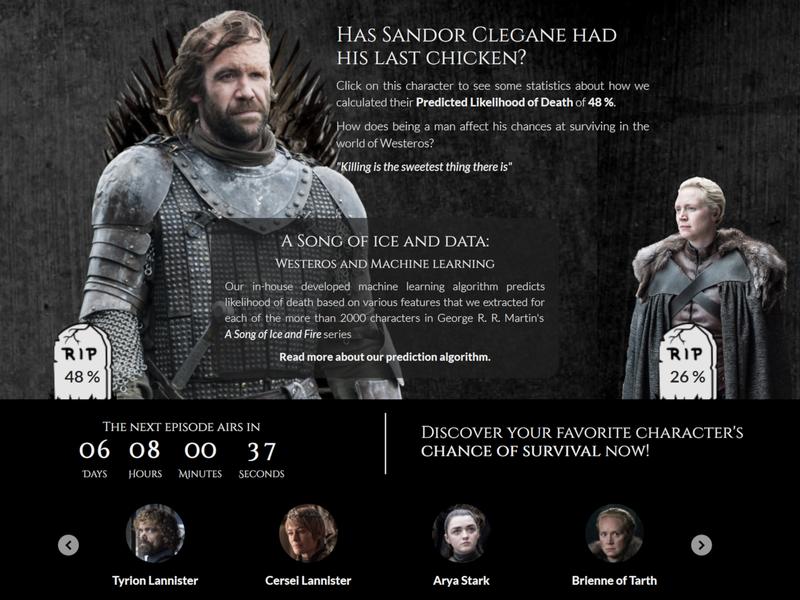 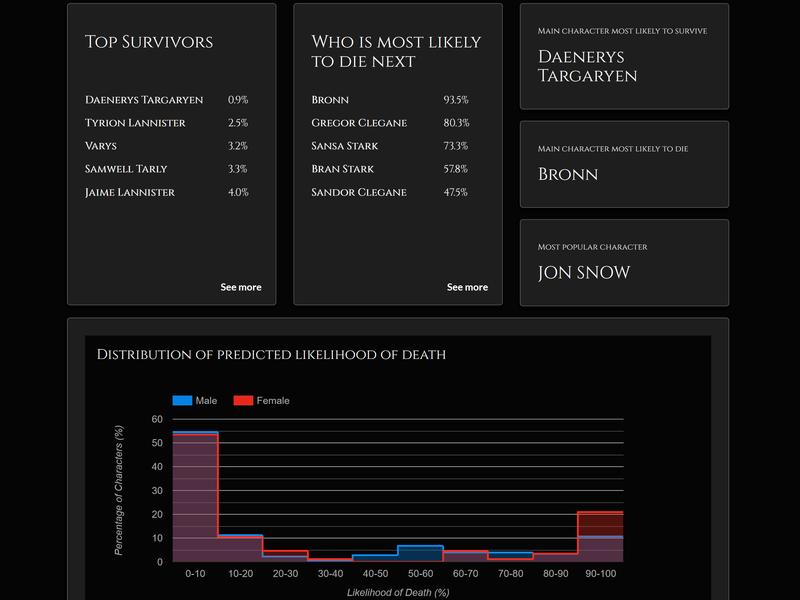 A snap shot of the “Ranking & Statistics” page which summarizes some of the project's key findings, such as the list of the 5 characters who are likeliest to survive. | Quelle: Image: GoT-Team 2019 / TUM | Download
❮ ❯

Shortly before the curtain drops on the hit HBO show “Game of Thrones” (GoT), students attending a computer science seminar at the Technical University of Munich (TUM) embarked on an unusual scientific mission: predicting which character has the best chance to sit the coveted Iron Throne.

Students at the Technical University of Munich developed an application that scours the web for data about Game of Thrones, then crunches the numbers using a set of artificial intelligence algorithms that they created to predict the survival chances of each of the Game of Thrones characters.

Back in 2016 and just before the airing of Season 6, students of the same course created an algorithm that accurately predicted Jon Snow’s resurrection.

Similar algorithms are used in medicine and finance

The algorithms developed now by the students predicts that Daenerys Targaryen has the highest chance (99%) of surviving the harrowing GoT world. Her Hand of the King, Tyrion Lannister, also has a promising 97% survival rate.

Survival rates are predicted using longevity analysis – a technique similar to scientific studies that examine the effects of treatments and complications on cancer patients. The full list of characters and their survival chances are available online at https://got.show.

Savvy GoT fans can get an in-depth look into the main reasons for the algorithm’s predictions. For instance, being born in Winterfell to the House of Stark as well as only being married once seems to increase the chances of Sansa Stark to be eliminated in the upcoming season; her predicted likelihood of death is 73%.

Fans interested in exploring the differences between the plot of the TV show and the story told by the books underlying the TV series, can find a side by side comparison of details about characters, including age, status (dead vs. alive) and longevity prospects.

The work on the survival chances algorithm is part of a JavaScript seminar given each semester at the Technical University of Munich computer science department. During the course, students learn how to design, develop and deploy intelligent computer systems.

Lead mentor of the class, Dr. Guy Yachdav comments that “while the task of predicting survival chances for Game of Thrones characters relies on data taken from the world of fantasy, the exact same Artificial Intelligence techniques are used in the real world and are having a powerful impact on our everyday lives.”

Professor Burkhard Rost heading the Chair for Bioinformatics at TUM’s Informatics faculty says: “The combination of passion and teaching is a brilliant way to create new tools that matter. In our course at TUM we found a fun way to teach students how to use this technology and prepare them to build the next big thing once they graduate.”