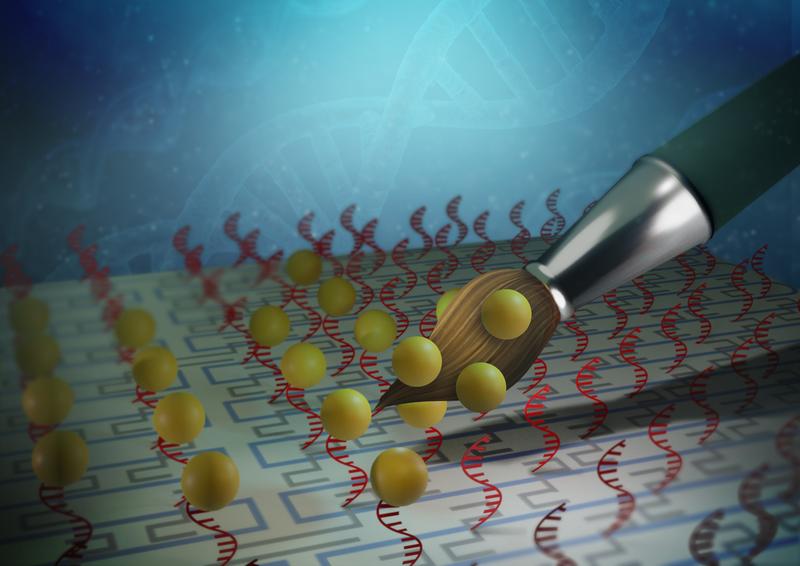 Personal drug delivery or nano-robotic systems could be a key concept for future medical applications. In this context, scientists around David Ng (Department of Prof. Tanja Weil) of the Max Planck Institute for Polymer Research (MPI-P) have recently developed a technology to customize the shapes of polymers and polymeric nanoparticles using DNA. In both 2D and 3D, precise patterns of structures composed of biocompatible polymer materials can be easily designed and constructed on a template.

In the range of a millionth of a millimeter, the size range of a virus, synthetic nanomaterials are anticipated to be the next milestone in medical technology. Particles of this size are capable to maneuver well within the human body while escaping removal by the kidney. Be it the “magic bullet” drug or the construction of “nano-machines”, the primary limitation is the capability for scientists to manipulate material shapes within this size regime. Without a framework to customize and control the structure, these frontiers can rapidly reach a developmental bottleneck.

Using DNA as a mold and dopamine/poly(ethylene glycol) as the material, scientists of the MPI-P have developed a technology to fabricate different polymeric shapes at a resolution that was deemed exceedingly difficult in nanotechnology. The nontoxic poly(ethylene glycol) is already widely used in cosmetics or medical applications, and dopamine is a neurotransmitter naturally found in the human body. Using these biocompatible components, a prototype to print both 2D and 3D polymeric nanoparticles with different patterns has become possible.

The scientists derived the technique from DNA origami, a method which weaves strands of DNA into distinct shapes. They created rectangular sheets of DNA measuring 100 nm by 70 nm and added molecular anchors that act as seeds for polymers to grow. As these anchors can be aligned in any pattern on the DNA sheet, the shape of the polymer growth can be imprinted based on the arrangement. As a proof of concept, polymer structures like lines and crosses were molded from the DNA/anchor positions on the origami and were released from the mold in the final step.

Using this technology as a basis, the scientists went a step further by rolling the DNA rectangle into a tube, making the positioning of the anchors possible in 3D. Using this tube model, they patterned the inner contour with polydopamine while decorating the outer surface with poly(ethylene glycol) in a stepwise process. In this way, they have demonstrated that the inner and outer features of the tube can be customized independently, giving rise to a true 3D engineering capability to manufacture precision components for nano-machines.

In the future, the scientists plan to work with experts in the medical field to fill drugs into these synthetic nanoshapes, whereby depending on the shape, each transports differently in the human body. The aim is to understand and apply the influence of shape and position of biologically active molecules to create a new generation of nanomedicine.

About David Ng
David Ng was born in Singapore. He studied Chemistry at the National University of Singapore and obtained a first class honours B.Sc. degree. Subsequently, he completed his Dr. rer. nat. with summa cum laude in 2014 under the guidance of Prof. Tanja Weil funded by both Ulm University and MPI-P. After a short stint at the Ulm University as a junior group leader, he moved to the MPI-P in 2016 as a group leader in the division of Synthesis of Macromolecules. In 2019, he is featured as one of the emerging “key figures that will shape the future of research at the interface of chemistry and biology” in the ChemBioTalents issue (Wiley VCH).