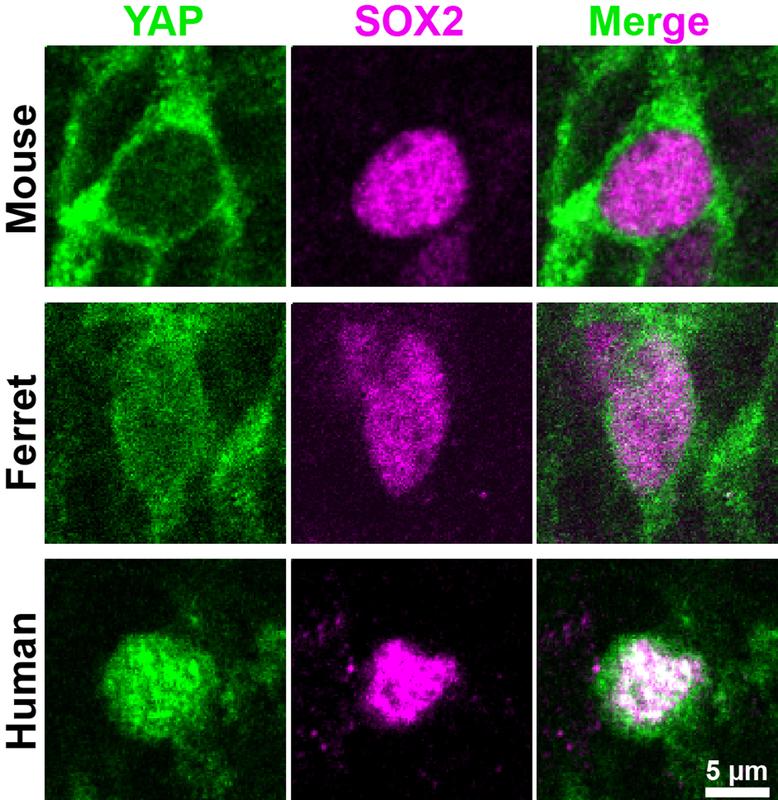 The YAP protein of the Hippo pathway is a necessary and sufficient factor for the expansion of the neocortex.

How the size of our organs is controlled, is one of the "big" questions of current biomedial research. This is true, in particular, for the human brain and its most striking part, the neocortex, which expanded greatly during human evolution. It is the neocortex that enables us to speak, think, or dream. A molecular machinery known to regulate organ size is the Hippo signaling pathway, which can promote cell proliferation. Amazingly, however, a potential role of Hippo signaling in the evolutionary expansion of the neocortex had not been investigated. Researchers at the Max Planck Institute of Molecular Cell Biology and Genetics (MPI-CBG) in Dresden have now addressed this. They examined the activity of the Hippo pathway in a specific class of neural progenitor cells, called basal progenitors, which are thought to be a key driver of neocortex expansion. Comparison of neocortex development in three mammalian species including human revealed that the protein YAP, a major player in the Hippo pathway, is necessary and sufficient for the higher levels of basal progenitor proliferation that underlie the increased neuron production characteristic of neocortex expansion. The researchers published their findings in the journal Cell Reports.

What underlies the expansion of the brain during mammalian evolution, up to human? The research group of Wieland Huttner at the MPI-CBG has been investigating this question for many years now. However, while he and his team previously identified a limited number of factors, an overarching molecular player has been missing. In search of such a player, the researchers now compared neocortex development in the mouse, whose neocortex is not expanded, in the ferret, a carnivore whose neocortex is moderately expanded, and in human with our massively expanded neocortex. To study these brain tissues, the researchers from the MPI-CBG worked together with colleagues in Japan and at the University Hospital Carl Gustav Carus in Dresden. To their delight, they could identify the long sought-after overarching molecular player, the protein YAP of the Hippo signaling pathway. This pathway is well known to promote bigger organs outside the central nervous system, but – surprisingly – it had never been examined if Hippo signaling, and notably YAP, has a role in the expansion of the brain, and specifically the neocortex. Milos Kostic, the first author of the study, explains: “We found that the levels and the activity of YAP are high in the basal progenitor cells of embryonic ferret and fetal human neocortex, but low in embryonic mouse basal progenitors. This was very interesting for us, because this meant that in these species YAP activity correlated with the proliferative capacity of basal progenitors, a key factor for neocortex expansion. Moreover, when we interfered with YAP activity in developing human and ferret neocortex, basal progenitor proliferation was reduced. Conversely, when we elevated YAP activity in embryonic mouse neocortex, basal progenitor proliferation was increased and more neurons were generated, a typical sign of neocortex expansion.”

This study advances our understanding of neural progenitor activity during brain development and its differences between different mammals. Wieland Huttner emphasizes: “Our results suggest that YAP activity likely was a major contributor to the evolutionary expansion of the mammalian, and notably the human, brain.”