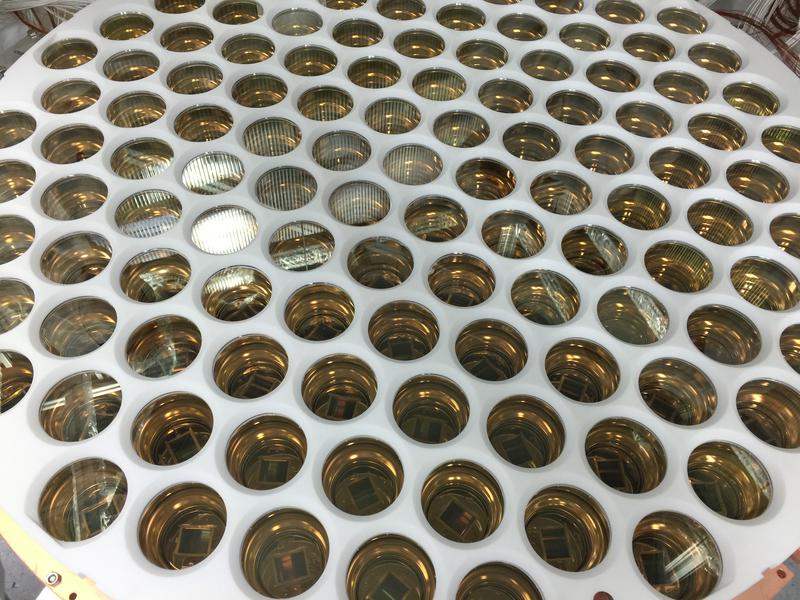 The photodetectors of the inner detecor of XENON1T were tested in liquid xenon in the UZH laboratory. | Quelle: (Image: Xenon Collaboration) | Download 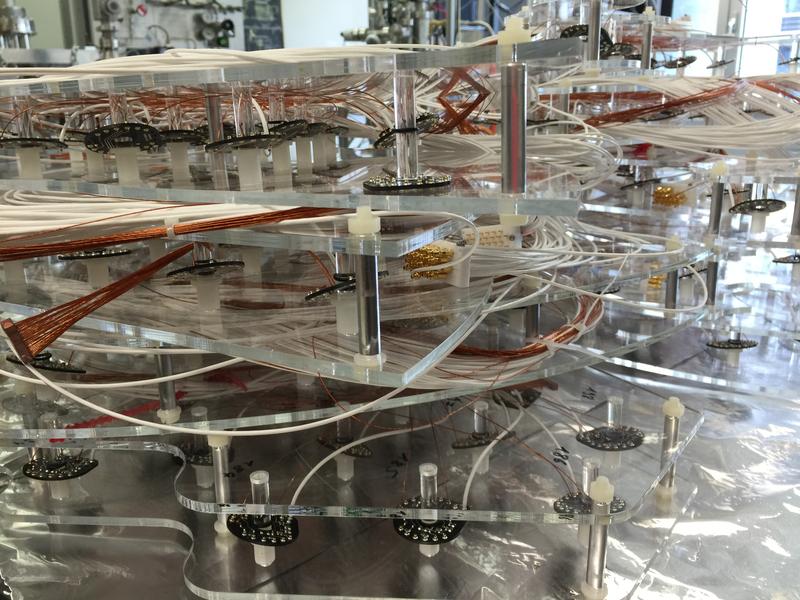 The electronics to select the photodetectors were developed and built at the UZH. | Quelle: (Image: Xenon Collaboration) | Download
❮ ❯

The XENON1T detector is mainly used to detect dark matter particles deep underground. But a research team led by Zurich physicists, among others, has now managed to observe an extremely rare process using the detector - the decay of the Xenon-124 atom, which has an enormously long half-life of 1.8 x 10 high 22 years.

Around 1500 meters deep in the Italian Gran Sasso mountains is the underground laboratory LNGS (Laboratori Nazionali del Gran Sasso), in which scientists search for dark matter particles in a lab sealed off from any radioactivity interference. Their tool is the XENON1T detector, the central part of which consists of a cylindrical tank of about one meter in length filled with 3200 kilograms of liquid xenon at a temperature of -95 degrees Celsius.

The rarest decay process ever measured

Until now, researchers using this detector have not yet observed any dark matter particles, but they have now managed to observe the decay of the Xenon-124 atom for the first time. The half-life time measured - i.e. the time span after which half of the radioactive atoms originally present in a sample have decayed away - is over a trillion times longer than the age of the universe, which is almost 14 billion years old. The observed process is therefore the rarest process in the universe ever to be directly seen happening in a detector. "The fact that we managed to directly observe this process demonstrates how powerful our detection method actually is - also for rare physical phenomena which are not from dark matter," says Professor Laura Baudis, astroparticle physicist at the University of Zurich, who is one of the leading scientists on the XENON1T experiment.

A phenomenon that is hard to demonstrate

The observed process is called a double electron capture: The atomic nucleus of Xenon-124 consists of 54 positively charged protons and 70 neutral neutrons, which are surrounded by several atomic shells occupied by negatively charged electrons. In double electron capture, two protons in the nucleus simultaneously "catch" two electrons from the innermost atomic shell, transform into two neutrons, and emit two neutrinos. As two electrons are then missing in the atomic shell, the other electrons reorganize themselves, with the energy released being carried away by X-rays. However, this is a very rare process which is usually hidden by signals from the omnipresent "normal" radioactivity - in the sealed-off environment of the underground laboratory, however, it has now been possible to observe the process.

The X-rays from the double electron capture produced an initial light signal as well as free electrons in the liquid xenon of the XENON1T detector. The electrons were moved toward the upper part of the detector where they generated a second light signal. From the direction and the time difference between the two signals, the researchers could determine the exact position of the double electron capture and the energy released during the decay. From the 126 processes observed in total over the last two years, the physicists calculated the enormously long half-life of 1.8 x 10 high 22 years for the atom Xenon-124. That is the slowest process ever measured directly.

"The new results show how well the XENON1T detector can detect very rare processes and reject background signals," says Laura Baudis. While two neutrinos are emitted in the double electron capture process, scientists can now also search for the so-called neutrino-less double electron capture which could shed light on important questions regarding the nature of neutrinos.

With the XENON1T detector, physicists originally wanted to detect dark matter particles. Theoretical considerations predict that dark matter should very rarely "collide" with a xenon atom in the tank of the detector which is filled with liquid xenon. It thereby transfers energy to the atomic nucleus which subsequently excites other xenon atoms and causes them to emit light. These very faint signals of ultraviolet light and the minute amount of electrical charge which is released by the collision process are detected by means of sensitive light sensors. The detector was switched off for upgrading in 2018: The three times larger active detector mass along with further modifications will boost the new XENONnT detector's sensitivity considerably.

The XENON1T detector is an international project involving around 160 researchers. In Switzerland the experiment receives funding from the SNSF and the University of Zurich. International support comes from Germany, the USA, Italy, Israel, Portugal, France, Sweden, the Netherlands and from the European Union.

25.04.2019 15:20
Prof. Laura Baudis
Department of Physics
University of Zurich
Phone: +41 44 635 57 77
E-mail: lbaudis@physik.uzh.ch
The study to which this press release refers was led by the research group led researchers at the University of Münster (Germany) headed by Prof. Christian Weinheimer.

XENON1T is a joint experimental project of about 160 scientists from Europe, the US and the Middle East. From Germany, the Max Planck Institute for Nuclear Physics in Heidelberg and the Universities of Münster, Freiburg and Mainz make key contributions.