An election assistance for Europe 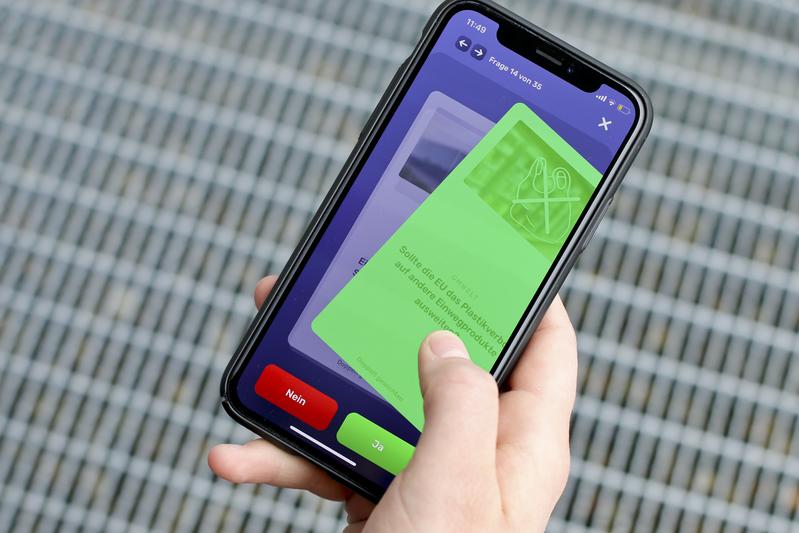 Should the euro be abolished as a common currency? Should there be a financial transaction tax in the EU? Should Germany support a Europe-wide ban on glyphosate? Starting today, April 26, 2019, a total of 35 such questions relating to Europe can be answered with the "VoteSwiper", already known in Germany as the "WahlSwiper".

The online election assistance tool for the European elections will initially be available from May 23-26, 2019 in Germany and Austria. It is intended to help voters make their decision during the European elections. Above all, the "VoteSwiper" also provides information on the most important issues of European policy and their parties' positions in the individual countries. The app will be launched in a total of 13 countries. Matthias Bannert from the Berlin-based agency Movact and Prof. Dr. Uwe Wagschal from the Department of Political Science at the University of Freiburg were in charge of developing the "VoteSwiper" for the European elections. Teams in the respective countries offered their support in developing the questions, including an Austrian team at the University of Salzburg headed by European experts Prof. Dr. Michael Blauberger and Prof. Dr. Eric Miklin.

In Germany, 28 political parties answered the questions on the VoteSwiper. In Austria, all seven parties are due to be elected on May 26th. The answers from the remaining EU countries, including France, Sweden, Finland, Hungary and Italy, will follow on May 9th. All participating countries will be asked 30 identical and five country-specific, but Europe-relevant questions. One such question for Germany is: “Should the German government support the implementation of the Nord Stream 2 pipeline at European level?” One question that is hotly debated in Austria is: “Should German-speaking South Tyroleans also be able to obtain Austrian citizenship?”

The questions are formulated in the respective national language. In addition, all questions are available in German, English and French. In this way, participants can test which party they would choose in another country. The "VoteSwiper" is available as an app for smartphones, tablets and Apple TV as well as a web app for desktop devices. It is available free of charge to the media of all EU member states.

With the "VoteSwiper", users receive an easy-to-use app for the European elections in which they simply have to "swipe" with their finger to the left or right when asking questions, says Wagschal. In the end, the user receives a percentage match for all parties. Further information, such as the reasons given by the parties to the questions, can be read easily. In the run-up to the 2017 Bundestag elections, the app was developed as a "VoteSwiper" and was also used in all subsequent state elections. This year, the Berlin agency Movact received the "German Design Award 2019" for the application.

Link to the app:
https://www.voteswiper.org