How to generate a brain of correct size and composition 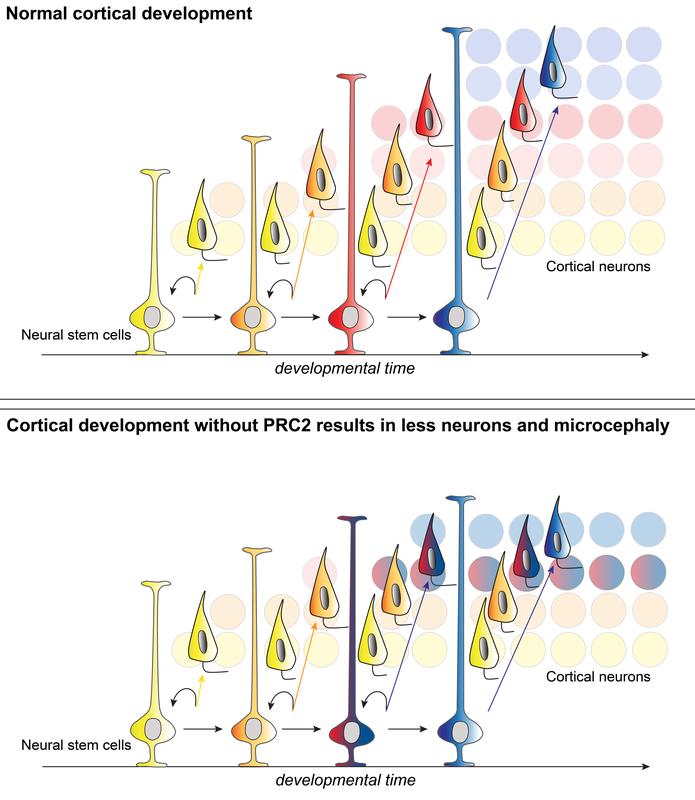 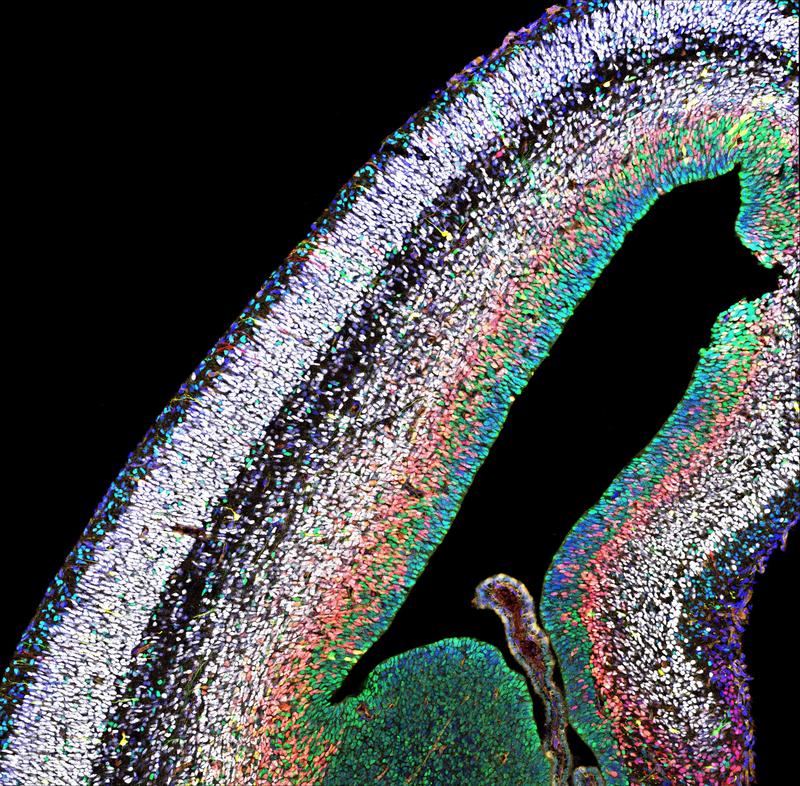 To build the neocortex, a brain area involved in higher cognitive functions, stem cells produce billions of neurons of various types. In a Science study, neuroscientists from Switzerland, Belgium, and the Institute of Science and Technology Austria (IST Austria) have now shown that, over time, the neocortical stem cells go through various maturation states, each of them leading to a distinct neuron type. Production of the correct neuron type is bound to a specific protein complex.

With its deep grooves and ridges, the neocortex has coined our notion of the human brain. Only a few millimeters thick, this outer cerebral layer contains way over 15 billion neurons and processes information in order for us to consciously experience and perceive the world. Obviously, if anything goes wrong during neocortex development in the embryo, serious malfunctions associated with neurodevelopmental and psychiatric disorders including autism or schizophrenia may occur. However, how the cerebral cortex is built from neural stem cells during development is not fully understood. Together with the IST Austria research group of Professor Simon Hippenmeyer, researchers around Denis Jabaudon from the University of Geneva, Switzerland, and Laurent Nguyen from the University of Liège, Belgium, have now made a major step towards understanding how cortical stem cells manage to generate the huge number of neurons of various type and function that make up for adult neuronal diversity.

Time as an essential aspect of neuron identity

The new study presents evidence that developing neural stem cells are equipped with specific gene expression (transcriptional) programs at different points in time. While the stem cells progress sequentially through distinct stages, they pass these transcriptional “fingerprints” on to their daughter cells, i.e., the neurons they produce. Strikingly, the stem cells appear to have different properties and gene expression at different stages during neocortical development: At early stages, stem cells tend to be equipped with programs regulating primarily internal cellular processes such as cell-cycle control. In contrast, during later stages, stem cells hold gene expression programs that increasingly require external signals and thus environmental interaction.

The researchers suspected that specific regulatory proteins could be involved in the control of the time-dependent activation of distinct gene expression programs. They identified a protein complex, the so-called Polycomb Repressive Complex 2 (PRC2) to be highly expressed only in early-stage stem cells, but not in late-stage ones. The question, whether PRC2 does indeed regulate temporal maturation of stem cells could only be answered in a collaboration of the Swiss and researchers with Simon Hippenmeyer and postdoc Nicole Amberg from IST Austria. By using mouse genetic approaches the IST Austria researchers succeeded in eliminating all PRC2 activity in cortical stem cells during development, i.e., at the time when distinct neuron types are being produced—and the results proved their hypothesis right.

The PRC2 inactivation had drastic consequences in a way that stem cells were unable to follow their normal path of maturation. In the absence of PRC2, stem cells seemed to mature too fast and thus produced wrong types of neurons during false time windows. Even more dramatic, the overall number of neurons produced was also drastically reduced. This resulted in a small cortex, also known as microcephaly, with an incorrect neuronal cell type composition. Nicole Amberg, who was recently awarded an FWF Hertha-Firnberg Fellowship: “The results illustrate how sensitive brain development is. We now have a clearer picture of how neural stem cells produce the right type and number of neurons during cortical development, which could help to better understand the underlying mechanisms of human brain malformation and neurodevelopmental disorders in general.”

The Institute of Science and Technology (IST Austria) is a PhD-granting research institution located in Klosterneuburg, 18 km from the center of Vienna, Austria. Inaugurated in 2009, the Institute is dedicated to basic research in the natural and mathematical sciences. IST Austria employs professors on a tenure-track system, postdoctoral fellows, and doctoral students. While dedicated to the principle of curiosity-driven research, the Institute owns the rights to all scientific discoveries and is committed to promote their use. The first president of IST Austria is Thomas A. Henzinger, a leading computer scientist and former professor at the University of California in Berkeley, USA, and the EPFL in Lausanne, Switzerland. The graduate school of IST Austria offers fully-funded PhD positions to highly qualified candidates with a bachelor's or master's degree in biology, neuroscience, mathematics, computer science, physics, and related areas. www.ist.ac.at

Understanding the development of the neocortex is only possible by studying the brains of animals. Currently, no other methods are available to serve as alternatives. In this study, mice were used as model organisms. The animals were raised, kept and treated according to the strict regulations of Austrian law.