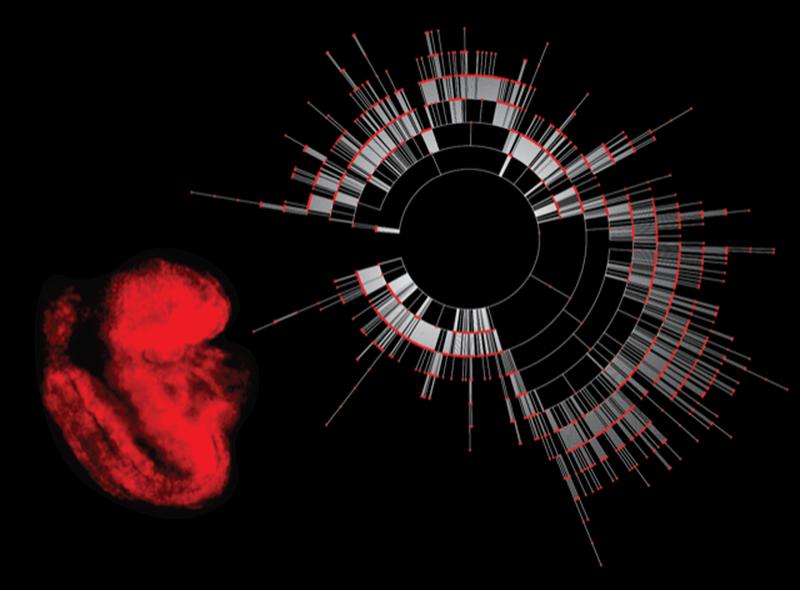 The beginning of new life starts with a fascinating process: A single cell gives rise to progenitor cells that eventually differentiate into the three germ layers. Out of these, the different tissues, organs and body parts of the new organism are formed. But what ensures that this process really results in cells with different functions, which, in addition, end up at the right place in the growing organism? This is what Alexander Meissner from the Max Planck Institute for Molecular Genetics in Berlin is interested in. Together with scientists from San Francisco, his team has developed a molecular recorder that can trace the lineage of individual cells back to their progenitors. The recorder was introduced into the fertilized egg and has been passed on to all subsequent cells. Cells that contain the recorder accumulate continuously random mutations and pass these on to their daughter cells, which, in addition, acquire new ones. The mutations do not affect the function of the cells, but leave a characteristic pattern in their genome. This can then be used to trace back the lineage of the cells. By combined analysis of lineage and function of the individual cells, a cell fate map can be created, which gives insights into fundamental developmental processes.

Embryonic development starts with the fusion of oocyte and sperm cell. They form a single fertilized cell that eventually gives rise to a complex, multicellular organism. While the fertilized oocyte is totipotent, which means it can develop all tissues and organs of the embryo as well as the placenta, the daughter cells lose this ability more and more and differentiate into certain directions. During the first third of embryonic development, the so-called embryogenesis, the germ layers are formed. These are three primary layers of cells, which later give rise to all organs and tissues of the organism. The mechanisms that control embryogenesis and coordinate cell differentiation are very complex, especially in mammals, because it starts with the formation of many identical cells, before they begin to develop different functions.

In order to better understand the biological processes that control embryonic development, Alexander Meissner and his team at Harvard University in Boston and the at the Max Planck Institute for Molecular Genetics in Berlin together with colleagues from the University of California, San Francisco, designed a molecular recording system, capable to record the development of cells during embryogenesis on the molecular level, so that it can be read out later.

Integration of gene scissors CRISPR/Cas 9 into the cells

The scientists used the CRISPR/Cas9 system for their molecular recorder. In this system, often referred to as gene scissors, the enzyme Cas9, which is able to cut DNA, binds to a short ribonucleic acid (RNA). The RNA in turn binds to a piece of target DNA in the genome, thus bringing Cas9 into close proximity of the bound DNA. Cas9 cuts the DNA at the target DNA and creates a double strand break that gets repaired by cellular mechanisms afterwards. However, this repair process is error-prone, often resulting in loss of DNA fragments or insertion of additional fragments. This often leads to genomic mutations at this position, which are passed on to the subsequent daughter cells.

Meissner and colleagues artificially fertilized mouse oocytes and, at the same time, transferred the components of the CRISPR / Cas9 system to the cells. An additional DNA sequence has been inserted and served as target region for the mutations, so that they do not interrupt the natural functions of the cell. Each cell produces the components of the CRISPR/Cas9 system itself and continuously generates DNA mutations, which are inherited with each cell division. Independently from each other, additional mutations are produced randomly in each daughter cell and differentiate them from one another. Thus, each cell gets its unique, individual mutation pattern, similar to a molecular barcode, which makes it unmistakable. Because daughter cells always inherit the mutations of the parent generation and recruit additional mutations to them individually, the system can record the accumulation of different mutations per cell division like a molecular recorder. By incorporating a variety of target DNAs and three different guide RNAs that bring the Cas9 to the target, the scientists managed to expand the molecular recorder, so that it could store a wide variety of different mutations over a long period of time. "This is especially relevant to be able to follow the complex mammalian development over a longer period of time," explains Meissner.

Molecular recorder can trace back lineage of cells

Meissner and his team together with their colleagues in San Francisco analyzed the cells of mouse embryos at the age of 8.5-9.5 days, to which the molecular recorder had been transferred at fertilization. Using the accumulated mutations, the scientists were able to trace the development of cells from the first totipotent progenitor cells to the three germ layers that had already formed then. At the same time they created a so-called RNA transcription profile of the individual cells. This shows which part of the DNA of each cell is translated into RNA or proteins, thereby giving the researchers clues as to what function the cell might have. "Typically, similar functions of cells indicate a common ancestry," says Meissner. However, the molecular recorder also identified cells with a similar transcription profile that derived from different cells.

Using the molecular recording system, early embryonic development can be accurately traced to their origins. This opens up new ways to specifically address previously opaque questions in embryonic development. "In addition, the tool can also be targeted to different types of cells at a later stage of development," says Meissner. "This way, we hope to gain new insights on various cellular mechanisms, for example, how cells communicate, sense signals and coordinate regeneration in certain contexts."