Interview with the Nobel Prize Winner in Chemistry, Frances Arnold: “Enzymes are everywhere” 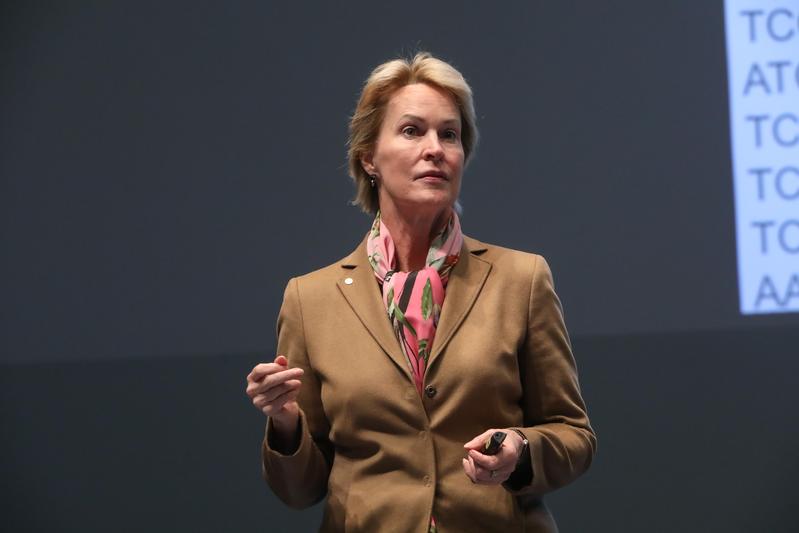 The Nobel Prize Winner in Chemistry, Frances Arnold, is considered to be a pioneer in the field of directed evolution. In an interview with the Office of University Communications of TU Dortmund University, Ms. Arnold explained how she breeds enzymes that do not occur naturally and how the human race can benefit from her research.

In a few words: What is it that you do as a scientist?
Frances Arnold: I breed molecules, proteins and enzymes like people breed cats and dogs.

Could you explain shortly what directed evolution is?
Frances Arnold: Directed evolution means artificial selection applied to the DNA that encodes interesting molecules like proteins. So I breed them by deciding how to recombine the DNA, how to mutate the DNA, and then who goes on to parent the next generation.

How can your research be used for everyday life?
Frances Arnold: This is useful for solving all sorts of interesting problems in chemistry. Enzymes catalyze reactions; they make one form of material turn into another form. And they do it cleanly, sustainably; they use cheap renewable materials to make things that we find useful in our lives. They reduce energy, they reduce waste. There are also advantages of using enzymes in laundry detergents; they take stains off of clothes at low temperature. There are enzymes used in cosmetics, textiles, wine and beer making – enzymes are everywhere!

How did you find your way into the field of chemical engineering, bioengineering and biochemistry? What is it that you found fascinating and interesting about it in the first place?
Frances Arnold: I didn’t choose this field in the beginning; I came into it on a zig-zag path. My first degree was in mechanical and aerospace engineering. I worked in the solar energy arena after the oil crises in the 1970s. But political forces in the United States made solar energy not very attractive for the future – that republican Reagan administration was not interested in solar energy – so I went into chemical engineering. A lucky pivot, because that was the beginning of the DNA revolution. I studied enzymes for the first time when I was 25, 26 years old, and I fell in love with them – and decided I wanted to become an engineer of the biological world.

Could you tell us what you are working on at the moment?
Frances Arnold: For example, using enzymes to catalyze reactions not even known in nature, that neither a human nor the biological world has been able to catalyze. I really enjoy training enzymes to do new chemistry and seeing how quickly they can learn how to do completely new chemistry.

If we look into the future: What will directed evolution be able to do in five or ten years’ time?
Frances Arnold: I hope that people will use it to invent new biological processes that can replace toxic chemical processes.

You have worked for the “Science & Entertainment Exchange” program of the National Academy of Sciences. Could you tell us a bit about that?
Frances Arnold: That’s a volunteer organization. I live in Los Angeles, and that’s the center of the entertainment industry. What we’d like to do is see science and scientists portrayed in a realistic and positive way in entertainment. Because that reaches a lot of people, has a big influence on young people. We hope that science will be portrayed in a way that makes it attractive to learn science.

So it’s like an advisory board for filmmakers?
Frances Arnold: It’s anything that screenwriters want to know about. For example if a screenwriter wants to know whether this synthetic biology project is at all feasible, they can come to Caltech [California Institute of Technology], talk to my graduate students and get an idea of what seems realistic versus what is just a complete fairy tale.

You are only the fifth woman to win the Nobel Prize in Chemistry. What is your piece of advice for young women who want to be researchers?
Frances Arnold: Do it!

On Frances Arnold: Frances Arnold is the Linus Pauling professor of Chemical Engineering, Bioengineering and Biochemistry at the California Institute of Technology. She was awarded the Nobel Prize in Chemistry in 2018 for her research on directed evolution. She was honored for her work in the field of enzyme research. Enzymes start and speed up chemical reactions and are used in the production of chemicals of all kinds, such as fertilizers or medication.