As hot as the Sun’s interior 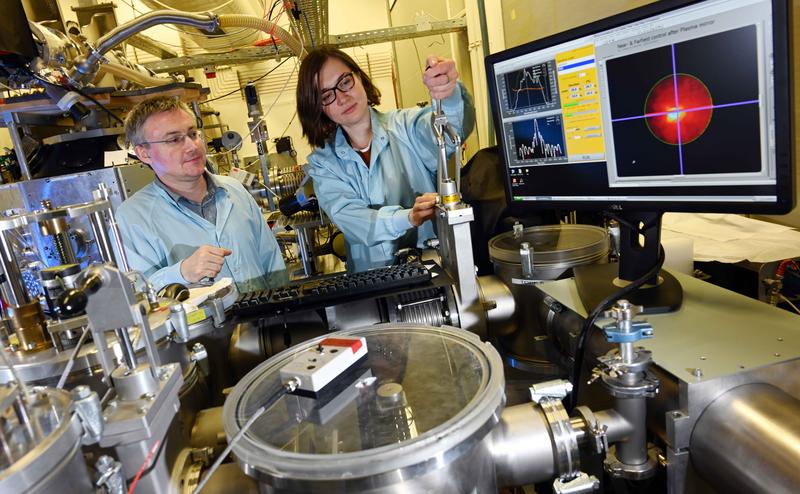 The three classic physical states – solid, liquid and gaseous – can be observed in any normal kitchen, for example when you bring an ice cube to the boil. But if you heat material even further, so that the atoms of a substance collide and the electrons separate from them, then another state is reached: plasma. More than 99 per cent of material in space is present in this form, inside stars for instance. It is therefore no wonder that physicists are keen to study such material. Unfortunately, creating and studying plasmas on Earth using the high temperature and pressure that exist inside stars is extremely challenging for various reasons. Physicists at Friedrich Schiller University Jena have now managed to solve some of these problems, and they have reported on their results in the renowned research journal ‘Physical Review X’.

“To heat material in such a way that plasma is formed, we need correspondingly high energy. We generally use light in the form of a large laser to do this,” explains Christian Spielmann of the University of Jena. “However, this light has to be very short-pulsed, so that the material does not immediately expand when it has reached the appropriate temperature, but holds together as dense plasma for a brief period.” There is a problem with this experimental setup, though: “When the laser beam hits the sample, plasma is created. However, it almost immediately starts to act like a mirror and reflects a large part of the incoming energy, which therefore fails to penetrate the matter fully. The longer the wavelength of the laser pulse, the more critical the problem,” says Zhanna Samsonova, who played a leading role in the project.

To avoid this mirror effect, the researchers in Jena used samples made of silicon wires. The diameter of such wires – a few hundred nanometres – is smaller than the wavelength of around four micrometres of the incoming light. “We were the first to use a laser with such a long wavelength for the creation of plasma,” says Spielmann. “The light penetrates between the wires in the sample and heats them from all sides, so that for a few picoseconds, a significantly larger volume of plasma is created than if the laser is reflected. Around 70 per cent of the energy manages to penetrate the sample.” Furthermore, thanks to the short laser pulses, the heated material exists slightly longer before it expands. Finally, using X-ray spectroscopy, researchers can retrieve valuable information about the state of the material.

Maximum values for temperature and density

“With our method, it is possible to achieve new maximum values for temperature and density in a laboratory,” says Spielmann. With a temperature of around 10 million Kelvin, the plasma is far hotter than material on the surface of the Sun, for example. Spielmann also mentions the cooperation partners in the project. For the laser experiments, the Jena scientists used a facility at the Vienna University of Technology; the samples come from the National Metrology Institute of Germany in Braunschweig; and computer simulations for confirming the findings come from colleagues in Darmstadt and Düsseldorf.

The Jena team’s results are a ground-breaking success, offering a completely new approach to plasma research. Theories on the state of plasma can be verified through experiments and subsequent computer simulations. This will enable researchers to understand cosmological processes better. In addition, the scientists are carrying out valuable preparatory work for the installation of large-scale apparatus. For example, the international particle accelerator, ‘Facility for Antiproton and Ion Research’ (FAIR), is currently being set up in Darmstadt and should become operational around 2025. Thanks to the new information, it will be possible to select specific areas that merit closer examination look.