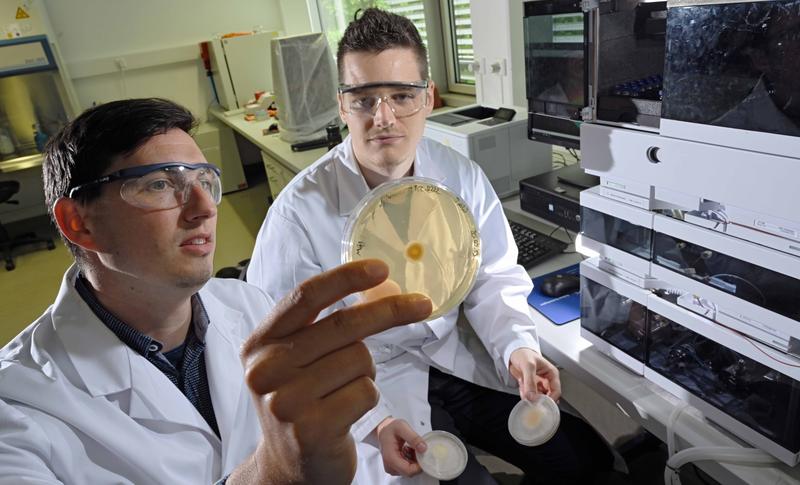 Mortierella alpina lives in the soil and likes to keep cool. This fungus, which belongs to the zygomycetes, grows best at temperatures of 10 to 15°C and occurs mainly in alpine or arctic habitats. In biotechnology, the fungus has been used for the large-scale production of polyunsaturated fatty acids such as arachidonic acids, mainly used as a dietary supplement in baby foods. But M. alpina can do much more: a research team from the Institute of Pharmacy at Friedrich Schiller University Jena, has discovered that this fungus also produces other interesting compounds. In the specialist journal ‘Organic Letters’, the researchers, led by Dr Markus Greßler, present a group of surface-active peptides – called malpinins –which are produced in large quantities by the fungus (DOI: 10.1021/acs.orglett.9b00193).

Surfactants are substances that are used in laundry detergents and washing up liquids. Florian Baldeweg, a Pharmacy PhD student and member of Greßler’s team, discovered the compounds produced by the fungus when he tried to purify peptides from Mortierella chromatographically. “Even very tiny amounts of malpinins form a head of foam on the top of the sample vial,” says Baldeweg.

Baldeweg and Greßler have elucidated the structure of these compounds. This previously unknown group of natural surfactants is called malpinins. Their surfactant effect is even stronger than that of SDS (sodium dodecyl sulphate), which is present in many common detergents.

However, the Jena researchers do not want to use the natural surfactants for developing new cleaning agents. “We want to test whether their properties could make the malpinins useful in pharmacology,” explains Greßler. This is because surfactants not only facilitate a mixture of oil and water. “Biological membranes, which mainly consist of fatty acids, could be made permeable to pharmaceutical drugs,” adds Greßler. This could allow pharmaceutical substances to be transported through cell membranes. Greßler and Baldeweg want to test the malpinins to determine their pharmaceutical potential, together with colleagues from the Institute of Pharmacy of Friedrich Schiller University who work with Prof. Dagmar Fischer.

The discovery of the natural products in M. alpina is also interesting because up to now, lower fungi such as the zygomycetes have received little attention as producers of secondary metabolites, unlike higher fungi such as Aspergillus species. Greßler expects that this will now change: “Studies on the genome of M. alpina have shown that the fungus can produce many more natural products, and the malpinins are just one small group of them.”