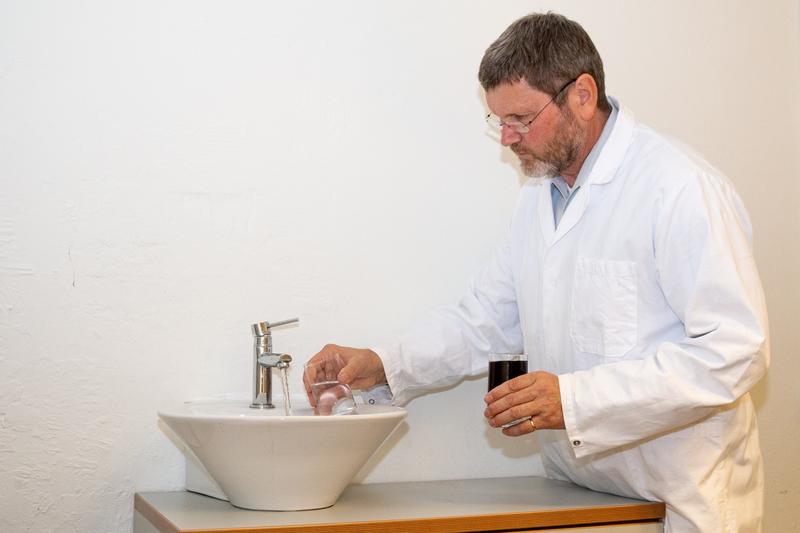 After having found gadolinium from contrast agents in many rivers worldwide and even in the tap water in some German cities, a research group headed by Michael Bau, Professor of Geoscience at Jacobs University Bremen, now also observed that these contrast agents enter the food chain. They detected the gadolinium in tap water and in cola soft drinks bought in restaurants of well-known fast food franchises in Berlin, Dresden, Düsseldorf, Essen, Karlsruhe, and Munich.

Gadolinium, which is widely used as a contrast agent in magnetic resonance imaging (MRI), appears not to impose any health risk at the low concentrations observed. However, it is an indicator for the potential presence of other waste water-derived, possibly toxic xenobiotics.

Contrast agents play an essential role in medical diagnostics and are used in ever increasing amounts. This is no different in the case of gadolinium, one of the rare earth elements, that is applied in MRI scans. Patients later excrete this contrast agent in the hospital or at home via their kidneys. With the sewage it eventually reaches local waste water treatment plants where the gadolinium contrast agent – similar to other pharmaceuticals – cannot be removed during waste water treatment. With the clearwater effluent from these treatment plants the gadolinium enters rivers and lakes, which has become a world-wide phenomenon, as Bau and his co-workers at Jacobs University Bremen have shown in numerous studies.

Rivers transport some of the gadolinium contrast agent to the sea where Bau and his group have already traced it in the southern North Sea. But as river water also feeds the ground water from which drinking water is sourced, the anthropogenic (“man-made“) gadolinium compounds can also be found in tap water. Expanding their previous studies on tap water in Berlin, Essen, Cologne and London, Michael Bau and his co-workers Katja Schmidt, Gila Merschel, and Nathalie Tepe now also observed the contrast agent in tap water from Bremen, Düsseldorf, Dresden, Karlsruhe and Munich.

The focus of the current study, which has just been published in the prestigious journal “Science of the Total Environment“, addresses the question whether the contrast agent enters the human food chain. Hence, in addition to local tap water, cola soft drinks bought at outlets of well-known fast food franchises in Berlin, Dresden, Düsseldorf, Essen, Karlsruhe, and Munich were analyzed for their rare earth element content. And the results are beyond any doubt: all soft drinks displayed high amounts of gadolinium due to the presence of the contrast agent.

For geochemist Michael Bau this is no surprise: “In such fast food restaurants, soft drinks are prepared on-site in so-called ‘post-mix soda fountains’ where concentrated cola syrup is mixed with CO2 and local tap water. Although the tap water is claimed to be treated and cleaned, this purification procedure apparently does not remove the gadolinium contrast agent.“

Even though the gadolinium should not impose any health risk at the low concentrations measured, it is an indicator for the potential presence of other waste water-derived substances in tap water or in drinks and food prepared with this water. ”Examples of such xenobiotics are so-called ‘endocrine disruptors’ which can affect the human hormone system even at very low concentration. And in contrast to the gadolinium, these endocrine disruptors may become a concern“, says Bau. He emphasizes, however, that instead of trying to eliminate the gadolinium, it should rather be welcomed as a convenient tracer for other waste water-derived substances that are more difficult and costly to analyze.

Gadolinium and the other rare earth elements belong to the group of “critical metals“ such as niobium, antimony, gallium or germanium, which are essential for modern high-technologies related to renewable energy, electro mobility, and digitalization, but for which there is no secure supply. While this has led to an intensified search for new mineral deposits and more research into recycling technology, only very little is known about the distribution and behavior of these metals in the environment. An integrated approach that considers both the resource and the environmental aspects of critical metals is a focus of work in the research group on Resource and Environmental Geochemistry, which belongs to the highly acclaimed Earth and Environmental Science program of Jacobs University Bremen.

Studying in an international community. Obtaining a qualification to work on responsible tasks in a digitized and globalized society. Learning, researching and teaching across academic disciplines and countries. Strengthening people and markets with innovative solutions and advanced training programs. This is what Jacobs University Bremen stands for. Established as a private, English-medium campus university in Germany in 2001, it is continuously achieving top results in national and international university rankings. Its more than 1,400 students come from more than 100 countries with around 80% having relocated to Germany for their studies. Jacobs University’s research projects are funded by the German Research Foundation or the EU Research and Innovation program as well as by globally leading companies.
For more information: www.jacobs-university.de
Facebook | Youtube | Twitter | Instagram | Weibo