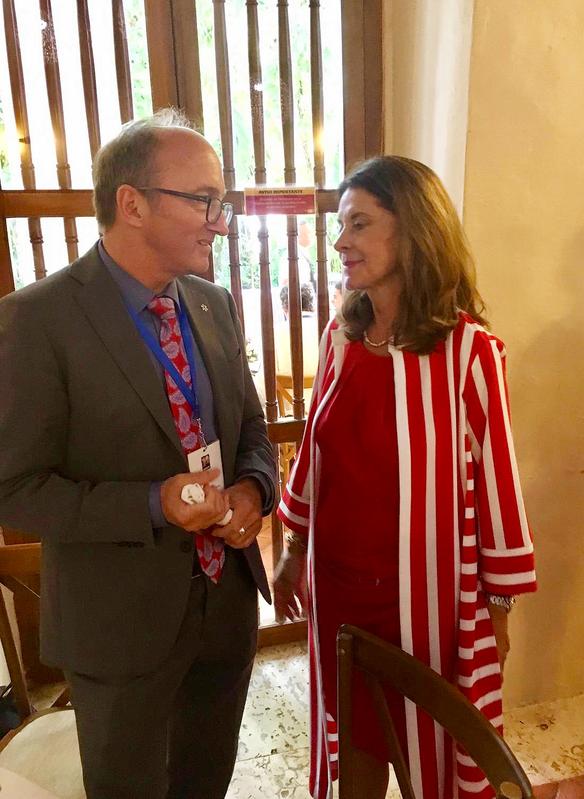 At the invitation of Martha Lucía Ramírez, Vice-President of Colombia, the Council of Wise Men (Misión Internacional de Sabios) met for its second Summit on 16-19 September 2019. The meeting of this elite group of nationally and internationally renowned scientists took place in the Center of the Spanish Consulate in Cartagena de Indias. Dr. Markus Eisenhauer from Fraunhofer FIT had been invited to take part as an expert for Industry 4.0 and Convergent Technologies, with a particular focus on establishing a research system according to the Fraunhofer model. The Council's task is to draw up a road map for the strategic promotion of science, technology and innovation in Colombia.

The Misión de Sabios consists of 47 members, including a Nobel laureate in physics, 16 women, international experts and some members of the previous misión in 1993/94. In eight thematic groups, they deal with eight topics that the government of Colombia has identified as priorities for the country's future. These are Social Sciences, Life Sciences, Biotechnology, Bio-economics and Environment, Ocean and Water Management, Basic Research and Space, Sustainable Energy, Convergent Technologies and Industry 4.0 as well as Creative Industries and Culture. Each group is supported by a Colombian university, which plays a fundamental role in coordinating the entire research process.

Some 200 leading representatives from industry, associations, government and authorities, as well as representatives of the relevant ministries also attended the Misión de Sabios Summit.

"Misión de Sabios opens the door to the development of territorial, productive and institutional instruments that provide practical solutions to the challenges of developing science, technology and innovation in the country. Therefore, the scientific or intellectual prestige of the invited participants and the respect they have earned in their scientific communities have been important criteria for the selection of participants," said Vice-President Marta Lucía Ramírez.

Dr. Markus Eisenhauer, head of the User-Centered Computing department of the Fraunhofer Institute for Applied Information Technology FIT, had been invited to the second Council of Wise Men Summit as a special guest on the subject of Industry 4.0. In his lecture, he also presented the Fraunhofer model of applied research for the direct benefit of industry.

"Colombia's ambitious goal of being among the top-ranking 25 countries in terms of gross domestic product can only be achieved if the academic and the business sectors work closely together. Furthermore, it is important to have a solid technical infrastructure so that research and industry can be networked smoothly. Better access to education for all sections of the population is also fundamental," Dr. Eisenhauer said in summarizing his presentation.