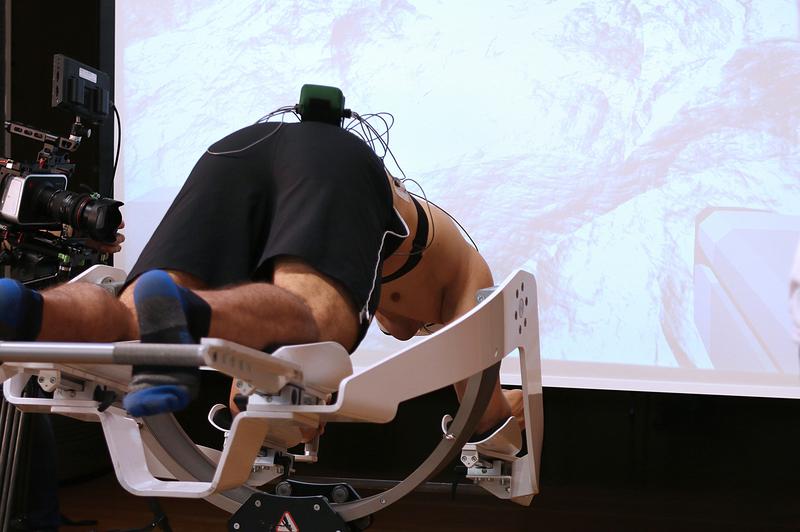 The test subjects flew over virtual mountain ranges and were expected to navigate through 63 rings, which required a change in their centre of gravity. | Download 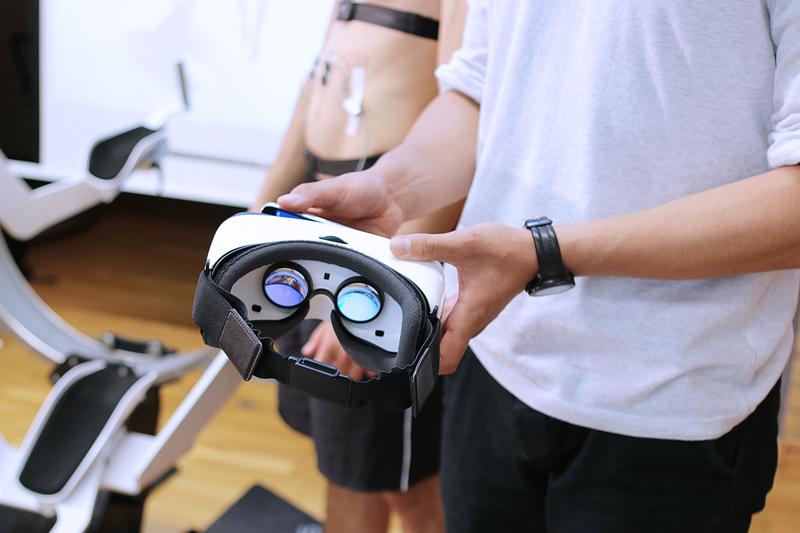 VR glasses and a large screen give the user a real sense of flying. | Download
❮ ❯

The German Sport University carried out research to see whether full-body exergaming in virtual reality can be appropriately applied for training and therapy purposes.

Epidemiological studies show significant correlations between periods spent sitting and the prevalence of chronic diseases. This also applies to children and adolescents. One of the major obstacles to people taking up physical exercise is a lack of motivation. The solution could be Icaros: a flight simulator with exergaming technology that promises the user an element of fun while at the same time keeping fit.

Icaros is a training device that turns the core ‘plank’ muscle exercise into a more dynamic one by making it mobile. The user lies horizontally in a prone position with forearm support on a motion platform specially equipped with movement sensors that are able to detect any changes in the user’s direction and translate them into virtual reality (VR). VR glasses and a large screen give the user a real sense of flying. According to scientist Dr. Boris Feodoroff, head of the study at the Institute of Movement Therapy and Movement-oriented Prevention and Rehabilitation, "Ideally, Icaros can be used in prevention and rehabilitation, because in both prevention and therapy it is the quality of movement which plays an essential part in effective strength training and benefits overall health."

His team chose 33 test subjects, all male, all under 30 years of age, BMI under 25, between 170 and 190 cm tall. Each was allowed to fly twice for a period of five minutes. The aim was to find what effects VR-based training has on their cardiovascular system, and what potential it offers for effective strength endurance training. Additional attention was placed on cyber disease symptoms (motion sickness), perceived exertion, and the subjects' entertainment factor.

The test subjects flew over virtual mountain ranges and were expected to navigate through 63 rings, which required a change in their centre of gravity. After the flights, each was given a questionnaire and asked

to describe any mental, physical and emotional stress they experienced. During the simulation, heart rate, muscle activity and device movement were continuously recorded. Eight participants had to stop the experiment due to signs of nausea or discomfort, indicating motion sickness.

Results of the remaining test subjects’ evaluations show that the participants found the flights very pleasant but at the same time physically very strenuous. The dorsal muscle chain (neck, shoulder, back) was activated, indicating that torso strength training would be a possibility. The average activity of all the other muscle groups recorded was less than 30 percent, causing only a mobilisation of the muscles, while the heart rate remained within a low aerobic intensity level (maximum 110 bpm). Icaros seems to offer little to no cardiovascular benefit compared to conventional training. “Future full-body concepts should concentrate on increasing dynamic muscle activation," Feodoroff concludes. The most important finding of the Icaros experiment, however, is that the new training system does create incentives for increased physical activity. Everyone longs to fly and this could be the motivation that gets people moving. According to Feodoroff, “Motivating the public to take up physical exercise is probably one of the most important challenges in the health sector. The added gaming aspect of physical activity not only contributes to increased motivation for being active, but also promotes social contact and interaction."