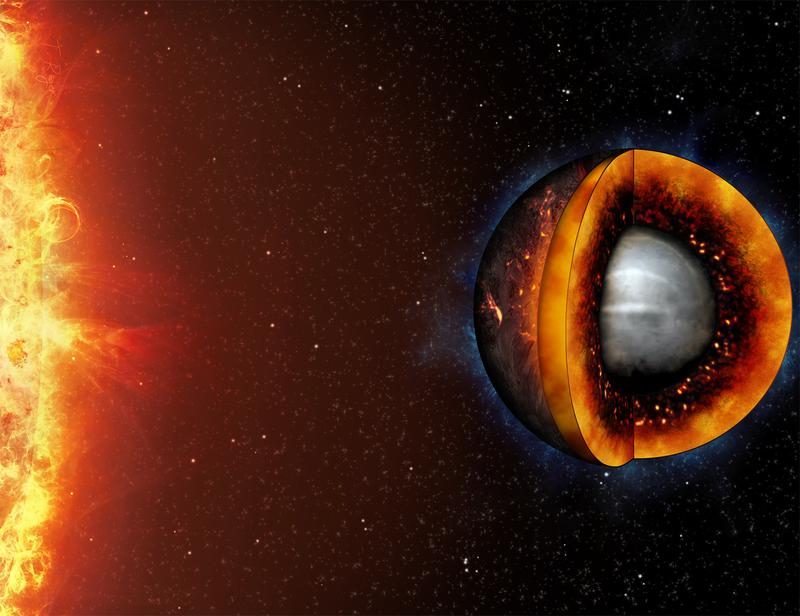 A hot, molten Earth would be around 5% larger than its solid counterpart. This is the result of a study led by researchers at the University of Bern. The difference between molten and solid rocky planets is important for the search of Earth-like worlds beyond our Solar System and the understanding of Earth itself.

Rocky exoplanets that are around Earth-size are comparatively small, which makes them incredibly difficult to detect and characterise using telescopes. What are the optimal conditions to find such small planets that linger in the darkness? “A rocky planet that is hot, molten, and possibly harboring a large outgassed atmosphere ticks all the boxes,” says Dan Bower, astrophysicist at the Center for Space and Habitability (CSH) of the University of Bern. Such a planet could be more easily seen by telescopes due to strong outgoing radiation than its solid counterpart. The SNSF Ambizione and CSH Fellow continues: “Granted, you wouldn’t want to vacation on one of these planets, but they are important to study since many if not all rocky planets begin their life as molten blobs, yet eventually some may become habitable like Earth.

Rocky planets are built from the leftovers of the leftovers. “Everything that doesn’t make its way into the central star or a giant planet has the potential to end up forming a much smaller terrestrial planet,” says Bower: “We have reason to believe that processes occurring during the baby years of a planet’s life are fundamental in determining its life path.” Therefore, Bower and a team of post-docs - dominantly from within the PlanetS network - were intrigued to uncover the observable nature of such a planet. Their study is now published in the journal Astronomy & Astrophysics. It shows that a molten Earth would actually be around 5% larger in radius than a solid Earth, and this is due to the difference in the behavior of molten versus solid materials at the extreme conditions of a planetary interior. “In essence, a molten silicate occupies more volume than its equivalent solid, and this increases the size of the planet,” Bower explains.

A difference that CHEOPS can detect

In the characterization of exoplanets outside our solar system and the search for potentially habitable worlds, researchers at the University of Bern are among the world leaders. Although detection of a rocky planet around a bright Sun-like star will remain beyond reach at least until the launch of the PLATO space mission in 2026, Earth-size planets around cooler and smaller stars such as the red dwarfs Trappist-1 or Proxima b are now set to take center stage. Interestingly, 5% difference in planetary radii can be measured with current and future observational facilities, notably the space telescope CHEOPS which was developed and assembled in Bern and will launch later this year. Indeed, the latest exoplanet data already provides an inkling that low mass molten planets, sustained by intense star-light, are present in the exoplanet catalogue. Some exoplanets could therefore be Earth-like in terms of similar building blocks, yet have different amounts of solid and molten rock to explain observed variations in planet size. “They do not necessarily need to be made of exotic light materials to explain the data,” says Bower.

However, even a totally molten planet may not be able to explain the observation of the most extreme low density planets. But on this the research team also has a proposition: Molten planets early in their history can outgas large atmospheres of volatile species that were originally trapped inside the magma in the interior of the planet. This could explain an additional decrease in the observed planetary density. The James Webb Space Telescope (JWST) should be able to distinguish such an outgassed atmosphere on a planet around a cool red dwarf if it is dominated by either water or carbon dioxide.

In addition to the consequences for observations, Bower, with his roots as an Earth Scientist, sees his study in a broader context: “Clearly, we can never observe our own Earth in its history when it was also hot and molten. But interestingly, exoplanetary science is opening the door for observations of early Earth and early Venus analogues that could greatly impact our understanding of Earth and the Solar System planets. Thinking about Earth in the context of exoplanets, and vice-versa, offers new opportunities for understanding planets both within and beyond the Solar System.”

When the second man on the moon, Buzz Aldrin, stepped out of the lunar module on July 21, 1969, the first thing he did was to unfurl the Bernese solar wind sail and plant it into the ground on the moon, even before the American flag. This Solar Wind Composition experiment (SWC), which was planned and evaluated by Prof. Johannes Geiss from the Physics Institute of the University of Bern, was the first great highlight in the history of Bernese space research.
Bernese space exploration has since then been working with the world’s elite. The resulting numbers are impressive: instruments have flown into the upper atmosphere and ionosphere on rockets 25 times (1967-1993), into the stratosphere on balloons 9 times (1991-2008), more than 30 instruments have flown in space probes, and a satellite was built (CHEOPS, start of the 2nd half of 2019).
The successful work of the Department of Space Research and Planetary Sciences (WP) from the Physics Institute of the University of Bern was consolidated by the foundation of a university competence center, the Center for Space and Habitability (CSH). The Swiss National Fund also awarded the University of Bern the National Centre of Competence in Research NCCR PlanetS , which it manages together with the University of Geneva.